JACK ROSE – LUCK IN THE VALLEY 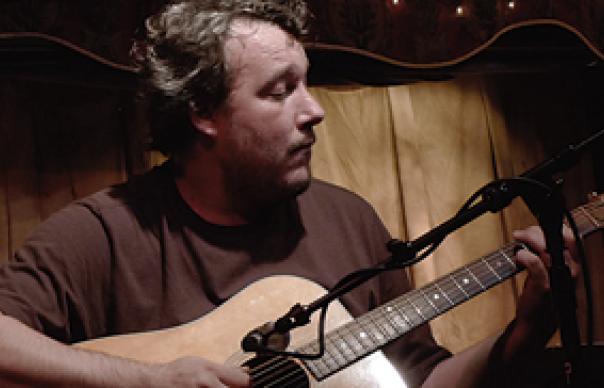 The internet can be very useful at creating an instant, infinite book of condolences, and when Jack Rose died of a heart attack on December 5 last year, at home in Philadelphia, an intimate portrait of the man emerged within days – hours, perhaps.

Reading through the poignant memorials at www.drragtime.com and www.arthurmag.com, among other places, it transpired that Rose was an obsessive pizza chef, a passionate fan of The Doors, and the sort of man who, according to his old label boss at VHF Records, “would fight you physically, if necessary, over which Grateful Dead albums were good and which were not”.

People also wrote, of course, about Rose’s brilliance and generosity as a musician, fleshing out the feelings of those of us who had merely heard him play, rather than known him personally. “He made the guitar seem so small and fragile,” wrote Elisa Ambrogio of the band Magik Markers, “like he could snap the neck in his hand as easily as a toothpick, but instead the sound combined the ferocity of a giant and the delicate, dogged perfection of something very complicated and small.”

Rose, 38, had spent the past decade carving out a reputation for himself as a discreet guitar virtuoso, at once scholarly and free-spirited. Of all the American fingerpickers ordained as heirs to John Fahey in the past few years, he was the most convincing, moving effortlessly and capriciously from blues to Indian ragas, from rackety hoedowns to celestial drones. He even had a wry, hokey alias, Dr Ragtime, to match Fahey’s Blind Joe Death and Blind Thomas (one Dr Ragtime record, incidentally, came out on 78rpm. Six copies exist). The critic Greil Marcus once described the Anthology Of American Folk Music as a musical evocation of “the old, weird America”, and plenty of musicians have subsequently tried to channel that weirdness. Rose, though, always seemed to explore ancient territory with vigour and good humour on his records – and Luck In The Valley, his last, is one of the best.

I first heard Rose play in 2001, when asked to review an album, Ayahuasca, by his old band, Pelt. For 40 minutes, the album contained otherworldly, enveloping hums. Then suddenly, the quartet morphed into a raw, human Appalachian folk band. By the last track on Disc One, “Raga Called John, Pt 1”, Rose was elegantly fingerpicking his way through the assorted creaks and drones.

For the rest of his career, on solo albums like Raag Manifestos and 2005’s outstanding Kensington Blues, Rose would pull off this trick again and again, finding a creative space where rootsy energy and an experimental imperative flowed naturally into one another. Unlike many of his contemporaries, however, Rose’s music was adventurous in a very earthy way. “We’re not dabbling with folk forms trying to make them contemporary or psychedelic,” he told Yeti magazine last year, talking about his collaboration with a shitkicking Virginian group called the Black Twig Pickers. “We can actually play our instruments without the ‘free folk’ label, which I think lots of other musicians use to cover up their lack of musical skill. Plus, we swing like a motherfucker.”

Luck In The Valley, too, mostly swings like a motherfucker. It has the same spontaneous, downhome spirit of 2009’s Jack Rose And The Black Twig Pickers album – indeed, some of that band (notably Mike Gangloff, another alumnus of Pelt) figure again. There are rollicking vintage rags, like WC Handy‘s “St Louis Blues” (written in 1914, first essayed solo by Rose on 2006’s self-titled album), Rose mixing it with a rambunctious pianist, Hans Chew, and a self-explanatory figure called Harmonica Dan. There are rapturous solo ragas, notably “Tree In The Valley” where, typically, Rose deploys enormous technical skill with an unfussy lightness of touch which, to non-players at the very least, seems little short of miraculous.

It is the opening “Blues For Percy Danforth” (a master player of wooden rhythm bones, apparently), however, that best exemplifies the lost genius of Jack Rose. The track begins with a heart-stopping flurry of solo guitar, again located somewhere indeterminate between Appalachia and North India, but a Jew’s harp and harmonica gradually slip into the mix, as well as a tampura. Intense, devotional and playful, “Blues For Percy Danforth” sounds like Rose collapsing musical boundaries on his own terms, just as his guru Fahey had done four or five decades earlier. The Old Weird America doesn’t need to be venerated, he seems to be implying one last time. It’s a place where you can have fun, of all things.