Jack White, Jimmy Page and The Edge on the magical powers of the guitar 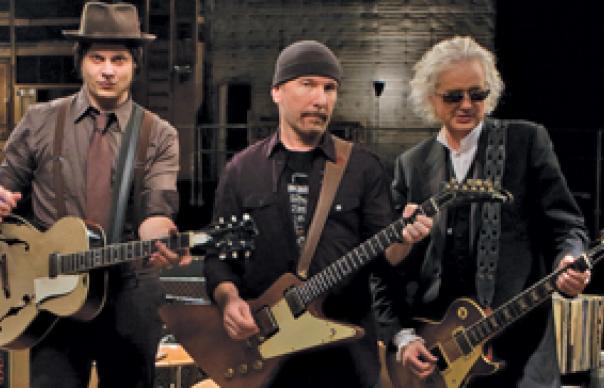 Guitar-wise we live in times that are at once nostalgic and aspirational. Every other middle-class teenage boy has a Stratocaster or a Les Paul in his converted attic bedroom, or he’s pretending to be Jimi Hendrix and Kurt Cobain on the Guitar Hero game.

Watching It Might Get Loud – Davis Guggenheim’s absorbing film about a summit meeting in January 2008 between three generations of six-string gunslingers – makes you realise how commonplace and dilettantish our rock dreams have become. In their varying ways Jimmy Page, The Edge, and Jack White had to struggle through early years of obsession and apprenticeship to get anywhere at all. Today’s Wii wunderkinder could learn a lot from their views and their memories.

Released on DVD after a limited cinematic run, It Might Get Loud is about the way the electric guitar and the amplifier combine to create a kind of superpower, transforming the player into a sonic god. Opening with a long shot of Jack White building an aboriginally primitive one-string instrument in his Tennessee backyard, the film shuffles back and forth along the timelines of – loosely – the Led Zeppelin, U2 and White Stripes stories, documenting the breakthrough moments in each man’s musical growth. Despite one or two awkward edits (e.g. The Edge talking about the Troubles, which dissolves inexplicably into Page remembering the day he quit the lucrative London session scene) the intertwined narratives work well.

Given that White is so clearly an heir to the blues-boom sorcery of sometime skiffle prodigy James Patrick Page, The Edge is something of an odd man out here, devoid of dirty blues spirit and barricaded by his effects apparatus. But the contrast between his hi-tech fetishism and the relative primitivism of Page and White in fact makes for a more compelling film. White uses the film partly as a platform to attack technology at its most gratuitously flashy, but concedes, en route to meeting his elders, that he intends to trick them both into giving up secrets he can steal. And however much one might revile U2, it’s hard to argue with the majesty of The Edge’s glassily chiming “infinite guitar”. The film’s most powerful moment might just be when it segues from cassette demos for The Joshua Tree to a full-blown stadium version of the “Where The Streets Have No Name”.

At one point Edge talks of riffs and sounds “invoking location”, and Guggenheim takes our august power trio back to key places on their musical journeys: Page to Headley Grange in a black cab; White to decimated southwest Detroit; Edge himself to the Dublin comprehensive where U2 formed. There are lovely moments of reconnection with influences: White listening to a hallowed Son House LP, Page breaking out in a huge smile at a slashing vibrato chord on Link Wray‘s “Rumble”. There’s also wild footage of Stripes template the Flat Duo Jets and priceless home-movie scenes of Zeppelin at play in Headley Grange’s garden.

Along with drooling dolly shots of necks and frets and gleaming pickups, there is conversation between the three men on an LA soundstage and enjoyable jams on “Dead Leaves And The Dirty Ground” and the ominous Delta slide-swarm of Zeppelin’s “In My Time Of Dying”. Though White is the commanding star of the show – as the only frontman of the three, that’s to be expected – he’s duly deferential, not to mention rapt as Page cranks out “Whole Lotta Love”. Resembling a genial Asian Zen master, Page’s timing has become a tad fuzzy but the feel is still there. “Whether I took it on or it took me on, I don’t know,” he says of the primal urge to transform oneself through amplification. “The jury’s out on that. But I don’t care: I’ve just really, really enjoyed it. That’s it.”

Occasionally It Might Get Loud turns into one of the more plodding BBC4 docs – at the juncture of prog-rock pomposity and punk insurrection, for instance – but in the main it’s an engaging study of guitar heroism as a shared passion. Listening to Jack White on his back porch, throttling his customised Gretsch and wrenching emotion from its hollow body, makes you realise how many possibilities the hoary old thing still offers.