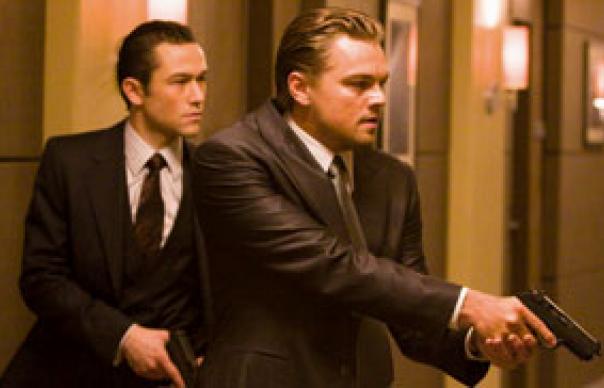 It’s often easier to admire Christopher Nolan’s films, rather than really like them.

Memento, Insomnia, The Prestige and his two Batflicks are all tremendous movies, fizzing with ideas, but there’s something quite clinical about them. For all the tricksy puzzles and narrative rug-pulling, they’ve conspicuously lacked emotional centres.

Perhaps it’s because Nolan rarely makes his protagonists easy to like. You might be reminded of Guy Pearce’s jittery Leonard Shelby in Memento, Insomnia’s sleep deprived Will Dormer – or the sociopathology of Bruce Wayne. None of them, in their ways, are especially nice people.

Of course, we shouldn’t necessarily worry as to whether or not you’d want to go for a pint with his characters: De Niro and Nicholson have made careers out of playing, effectively, unlikable protagonists, and we still find much to enjoy in Taxi Driver or Five Easy Pieces.

I think, though, that without a sympathetic character to lead you down Nolan’s rabbit holes you **watch** rather than immerse yourself in his films.

This is something Nolan attempts to address here with Inception, his first film since The Dark Knight, and as non-blockbuster a blockbuster as you’re likely to find. As ever, the concept is high. Leonardo DiCaprio plays Cobb, a corporate spy in a near-future where technology allows him to enter the dreams of CEOs and steal information. The whole thing is played out like a heist movie: Cobb and his team of specialists (Juno’s Ellen Page, 3rd Rock From The Sun’s Joseph Gordon-Levitt and Bronson’s Tom Hardy) drug their target, enter his dreams and assume various guises designed to fool the target into giving up sensitive information.

But Cobb has some problems. First, he is quite literally haunted in dreams by the ghost of his late wife, Mal (Marion Cotillard), who has a nasty habit of turning up in the vital stages of a mission to endanger the whole enterprise. Second, he is a wanted man, and any attempt to return to American soil to be reunited with his two children is likely to result in his arrest.

Which is where Ken Watanabe’s Saito comes in. He claims he can clear Cobb’s record, on one condition. He wants Cobb to pull off a unique job: to implant an in the head of a business rival, Fisher (Cillian Murphy), who has recently inherited a corporate empire from his late father. To do this, Cobb and his team plan the gig of a lifetime. It involves drugging Fischer on a 10-hour plane journey and taking his through three successive layers of dreaming – that’s three dreams, running concurrently. If all goes well, they’ve got a story for their grandkids. If it doesn’t, then they’re lost forever in a kind of dreaming purgatory. No fun there.

For all it’s multiple dream states and slippery narrative ingenuity, Inception is a remarkably straightforward film. We’re used to a hero embarking on One Last Job, assembling a team of experts for a near-impossible mission. It’s these kind of familiar genre tropes that ease us into the story; and Nolan – at last! – provides us with a hugely sympathetic lead. In many respects, Cobb is an echo of DiCaprio’s Teddy Daniels in Shutter Island – another troubled soul beset by his own problems with reality. The scenes he shares with Mal in the dreaming state are fascinating – by turns angry and reconciliatory, full of recriminations and tears. There’s a queasy realization that if Mal exists only in Cobb’s subconscious, it must be his subconscious that’s animating her, giving her voice. In the deepest levels of his own subconscious, he’s forcing himself to relive her final moments. It’s quite fucked up.

Nolan orchestrates the multiple action strands with tremendous dexterity. He arranges his three concurrent dream states like Chinese boxes, each of them occurring at different speeds; what lasts five minutes in one dream covers 10 hours in another. You have to admire the cheek of Nolan’s dream logic, the arch cleverness he deploys that allows him to play around with timeframes. The 20 seconds it takes in one dream for a bus to hurtle through a crash barrier into a lake is spun out to hours in another dream, weeks in a third.

Nolan clearly has great fun with the action stuff – zero gravity fights in a hotel corridor, an assault on an artic fortress and a car chase through a dreamed city are all cracking – and it all looks as spectacular as you’d hope. Particularly when expressing the weird nuances of dreams, MC Escher-style staircases that loop into themselves and a Parisian street that literally folds in on itself.

With so many summer blockbusters predictably drawing from existing materials – comics, video games, movie franchises – it’s certainly a relief to find a movie that feels fresh. It’d be disingenuous to suggest this is revolutionary stuff – like I say, it’s a heist movie with bells on – but it is artfully delivered and extremely entertaining. Nolan continues to grow as a filmmaker, and his ability to balance quirky subjects with the commercial demands of the studio system is something, certainly, to cherish.
MICHAEL BONNER