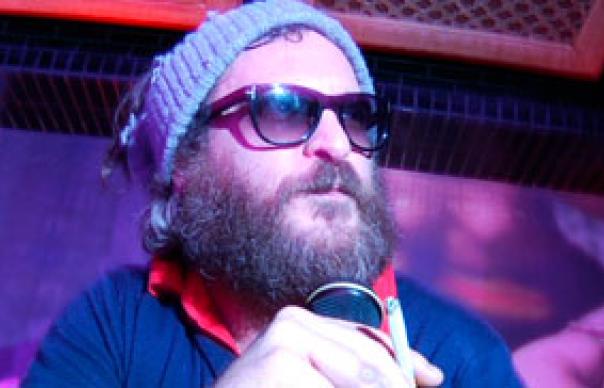 “I don’t want to play the character of Joaquin Phoenix anymore!” wails Joaquin Phoenix early in this, um, documentary. Here is a man, after all, whose life has been lived on camera since childhood – we see family video footage from 1981 of the seven year-old Phoenix diving into a rock pool, skip to a few years later and it’s the entire Phoenix clan on a local TV talent show, jump then to a montage of Phoenix running the gauntlet of chat shows promoting Walk The Line, each interviewer asking identical questions. “I’m stuck inside this fucking self-imposed prison of characterisation!” He rages, and abruptly quits acting, grows a beard, puts on weight and embarks on a career in rap. He is J-P, and his ambitious intention is to make the “hip-hop ‘Bohemian Rhapsody’.”

As Curb Your Enthusiasm and Entourage have repeatedly demonstrated, there is much fun to be had watching celebrities – actors, musicians, filmmakers – playing fictionalised versions of “themselves”. I’m Still Here, directed by Phoenix’s brother-in-law Casey Affleck, purports to be the genuine artefact, however; a warts-and-all documentary following Phoenix on his year-long meltdown as he pouts, strops, gets stoned, snorts cocaine off an escort’s breasts, is defecated on by a vengeful personal assistant and makes rap music of unsurpassed awfulness.

If this is indeed a candid portrait of Phoenix in freefall, it surely amounts to career suicide for Phoenix, who comes over as spoilt, indulgent and arrogant, a slurring and befuddled mess who can’t even open a fire escape door without assistance from one of his handlers. It’s also ethically questionable: if your friend and brother-in-law was undergoing such a drastic breakdown, surely the first thing you’d reach for is the phone to call in professional help, not a video camera.

Perhaps it’s a hoax, a sly send-up of celebrity breakdowns and our obsession with the m . We see Phoenix frequently berate his two assistants – the level-headed, quietly spoken Larry, and Antony, a rake-thin Yorkshireman who some frantic Googling reveals to have been a member of – God help us – Spacehog. While Phoenix looks like a cross between late period Jim Morrison and Vincent Gallo – variously self-pitying, narcissistic and high – they neither comment nor intervene. Though they do, frequently, show their penises. There are fights, cocaine, empty periods of nothing, interludes in Phoenix ‘s home studio, cocaine, tantrums, cocaine and on it goes. In other words, all the expected excessive behaviour is laid out before us.

But the best scenes in the movie find Phoenix interacting with people outside his immediate entourage. As one of his final promotional obligations as an actor, Phoenix appears on the Letterman Show, dressed in black, wearing sunglasses and chewing gum, matted hair and beard styled by Crazy Meg of Bedlam. He replies to his host’s questions with monosyllabic mumbles; it’s excruciating stuff, and climaxes with Letterman saying, “Joaquin, I’m sorry you couldn’t be here with us tonight.” It reminds me of Crispin Glover’s similar stunt, in 1987, when the actor, seemingly agitated to the point of hysteria, nearly kicked Letterman in the head during an edition of the show.

There’s Ben Stiller, who comes to Phoenix’s Malibu home to ask him to appear in Greenberg; a fractious five minutes follow before Phoenix accuses Stiller of playing up for the cameras – “This is who I am! I’m not doing **Ben Stiller**!” insists the comic (some months later, Stiller presents an award at the Oscars dressed just like Phoenix, claiming he’s retiring from comedy). The actor Edward James Olmos – a family friend, it seems – visits Phoenix and dispenses some New Age spiritual gubbins about raindrops on top of a mountain that almost reduces Phoenix to tears. By far the best moments are a couple of encounters with Sean “P Diddy” Combs, who “might be interested” in producing Phoenix’s rap album. Combs is just the right side of brilliant here, patiently explaining to the wired Phoenix that the record will cost, you know, money to make – studios, musicians, engineers, equipment don’t come free.

I think that I’m Still Here is neither a verite portrait of an actor in decline, nor simply a hoax, but instead a diverting piece of Method-inspired performance art. It’s interesting how the title seems to play on Todd Haynes’ Dylan biopic, I’m Not There; another portrait of shifting identity. Indeed, Godard’s question – “Qui êtes-vous, Monsieur Bob Dylan?”- from Masculin Feminine could easily be applied here to Phoenix. So, is this the real Joaquin Phoenix we’re seeing here, or a fictionalised iteration of Phoenix enacting an existential showbiz drama, the kind of thing Phoenix has probably seen first hand himself? The latter, I suspect.