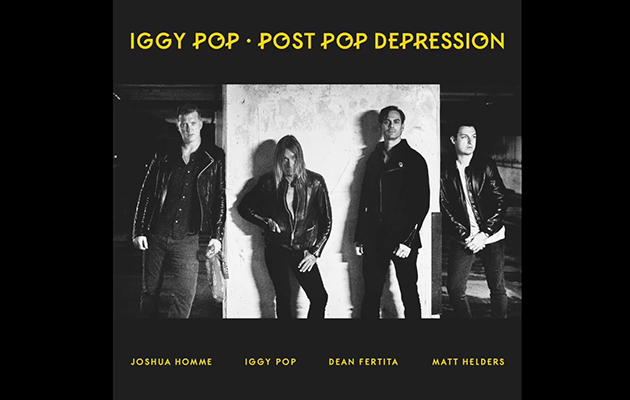 Having just about held it in for 38 minutes, Iggy Pop‘s personal dam bursts in the closing moments of his 17th solo album, the 68-year-old unleashing an extraordinary tirade at the climax of escape fantasy “Paraguay”.

“You take your motherfucking laptop, and just shove it into your goddamn foul mouth, and down your shit-heel gizzard, you fucking phony two-faced, three-timing piece of turd,” he rasps breathlessly. “And I hope you shit it out with all the words in it, and I hope the security services read those words, and pick you up and flay you for all your evil and poisonous intentions, because I’M SICK and it’s YOUR FAULT, and I’m gonna go heal myself now.” Amid the unredeemed darkness of Post Pop Depression, that final phrase may represent the sole note of hope.

Recorded in secret with Queens Of The Stone Age’s Josh Homme and Dean Fertita as well as Arctic Monkeys drummer Matt Helders, the mission may have been to recapture the wildness of Pop’s Berlin-era albums with David Bowie – The Idiot and Lust For Life. However, Homme’s superbly Bowie-esque backing vocals do little to rekindle the self-possessed optimism of those records. Post Pop Depression is unremittingly bleak; a meditation on mortality and regret which – unlike the standard post-Time Out Of Mind outing by a Saga holiday-aged pop star – offers no soft-focus reverb, and precious little comfort either side of the grave.

Talking to the New York Times, Pop was eager to put some distance between himself and his album’s dour side. “I had a kind of character in mind,” he noted. “It was sort of a cross between myself and a military veteran.” However, the anger, the exhaustion here sounds very much his own. “I’ve shot my gun, I’ve used my knife,” he mutters sorrowfully on “American Valhalla“. “It hasn’t been an easy life.”

Times have indeed been tough for Pop; even before Bowie’s departure this January, the deaths of fellow Stooges Scott and Ron Asheton (in 2009 and 2014, respectively) had robbed him of key co-combatants. And, in between the insurance ads, his attempt to subvert his ‘godfather of punk’ image with oddball chanson collection Après foundered when his record label, Virgin EMI, refused to release it. “They would have preferred that I do a rock album with popular punks, sort of like: ‘Hi Dad!'” he seethed, as he snuck Après out independently in 2012. “What has a record company ever done for me but humiliate and torment and drag me down?”

Humiliation is everywhere on Post Pop Depression; the down-on-her-luck beauty of the lava-lamp-lit “Gardenia“; the cowed wage slave trudging weekend-wards on “Sunday”. A crushing, low-slung guitar riff on “In The Lobby”, meanwhile, accompanies a depiction of a streetwalking cheetah going joylessly through the motions. “And it’s all about the edge, and it’s all about the dancing kids, and it’s all about the sex, and it’s all about done,” Pop smoulders, concluding bitterly. “I follow my shadow tonight.” Berlin memoir “German Days“, for its part, recalls not the excitement of exploring the city’s ripped backside but a world of crappy clip joints. “Glittering champagne on ice,” Pop ululates over a lugubrious beer-hall squelch. “Garish, overpriced.”

The past and the present are sullied, but the future is grimmer still. Ennio Morricone death bells clang over the sullen “Chocolate Drops” and the hateful “Vulture”, as Pop attempts to shoo away those who would one day pick at his bones, while the raw, powerful “American Valhalla” confronts the afterlife with a shudder over a glowering bass thud: “Is anybody in there? And can I bring a friend?”

The characters depicted here, however, might be too far gone for friendship, and wobbly BBC Radiophonic keyboards on opener “Break Into Your Heart” cannot mask the misanthropy within; Pop’s search-and-destroy conclusion on sexual partners: “Break them all, take them all, fake them all, steal them all, fail them all.”

However, if the cruel world of Post Pop Depression is eat or be eaten, Pop knows he is no longer predator but prey. Nick Cave‘s Grinderman project explored male-pattern entropy with a wink, but with this wounded howl of a record, Pop stubbornly refuses to see the funny side. Grimly compelling, it concludes with Pop’s “Everybody’s Talkin'” of the damned, “Paraguay”, its protagonist trudging off to the jungle with what remains of his Yankee dollars. “I’m going where sore losers go,” he grunts. “To hide my face and spend my dough.” Like the rest of Post Pop Depression, it sounds like a resignation speech.

Q&A
Dean Fertita
You recorded in secrecy in Joshua Tree, California; why was that?
Nobody needed to know what was happening and if we didn’t like what we were doing, we knew we could just drive out into the middle of the desert and bury it and no-one would ever know it existed.

The lyrics are very dark. Did that surprise you?
If you had looked at this on paper and seen the guys who were on the record then you would have expected it to sound a certain way, but at this stage of his career we felt we could make a record with him that relied more on the content being heavy. We think he is maybe one of the most underrated lyricists in American music – he is so good at expressing something that people can understand simply but there is a lot of subtext there.

Iggy’s rant at the end of “Paraguay” is incredibly powerful. How did it come about?
That was absolutely spur of the moment. We had done three or four versions of that song and each one was completely different. He had no lyrics in front of him. I was ecstatic that we had a moment like that. There’s been some talk within our little group that this could be his last record, but you don’t know for sure. My hope is that he is super inspired by what we did and makes ten more records, but if it is the last thing he does, I am just proud to have been in the room when he said what he said. And if he stops, he stops on a high.
INTERVIEW: JIM WIRTH