Here we are now, appropriate us! How Seattle responded to the grunge explosion 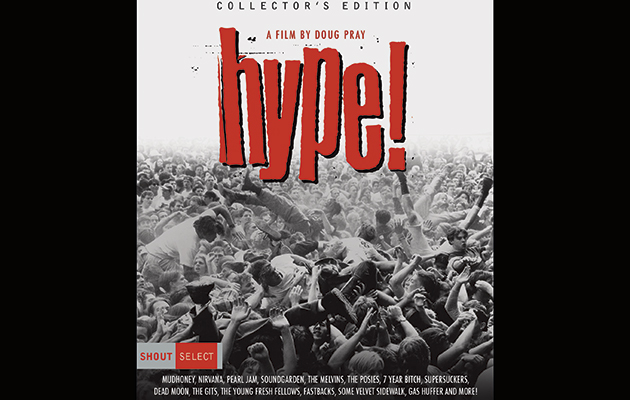 “We were the guys in high school that people used to beat up, and we couldn’t talk to the pretty girls,” Van Conner explains partway through the 1996 music documentary Hype!. “We’re nerds, goddammit!” He’s talking about his band Screaming Trees, but the bass player is also talking about nearly everybody in the Seattle music scene, none of whom resembles the traditional rock star. There’s a chuckle in Conner’s voice, but also pride: rather than the angst-ridden young men long identified with grunge, most local musicians were just regular people driven indoors by the constant rain and a fanatical love of rock music. They weren’t bred to be celebrities. They were rock geeks.

That discrepancy between how Seattle saw itself and how the rest of the world saw Seattle is the main theme of Hype!, directed by Doug Pray (Scratch, Surfwise) and now out in a 21st- anniversary Blu-ray edition. Anyone hoping for a nostalgic tour of the city will be sorely disappointed. Released in 1996 but filmed just as the aftershocks of grunge were dying down, the film is highly sceptical of the attention given to the local scene, and most of the talking heads refuse to surrender any further autonomy to major labels and magazine photo spreads.

Seattle had long sat in a remote corner of America, half-forgotten by the rest of the country and ignored by touring bands reluctant to trek so far out of their way. As the film explains, that isolation, coupled with the rainy climate, created a rabid music scene with a staunch DIY ethos and a surprisingly diverse range of sounds demonstrated here by kinetic live clips from the Monomen, Blood Circus, Dead Moon and, yes, Nirvana. The Posies and The Fastbacks couldn’t have been more different from Tad and Mudhoney, yet they all played the same clubs for the same fans and released records on the same small labels: Estrus, K, PopLlama, Sub Pop. In fact, one of the most entertaining passages in Hype! is a supercut of musicians listing short-lived, obscure but beloved local bands, some of which existed only for a handful of shows and a 7-inch, but not long enough to regret their choice of names: Bundle Of Hiss, Skin Yard, Cat Butt, Butt Sweat.

Just as that scene seemed to be waning, a second wave of bands sprang up in their wake, including a trio from nearby Aberdeen, Washington, whose drummer pounded hard, whose bass player thumped out melodic sludge, and whose singer had an esophagus lined with rusty barbed wire. They signed with a local label called Sub Pop for their first record, called Bleach, and graduated to a major label for their second record, Nevermind. When that album made them stars, every A&R guy and music journalist headed west to find more bands like Nirvana. When they didn’t find them, they essentially invented them.

At this point Hype! becomes something like a zombie film, with the last humans boarding themselves up in a farmhouse to battle the invading horde. In the rush to capitalise on the new youth culture that grunge represented, Seattle was exploited and then distorted, a vibrant scene pared down to a handful of flannel-clad bands writing introverted anthems about inner turmoil and emotional anguish. Almost everyone interviewed for the documentary expresses feelings of disenfranchisement and bitterness, as though their autonomy has been wrenched away from them. They brandish irony as a defence mechanism, whether it’s Sub Pop receptionist Megan Jasper trolling the New York Times with made-up slang (“Swingin’ on the flippity-flop”) or producer Jack Endino embracing  the goofy job title “Godfather Of Grunge”.

These artists wielded irony as a weapon against pop-cultural gentrification, although it easily curdles into something equally destructive. Sub Pop founders Bruce Pavitt and Jonathan Poneman are portrayed as overly clever businessmen appropriating local DIY culture and marketing their label with LOSER T-shirts. All that distinguishes them from the invading forces is a smirk and a local zip code. As it explores this particular mindset, Hype! becomes more than just a documentary about a music scene. Especially viewed from the perspective of the late 2010s, the film is an artefact of a very different era and a very different attitude toward success. Pray might be criticised for not incorporating other viewpoints into his film, for not interviewing fashion designers, rock journalists and record execs to offset the suspicions of the locals. By excluding other points of view, however, he demonstrates how history might be written by the losers.