Deluxe boxset from Sheffield futurists who can never escape their past 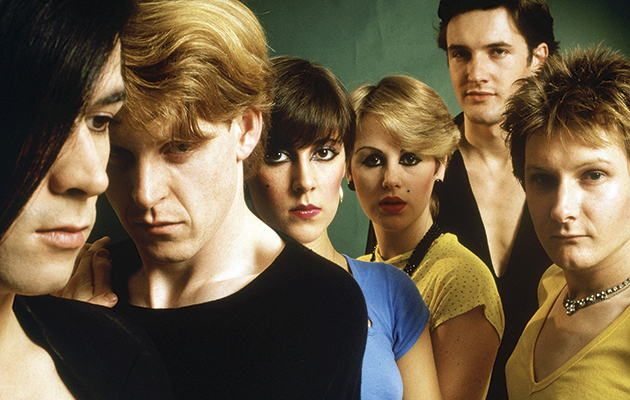 Despite a career spanning almost 40 years, The Human League will always be defined by their radiant first decade, a journey from Bowie-endorsed synth-punk outsiders to multi-million-selling electro-pop superstars. This sumptuously repackaged and remastered anthology, spreading 47 tracks across triple CDs or vinyl discs, is inevitably stronger on the early years. But each chapter contains hidden gems and bizarre plot twists that defy the kind of cosy, reductive narrative seen in BBC Four retro-pop documentaries.

Taken in totality, A Very British Synthesizer Group chronicles the remarkable saga of a band who have endured despite their self-confessed limitations as musicians, despite multiple lineup changes, despite breakups and breakdowns and career slumps. They scored worldwide hits, including UK and US Number Ones, but remain firmly rooted in Sheffield. Even today, after selling 20 million albums, there is something of the blunt-talking, emphatically northern, working-class autodidact about Philip Oakey, Joanne Catherall and Susan Ann Sulley. This attractive quality has propelled them to sublime peaks of bloody-minded pop genius and extreme nadirs of naffness. Sometimes within the same song.

When computer operators Martyn Ware and Ian Craig Marsh formed Britain’s first all-electronic band in 1977, initially under the achingly apt name The Future, they recruited Oakey as singer more for his striking looks than his vocal abilities. The nascent League forged a vivid post-industrial sound that distilled Kraftwerk and Kubrick, Bowie and Ballard into brilliantly weird dystopian electro-glam singles like “Being Boiled” and “Empire State Human”. They also paid skewed homage to their cult rock heroes with starkly rebooted synth versions of Mick Ronson’s post-glam classic “Only After Dark” and Iggy Pop’s zombie-punk prowler “Nightclubbing”. All are included here.

When internal tensions split the band in 1980, Oakey was left without main songwriters Ware and Marsh. In the face of critical hostility and mounting debts, the singer hastily recruited teenage schoolfriends Sulley and Catherall from the dancefloor of Sheffield’s Crazy Daisy nightclub and a new multi-vocalist incarnation of the Human League was born. Working with techno-savvy producer Martin Rushent, the band finally realised Oakey’s populist electric dreams with their 1981 album Dare, a hit-packed triple-platinum smash and still a beloved high-water mark of British synthpop.

From the scowling, totalitarian hedonism of “The Sound Of The Crowd” to the cat-meowing synths of “Love Action”, the hits of Dare still sound both instantly accessible and gloriously eccentric. Initially opposed as a single release by Oakey, the blockbuster “Don’t You Want Me” is now enshrined as one of Britain’s unofficial national anthems, and one of the most rousingly bitter songs ever to top the charts on both sides of the Atlantic.

The League followed Dare with a run of mainstream hits, reaching Number Two with both the silky synthetic Motown of “Mirror Man” and the stern but catchy “(Keep Feeling) Fascination”. Next came an audacious detour to Minneapolis to work with platinum-plated R&B producers Jimmy Jam and Terry Lewis. Famous for their collaborations with Janet Jackson, Michael Jackson and Prince, the duo’s hands-on perfectionist methods created studio tension and uneven music. But while the boxy mid-Atlantic synth-funk of “I Need Your Love” now sound bloodless and dated, the sumptuous love ballad “Human” remains a left-field League classic, earning the band their second US Number One.

The League scored their last Top Ten single to date, the lightweight but agreeably effusive “Tell Me When”, in 1995. Sidelined by Britpop and major-label politics in the late 1990s, the band have spent most of the last 20 years as an indie act, chiefly surviving as live performers. Even so, their most recent album Credo, released in 2011, was a partial return to their Yorkshire futurist roots. Produced by Sheffield retro-synth fetishists I, Monster, disco-tronic tracks like “Night People” and “Sky” marry vintage analogue noises with contemporary electro signifiers. Brash but fun.

The deluxe boxset of A Very British Synthesizer Group comes with a hardcover book, photos, memorabilia and an extra DVD featuring all the band’s videos and BBC appearances. Oakey’s ever-changing, asymmetrical hairstyles provide much amusement here. But of course, the serious fan-bait in this package lies with the 25 previously unreleased tracks, mostly demos and remixes.

Inevitably, the early electronic material holds the most interest, unadorned analogue sketches that often have more warmth and texture than their official versions. A case in point is a dry run for “The Path Of Least Resistance”, where Oakey’s soulful crooning sounds more grainy and emotive than the deadpan foghorn bellow that later became his signature. “No Time”, a prototype for the 1979 track “The World Before Last”, is a spine-tingling experiment in spoken-word sci-fi storytelling, while an embryonic version of the 1984 single “Louise”, conceived as a “sequel” story for the doomed lovers in “Don’t You Want Me”, also has a relaxed, rueful tenderness lacking in its anodyne studio sister.

Sprawled across 40 years of highs and lows, A Very British Synthesizer Group is inevitably bumpy in quality, but still rich in pleasant surprises, and shot through with the bloody-minded punk genius that defines so much music from the People’s Republic of South Yorkshire. Buried treasures from a national treasure.

Q&A
PHILIP OAKEY
At the start, were The Human League an experimental band or a pop group?
We certainly were at least half an experimental band. We were a bit split because, really, we were a prog band. We loved Genesis and Van der Graaf Generator, but we always liked pop music too. When Martyn Ware told me at school that he liked Slade, it was like slapping me in the face! You didn’t admit you liked chart bands if you liked prog. But we did like pop. At the same time as hoping we would be like Can or Neu!, we also sneakily wanted to have hits.

You rarely repeated yourself musically. Was that deliberate?
We had a policy that as soon as we’d done Dare, we wanted to do something different. Right from the start, we used The Beatles as a model, and The Beatles never came out with a single where you went: ‘oh yeah, they’ve done Hey Jude again’. We wanted every single to not look like we were trying to emulate the last big hit.

You still live in Sheffield. Did you never consider moving to London?
No. We weren’t really tempted by London. We weren’t particularly impressed with what a lot of people think is enjoyment there. They think you can only be happy in a place where Kate Moss turns up or something. We didn’t ever really believe that. We almost thought it was a bit shallow to want to be in that gang.

Do you still consider yourself a punk? A futurist? A pop star?
More than anything, I considered myself a democrat until recently. But I’ve been a bit shaken by the Brexit stuff. I’m a TV news fiend, but I’ve more or less stopped watching now because we seem to be in some strange Pol Pot era where people want to do punk voting.
INTERVIEW: STEPHEN DALTON