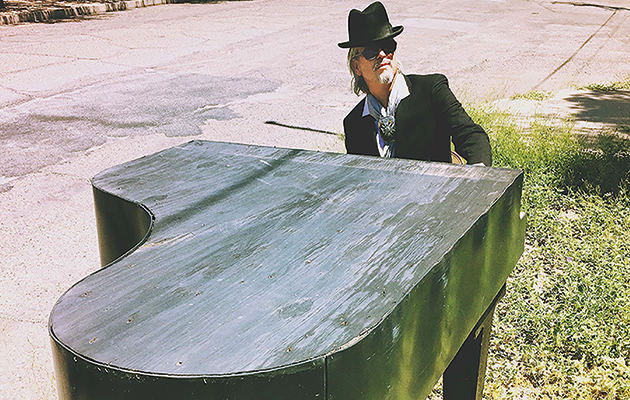 Intentional or not, Howe Gelb has found himself confronted with his own musical legacy in recent times. A strange situation, perhaps, for someone who’s spent so much of his life busying himself with the present, be it as captain of Giant Sand, The Band Of Blacky Ranchette, various spin-off projects or as a solo artist. 2015’s Heartbreak Pass coincided with the 30th anniversary of Giant Sand’s debut, Valley Of Rain, which itself followed a mammoth boxset and reissue campaign.

In his own inimitable way, Gelb untied the bunting from the party celebrations by declaring that “between the exponential cubed expansion of the band to the sheer audacity of its three-decade lifespan, Giant Sand are now dead.” As if to emphasise the point, he’s swiftly returned to his solo career and made Future Standards, a jazz-blues album that serves as an attempt to write more songs that might last through the ages. It’s a mostly minimal affair, Gelb either alone at the piano or joined by guest vocalist Lonna Kelley, with a thin smatter of double bass and brushed drums. And while the subject matter (romantic love) may be familiar territory for a bunch of tunes designed for warm brandy and candlelight, Gelb’s take on things is reassuringly leftfield. It’s doubtful, for example, whether Hoagy Carmichael may have ever considered framing a ballad with the lines, “Clarity, considered a rarity/Hitherto these parts around here,” as Gelb does on “Clear”. Or, as with the more cynical “May You Never Fall In Love”, urged us to “Let the others spend all their whiling/Contemplating the apropos.”

Gelb’s long-held fascination with words, particularly the way certain ones rub up against one another or encourage an allusive phrase, usually stretched over an odd meter, is a joy throughout. As is his deceptive way with a graceful melody, his drowsy voice slips through these songs like smoke. Future Standards is both an intimate, low-key experience and a highly welcome new detour.