The director of 'Hero' returns with Zhang Ziyi and Takeshi Kansehiro in another breath-taking Martial Arts epic. 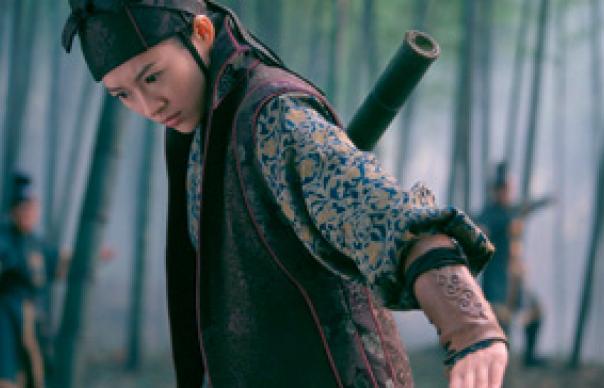 To release one breath-taking, genre-defining Martial Arts epic in a year is an impressive achievement; to release two might be considered little more than a vulgar display of self-indulgence. But after the eye-popping dazzle and explosive spectacle of Hero, director Zhang Yimou returns with yet another beautifully-wrought incursion into classical Chinese folklore. And, incredibly, it’s even better than its predecessor. Yimou is in a league of his own, and you get the sense that he knows it – such is the deftness and confidence with which he guides us through this sensuous, sweeping story.

We’re in 859AD, and rebel insurgents the House Of Flying Daggers are locked in a protracted and bloody internecine warfare with the corrupt Tang dynasty. Two local sheriffs – Leo (Lau) and Jin (Kaneshiro) – are charged with bringing in the rebels’ new leader, and suspect a blind courtesan, Mei (Hero co-star Ziyi) is the daughter of the Daggers’ old leader. Leo arrests Mei, but she stubbornly refuses to co-operate. So Jin, pretending to be a warrior sympathetic to her cause, effects her “rescue” and the two head off to join up with the Daggers, with Leo tailing them at a discreet distance. Leo and Mei make a handsome couple, and it’s no surprise that – when not dodging bamboo spears – they start falling for each other. Which makes things very difficult with Mei is finally forced to reveal a very surprising secret.

The debate over which of Zhang’s two masterful pieces of cinema is the better is one that will run and run, but for my book House Of Flying Daggers just takes it. Hero has a stylised beauty and vivid colours that practically sing to you. But there’s something austere and emotionally restrained about the film. Daggers, meanwhile, is all about passion – about crazy, reckless actions taken in the name of politics and love. It’s sexy, kinetic and it flaunts its state of the art digital special effects (those daggers really fly and the camera skims along behind them). It also has one of the coolest titles in the history of cinema. The fight choreography is flawless, the set pieces make you want to stand up in your seat and cheer.
It doesn’t get much better than this, believe me.