HERE’S A HEALTH TO THE BARLEY MOW 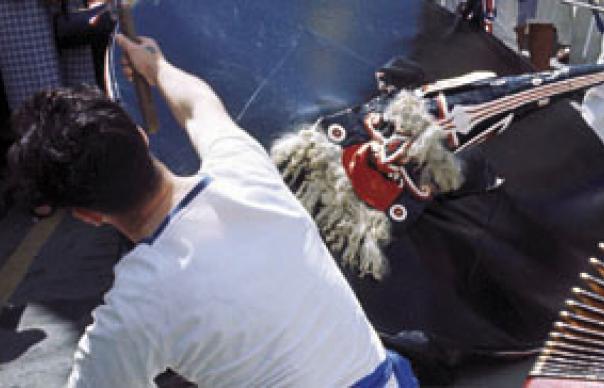 In a Suffolk pub, an announcer is calling the regulars to order with imposing gravitas. A Sunday drink and sing-song has slipped into a serious and necessary ritual, one that magically propitiates the harvest gods by wishing luck to all the measuring pots that will contain the beer, and by drinking a health to the dispensaries of this golden ale, the landlady and landlord, who obligingly beam into the camera as they work their infernal levers.

This is the famous Ship Inn at Blaxhall, recorded in Here’s A Health To The Barley Mow (subtitled ‘A Century Of Folk Customs And Ancient Rural Games’, the 1952 documentary that gives the title to this magnificent two-disc collection that spans a century of British folkloric documentaries and short films. Surprisingly, nothing like it has ever been compiled before; in folkloric terms, this rich new hoard of Anglo-Saxon gold bears the same relation to today’s ‘folk’ – the likes of Mumford & Sons – as a Fulani death march does to the glossed world pop of Youssou N’Dour.

It opens with some of the rarest and most delicate treasures of English folk heritage. Collectors Cecil Sharp, composer George Butterworth and their colleagues, Helen and Maud and Karpeles, were preserved in 1912 on Kinora spools, a kind of crude cinematic flip-book. These are the only known moving pictures of Sharp, and the foursome execute short sequences of country dancing, set to a new fiddle accompaniment by violinist Laurel Swift. There’s an endearing bumblingness about it, with Sharp and Butterworth colliding at one point and sharing a chuckle. I began my book Electric Eden with a description of seeing these films screened in London, with precisely the same live accompaniment, and the swooning sensation of time-travel it inspired. The sensation is hardly diminished on DVD, and the pleasure is enhanced by the new knowledge that these sequences were shot in the grounds of Kelmscott Manor, the ancient country pile once owned by William Morris.

The two DVDs are divided into four themes: “Dances And Songs”, “Extreme Sports”, “Mummers And Hobbyhorses” and “All Manner Of Customs”. Among the first, we find films from the 1920s and ’30s, including the grotesquely endearing fiddler Sam Bennett leading roister-doisters in the grounds of Sir Peter de Montfort’s House near Henley, built in 1220 (the affluent owners stroll into the frame, feigning interest while picking at their rosebushes). The grittier High Spen Sword Dancers and Bacup Coconut Dancers display English folk dance with the bells off; dancers with sticks and swords creating fluctuating configurations that transmit geometric patterns through time immemorial. Much of the appeal comes from the weird ambiguity between the innocence and fun on show, and the way these mysterious ancient actions have temporarily possessed people, like a brain-colonising fungus.

Wake Up And Dance, from 1950, rendered in ravishing vintage-postcard colour, was part of a propaganda drive for members by the The English Folk Dance and Song Society (EFDSS), showing a folk parade having a pied piper effect on the townsfolk. The sense of a portal to dream-Albion continues up to 1989’s The Flora Faddy Furry Dance Day, experimentally edited, intercutting Super-8 and rostrum shots of esoteric engravings with current footage of Britain’s largest folk fair in Helston, Cornwall.

The ‘extreme sports’ and customs comprise a vast resource of glimpses of the unknown Britain, that occult, heathen country that sometimes pops into view in the novels of Thomas Hardy, films like The Wicker Man and Jez Butterworth’s play Jerusalem. Suffice to say that Tar Barrel Rolling In Ottery St Mary and The Burry Man Of South Queensferry, both shot around 2000, are some of the most atavistic pieces of film anywhere. But the set would be worth it on its own for the inclusion of two films produced by Peter Kennedy in the early 1950s, Walk In St George and the Alan Lomax-directed Oss Oss Old Oss. Filmed in Dorset and during Mayday celebrations in Padstow, Cornwall, these Technicolor shorts paint England’s village culture in wonderfully alien, yet radiant hues. The magic of it is, that these films show a Britain instinctively known but rarely seen. Like the folk process itself, it’s as much about reminding us how memories are created and prolonged, and learning to remember anew. You’ll never look at a morris dance the same way again.
Rob Young