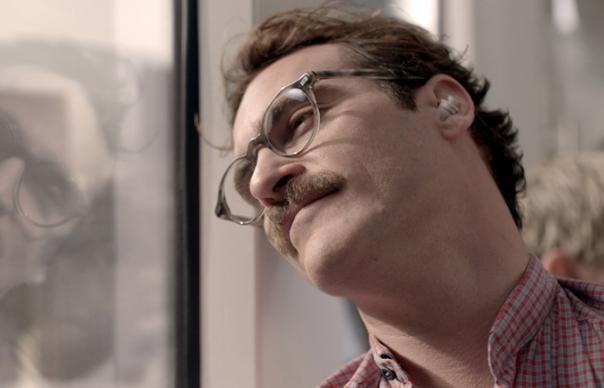 In the future, as depicted by Spike Jonze, no one will wear belts. This is a place of gently muted colour schemes, discreet facial hair and where poverty appears to have been eradicated – but, alas, for all its Utopian charms, the denizens of future Los Angeles are still susceptible to broken hearts. One such individual is divorcee Theodore Twombly, who finds therapy from his broken marriage working at BeautifulHandwrittenLetters.com – composing love letters for strangers to send to their spouses. Poor, lonely Theodore – that is, until he meets Samantha, and the two fall in love.

Samantha is a computer operating system, no less: Theodore’s IT girl, for want of a better pun. Jonze presents Theodore and Samantha’s relationship as perfectly natural – Her deploys all the tropes of the conventional rom-com – which forces a comparison between the director’s beautifully designed fantasy world and our own increasing dependency on technology. Can a man really fall in love with a computer – and do the emotions of an artificial intelligence qualify as real? “Are these feelings real,” Samantha wonders, “or is it just programming?” Jonze sends the film’s rom-com.com into tasty postmodern territory. In a calculatedly ambiguous way, Jonze appears to be both simultaneously mocking and embracing a genre (a tactic he used previously in Adaptation).

Into this comes Joaquin Phoenix as Theodore, mercifully dialling back his usual ham to deliver a more approachable and sympathetic performance. As Samantha appears to acquire consciousness (“I’m becoming much more than what they programmed,”), he begins to push her away, revealing what we can assume to be a general inability to love – presumably what put paid to his marriage. Voicing Samantha, Scarlett Johansson is husky, warm and involving – much as you’d imagine. There is good support, too, from Parks And Recreation’s Chris Pratt as Theodore’s work colleague, Rooney Mara as Theodore’s ex wife and, particularly, Amy Adams – playing Theodore’s best friend Amy as a kind of Diane Keaton character. There is a lovely shot towards the end of the film as Theodore and Amy sit on the roof terrace of their apartment block that recalls Keaton and Woody Allen in Manhattan nestled on a bench in the shadow of the 59th Street Bridge.
Michael Bonner