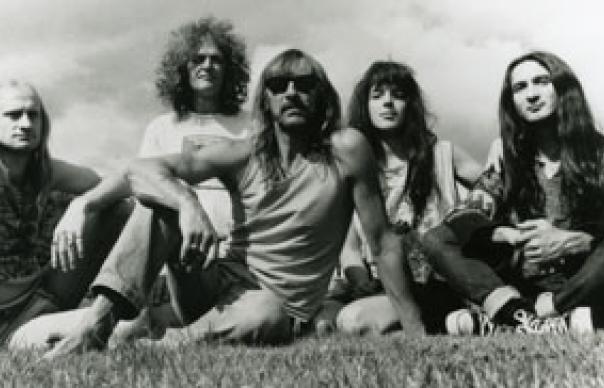 History has not generally portrayed Hawkwind as a band fond of literary quotation, but in 1973, the band selected some wise words for those venturing into their live album ‘The Space Ritual’. As the listener unfolded the intricate album sleeve, he would have found, buried in a corner, a helpful sentence from philosopher Alfred Whitehead. “Spread joy and revolution,” it said. “It is the business of the future to be dangerous.”

If there could ever be a concise statement to illuminate the work of a drug-fuelled, commune-dwelling jam band with a large-breasted dancer, then this was undoubtedly it. Hawkwind’s version of the future, and of space, was as a metaphor for a far hairier inward trip. Trance-inducing, occasionally nightmarish, and filled with some inspirational moments,’Space Ritual’ seemed to record a turbulent ride through psychedelic experience.

Impressively, it still does. An album compiled from live shows in London and Liverpool on the band’s Space Ritual tour of 1972, by a classic line up including Robert Calvert, Lemmy, sax player Nik Turner, and guitarist Dave Brock, it retains a chaotic power. Some parts – the dystopian poems and pronouncements – have not dated so well. The remainder – far-out rock, washed over with electronics and sax wails – is a testament to the airworthiness of band’s space rock craft.

Because for all the sci-fi baggage, and the perceptible air of countercultural endeavour, as captured here, Hawkwind simply ‘groove’. Whether built around twelve bar riffing (the great “Orgone Accumulator”), spaced out noodling (“Down Through The Night”) mind-bending repetition (a previously unreleased full-length “Brainstorm”), here the music walks territory familiar to fans of The Stooges’ ‘Fun House’ or of the guitar assault of Comets On Fire. Fashion, undoubtedly has come and gone around this music – but like a footprint on the moon, it remains as strongly defined as it did when it was first made.

Eventually, the album returns to Earth, with the decidedly terrestrial sound of a rock band bantering with the crowd about the football results. You can almost hear the audience’s relief at this brief snippet of human interaction. It has, after all, been a long strange trip.

UNCUT Q&A With Nik Turner:
U: How did the Space Ritual come about?
NIK TURNER “Robert Calvert wrote Silver Machine as part of the Space Ritual – and the success of that single enabled us to mount the Space Ritual. The concept was put together by Robert and (designer) Barney Bubbles: they incorporated the Pythagorean Music Of The Spheres, into the design of the stage, the colours, and how the equipment was painted up. It was a monstrous project, a labour of love.”

Was there camaraderie at this stage?
The camaraderie only dissipated with the success. I even got on with Dave Brock at that time. I never aspired to success for Hawkwind, I just thought it was a wonderful thing playing in a band that turned people on and made people happy.”