The latest domestic unravelling from the Austrian master 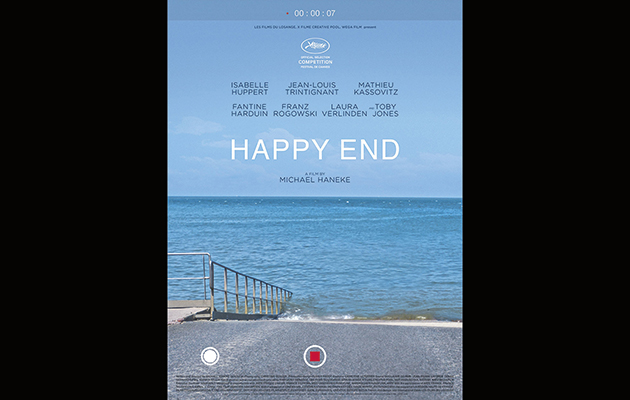 Followers of Michael Haneke will be delighted to learn that Happy End opens with mobile phone footage, taken secretly, of a woman as she goes about her nighttime ablutions. The sequence feels like a contemporary update on Haneke’s 2005 film Caché, about a Parisian family who receive videotapes of the outside of their house.

We learn that this phone footage was shot by Eve (Fantine Harduin), shortly before she is shipped off to stay with her father Thomas (Matthieu Kassovitz) and his family on their splendid estate in Calais.

The Laurents are a classic Haneke clan. 84 year-old patriarch, Georges (Jean-Louis Trintignant), is an advocate of euthanasia; Eve’s aunt Anne (Isabelle Huppert) is struggling to control both the family construction business and also her erratic son Pierre (Franz Rogowski). Admirers of Haneke’s devastating Amour will note the reteaming of Trintignant and Huppert. And into this nest of family grievances, revenge, guilt and repression, it is a pleasure to welcome Toby Jones – a man clearly born for Haneke films, who plays Anne’s fiancé, a British lawyer handling a deal for the family’s company.

Happy End – the title is ironic, like Funny Games – plays like a Haneke Greatest Hits set, full of misery and creeping dread. Early on, we see part of a wall collapse on a building site belonging to the Laurent’s firm. It is an ill-omen, of course, which provides some kind of narrative motor for the film; though essentially Haneke is more interested in the sociopathic behaviour of almost all the characters here. In that respect, Georges and Eve become the film’s most interesting characters – their transgressions are the most severe. One scene late on in the film, where they swap secrets, manages to be both terrifying and weirdly moving.