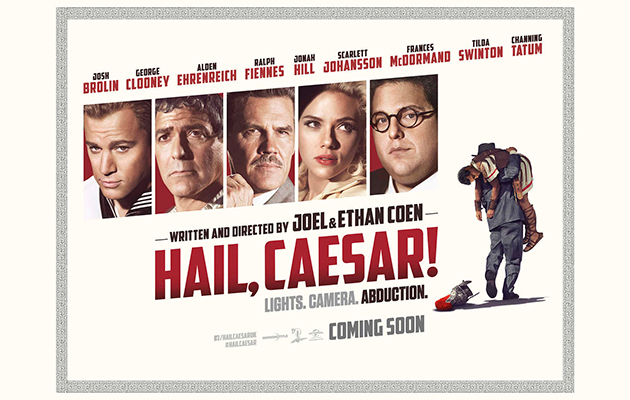 In 1991’s Barton Fink, the Coen brothers put a lowly Hollywood screenwriter through the ringer. The Coens revisit Barton Fink’s fictional studio Capitol Pictures in their new film, Hail, Caesar! Although the action takes place in 1951 – a decade later than Barton Fink – Joel and Ethan are still intent on making life miserable for their latest protagonist: Eddie Mannix (Josh Brolin), the studio’s “head of physical production” who endures a litany of woes including a kidnapping, a pregnant leading lady, catty gossip columnists and the capricious decisions handed down by his unseen superior.

For their last few films, the Coens appear to have drawn inspiration from their own formative experiences. 2009’s A Serious Man outlined a midlife crisis in the American Midwest in the 1960s, which happens to be where and when the Coens themselves were raised. Meanwhile, 2013’s Inside Llewyn Davis was a portrait of a New York folk singer whose career was entwined with another Bob Dylan; another son of the Coens’ home state, Minnesota.

The 1950s setting for Hail, Caesar! coincides with the Coens own early cinema trips. You suspect that growing up they would have seen films like the ones represented here: the musical top-lined by song-and-dance man Burt Gurney (Channing Tatum), the tight-lipped period drama directed by Laurence Laurentz (Ralph Fiennes) or the folksy Western starring downhome rodeo star Hobie Doyle (Alden Ehrenreich).

In that respect, Hail, Caesar! feels as much like a warm tribute to the studio pictures of the Coens’ youth as it does an exuberant comedy in its own right. Mannix principal concern is finding the whereabouts of Baird Whitlock (George Clooney), the studio’s biggest star who has gone missing from the set of Hail, Caesar (subtitle: A Tale Of The Christ), a sword-and-sandals epic loosely modeled on Ben Hur. He suspects foul play, which leads him to a group of Communist writers (“We’re for the little guy”), a nod to Dalton Trumbo’s political activities during the same period. The films within films are expertly done – who knew Channing Tatum could do tap? – and the Coens’ impressively juggle an ensemble cast that also includes Scarlett Johansson, Frances McDormand, Tilda Swinton and Michael Gambon.