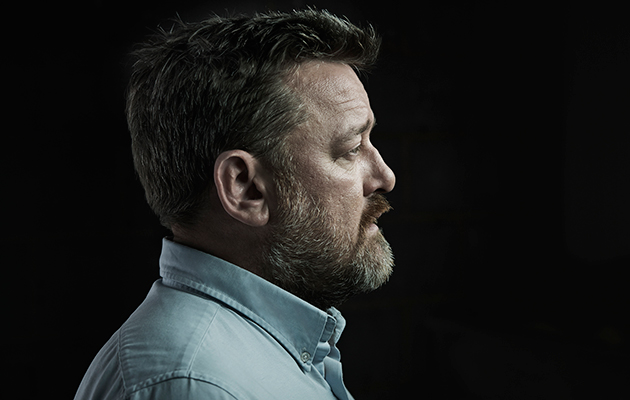 It’s a quarter of a century since five friends from Bury formed a band called Elbow. Since then – and unusually for a group with such longevity – there have been no bust-ups or walkouts, no discernible aggro beyond, possibly, who should get the next round in. Instead they have presented an unbesmirched picture of northern grafters whose slow path to glory has been navigated with grace and equanimity.

At the centre of it all is Guy Garvey, a lugubrious yet sweetly affable frontman who hardly passes for a pop star but has nevertheless risen to become something of a national treasure. A contributing factor is his BBC 6 Music radio show where his love for his job seeps from the speakers, and during which he touchingly introduces himself as “Guy Garvey, the lead singer from Elbow”, just in case any listeners are still struggling to place him.

It’s with similar self-deprecation that he has described his first solo effort as “a vanity project”, a self-conscious nod to the many ego-fluffing excursions of frontmen past. Courting The Squall is, he says, the result of a long-held desire to temporarily shake off the constraints (and conflicting opinions) of a five-piece band. It’s an experiment to see how he fares on his own.

That is not to say that Garvey has fallen out of love with Elbow, or that he has temporarily lost his mind and indulged a lifelong yearning to make an album of Tuvan throat singing. This solo work is still recognisably his, yet it is leaner, more intimate and a little rough around the edges.

While his way with a melody is as keen as ever, this isn’t about the rousing tunes or ticker tape moments. There are no massed voices or orchestras for added emotional sway. If Garvey has an audience in mind, it’s not the vast crowds to which he has become accustomed but small gatherings in backrooms and basement dives. Where he exhorted us to “throw those curtains wide” in Elbow’s masterpiece “One Day Like This”, here he seems to be inviting us to draw them shut, pull up a chair and pour ourselves a glass of wine.

It’s no surprise to discover that the album was recorded swiftly and with minimal overdubs; the whole project has a deliberately unstudied and, at times, semi-improvised atmosphere. Illustrative of the looser vibe is the opener “Angela’s Eyes”, apparently informed by his burgeoning interest in Afrobeat. It begins with shuffling drums and twanging, atonal stabs of guitar over which Garvey reflects, in unvarnished voice, on his attempts at self-examination (“I’ve been looking for my truth since God was a boy”).

Indeed, there’s an eclecticism here that you’d struggle to find on an Elbow record. “Electricity” is a smoky, sensuous homage to ’30s New York jazz, with guest vocals from Jolie Holland. Here you sense a man joyfully dabbling in alternative eras and genres without ever straying from the sweet melancholia at which he has become so adept.

On “Juggernaut”, Garvey slips back into older, more familiar territory, homing into on the humdrum (“cursed in the folly of a three-dollar brolly”) while dispensing bruised wisdoms. There’s an Elbow-esque quality, too, in the piano arrangement of “Yesterday” which has shades of a John Barry film soundtrack, and which suffuses the song with a melodrama that is mostly absent elsewhere.

Lyrically, as ever, Garvey’s skill lies in combining romantic poeticism with sandpaper wit. In the title track, against gentle washes of harp, he bemoans the distance, both physically and emotionally, from a partner: “You’re out with a friend in the capital, I’m a thousand leagues under the sea/You’re hovering worriedly over your eggs and I’m pondering trees.”

This sense of a man out of step with the world is, of course, a recurring theme for Garvey. Going solo may be a new dawn for a singer looking to try something new but, in his case, there’s no getting away from himself.

Q&A
How scary was it to be making an album without the security blanket of a band?
The lads’ opinions were always in my mind but there are many areas where Elbow’s tastes don’t meet. So it was exciting to try new things and in the end I didn’t consider the record finished until they had all heard it and loved it. Five songwriters working together means each decision is pored over, which is what makes Elbow’s music so intricate, often challenging and ultimately very grand. This record was made quickly and impulsively and it feels a bit more from the hip as a result. Vanity project is precisely the right phrase.

Could you throw some light on the album’s title?
In the context of the song it is taken from, it’s a gentle way of telling a friend that their reckless social pursuits are bordering on self-harm. It means prodding the bear, gently inviting danger. As an album title, going solo was pretty nerve-racking. Elbow’s music has always been very well received and I didn’t know if I was capable of a making a good album on my own.

To what extent were you trying to make a record that didn’t sound like an Elbow record?
One of the first compliments I had on the record was from Tim Young who mastered it. He has mastered Elbow records for years, so he is a reliable benchmark. He said ‘I like this album Guy, it doesn’t sound like Elbow but not self-consciously so.’ That’s exactly the tightrope I was trying to walk.
INTERVIEW: FIONA STURGES