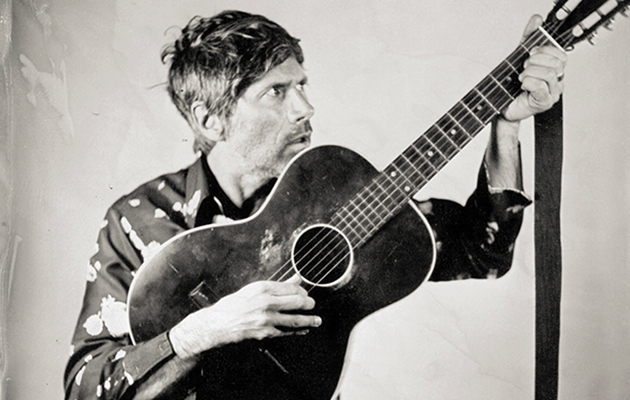 If you haven’t heard the one about the disgraced car designer, chances are you haven’t heard the ones about the leftist Italian publisher or the explorer seeking the lost Welsh tribe in Patagonia either. Super Furry Animals tended towards the giddily obtuse in their pomp – Paul McCartney notably played “celery and carrot” on 2001’s Rings Around The World. However, frontman Gruff Rhys has headed further into conceptual space since – solo and with his Neon Neon side-project. His music has consistently fizzed with ideas, but the 47-year-old’s desire to explore everything through the prism of something else has been wearing for the unconverted. Eyes may glaze over again at the news that his fifth solo album proper combines millennial angst, a sour assessment of Mel Gibson’s Hamlet and a gigantic orchestra. Reassuringly, though, Babelsberg is neither as big nor as clever as it seems.

Recorded in a one-day session in 2016 a week before producer Ali Chant’s Bristol studio, Toybox, closed down to make way for a new residential development, Babelsberg’s basic tracks went into cold storage for the best part of 18 months while Rhys pondered what to do with them. Eventually, he decided to let composer Stephen McNeff and the National Orchestra of Wales place a wide-screen backdrop behind his unusually small-scale songs of disillusion. In the interim, the world turned upside down. Britain voted for Brexit, the United States voted for Trump, but Babelsberg – its name lifted from a road sign Rhys spotted on tour – lost none of its fizz in the can, and sounds like a record of its moment: absurd, bewildered, and somewhere beyond a joke.

“I’m just a monument to times gone wrong,” Rhys sings on Lee Hazlewood-fired opener “Frontier Man”, Babelsberg’s journey to the “frontier of delusion” documenting the singer’s advancing years as well as the decline of Western civilisation, the life of the psychedelic troubadour seemingly losing a good deal of its John Wayne swagger beyond the badlands of 40.

The Philly Soul-psychosis of “The Club” maps out the raw humiliation of the fading cool-cat, past his prime and thrown out of “the club I built with my own two hands”, and a similar sense of incipient obsolescence underscores Rhys’ modern-life-is-rubbish assertions elsewhere. There is sympathy for the overheated freelancers in their coffee-shop offices on the Kinks-at-78 mania “Oh Dear!”, while “Take That Call” – a Kevin Ayers approximation of “She’s Leaving Home” – bemoans a touch-screen world scrolling way too fast.

So far, so Grumpy Old Men, but Rhys’s imaginings are more profound at their wildest. The Carpenters-smooth “Limited Edition Heart” sees something more monstrous hiding behind the façade of late capitalism (“I’m keeping my eyes peeled for military takeover at night,” Rhys sings, only half joking), while the sleepy “Drones In The City” recasts symbols of oppression as reassuring background hum, the dreary devil you know.

Babelsberg’s anxiety peaks on the Robert Wyatt-flavoured “Architecture Of Amnesia”, Rhys’ postcard from a fascist future. “And they built a wall, switched on searchlights on the brim, and invented a pariah at which everyone was shouting,” Rhys keens, aping the up-all-night stary-eyes of Pulp’s This Is Hardcore. The stuff of fever delirium in 2016; standard morning headlines two years on.

Such desperate days might seem to demand more radical noise, but Rhys’ limitations suit him here, even though “Same Old Song” bridles at the mundanity of his craft (Rhys tells Uncut he sometimes feels he “should be making ground-breaking abstract electronic music”). Humbler truths have their place, though: “Sing a song of love gone wrong,” he shrugs. “And the accolades unzip their shackles.” The lovin’ bucketful of “Negative Vibes” may well be Babelsberg’s most compelling piece in that regard, Rhys stretching touchingly for the top of his range as seeks a truce with the forces of reaction.

Closer “Selfies In The Sunset” is lovelier still. A sweet’n’sour duet with model-turned-polymath Lily Cole, it envisions the absurdity of the doomed millions taking one last cameraphone snap at the moment of the apocalypse (“count to three and pout your lips, hit the flash with your fingertips”), but finds a profound beauty as the earth dies beaming. “The backdrop’s blazing red,” purrs Rhys. “And everyone is equal in the valley of the dead.”

Babelsberg, meanwhile, is Rhys’ great leveller, perhaps the first record of his career that doesn’t demand a quadrophonic sound system, a slide show, a detailed explanation or a knowing wink. It’s warm and weird, but suddenly no stranger than the world around it. In surreal times, he finally makes sense.

Q&A
Gruff Rhys
This is a record of quite intimate songs with a huge orchestral backing: can you explain?
My last three records have been biographical records about other people whereas this album is songs about what’s going on in my daily life. I am a fan of a lot of orchestral pop records and it was an experiment for me – I’ve never used a fully symphony orchestra before. There are records where I think it works well: a lot of the Serge Gainsbourg records, Lee Hazlewood productions, even Curtis Mayfield records.

Babelsberg is bleak at times; do you despair of the modern world?
It’s not necessarily critical. It was recorded at a particularly worrying time for everyone, I think – a time of political uncertainty and paranoia. “Selfies In The Sunset” is that idea of taking photos at the time of the apocalypse – they’d probably look quite beautiful with the orange skies – so I think there’s some space left for hope there. Would there be a good song to play just before the apocalypse? Maybe something pathetic like “The Final Countdown” by Europe – maybe you could make a big deal of it with a countdown and some firework displays.

You have three wishes to fix the world: what do you do?
Right now, number one would be waking up – we should all wake up, fully. Number two, have a coffee, then number three, sort everything out.
INTERVIEW: JIM WIRTH