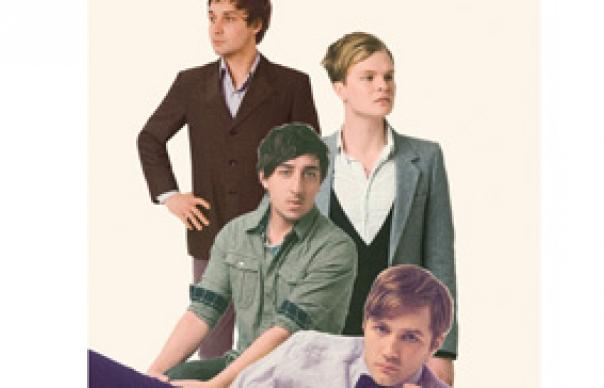 One day in 2006, a fat package arrived at my door, from the techno label Warp. Ten CDs: a whole lotta techno. Ever listened to nine techno albums consecutively? “This has been a character-building afternoon,” I thought, slipping the tenth CD (Yellow House by someone called Grizzly Bear) into the machine. Then, amazingly, out poured flutes, banjos, church-y pianos from Little House On The Prairie, haiku-like lyrics about rooms with frozen pipes, and heavenly vocal harmonies. The ghosts of Smile and Music From Big Pink wandered close at hand. This was a masterpiece.

Warp’s anomaly turned out to be a precociously talented Brooklyn four-piece, whose mysterious folk-pop-chorale hybrids can sometimes sound like they’re reconfiguring 150 years of Americana at the drop of a hat. With three ex-music students in the lineup, Grizzly Bear are both versatile and punctilious. Bassist Chris Taylor, for example, plays a lot of woodwind and keyboard instruments, while drummer Chris Bear has the precise technique of a trained percussionist. Grizzly Bear’s admirers – a growing army – include Radiohead (with whom they’ve toured), Paul Simon [see Q&A] and Fleet Foxes’ Robin Pecknold, who has already called Veckatimest the album of the decade.

A 12-song set lasting 53 minutes, Veckatimest has a different atmosphere to Yellow House. Grizzly Bear have made a big virtue of its dynamic range –the fourth track, “Fine For Now”, climaxes in a violent ensemble shit-storm, which would never have happened on Yellow House – and they’ve spoken of its increased sonic clarity. True, we hear not only the words and instruments, but even the click of Daniel Rossen’s tongue on the roof of his mouth as he sings the word “gone”. Yellow House felt like it took place entirely indoors. It was hushed, dusty and you could imagine creaking floorboards. Veckatimest is an outdoor record. Part of it was made on Cape Cod (a peninsula linked by bridges to mainland Massachusetts), and the album is within sight of blue water from the moment Rossen sings its opening line (“A haven on the southern point is calling us”) over a gently rolling groove. The song flickers with subliminal images.

With a tiny glint of a Cornish accent, Rossen delivers one line (“Avert yer eyes from all o’ this”) that had me seeing visions of Robert Louis Stevenson’s Hispaniola. Veckatimest – named after one of the Elizabethan Islands off Cape Cod – is ambitious, elegant and an absolute bugger to describe. As on Yellow House, Grizzly Bear juxtapose forms as wide apart as post-rock, doo-wop, Philip Glass and The Threepenny Opera, to say nothing of the thrilling Beach Boys references that got some of us so excited in 2006.

But what’s becoming clearer, particularly since Rossen’s second band, Department Of Eagles, released a fine album (In Ear Park) last year, is the distinction between the Grizzly Bear tunes that he sings, and the ones sung by his fellow lead vocalist, Ed Droste. A Rossen song (“Dory”, “Hold Still”, “I Live With You”) will often feature unusual guitar chords and have a dreamy, Disney-esque quality, accentuated by the sweet, Van Dyke Parks lilt in Rossen’s voice. Droste, for his part, is a remarkable combination of blue-eyed soul, 10cc and Benjamin Britten. Droste’s tunes (“Two Weeks”, “Cheerleader”, “About Face”) can sound facile in their early stages, a bit too simple, but when their sumptuous arrangements kick in, the melodies quickly attain grandeur and become lethally infectious.

Rossen is a pure original, but it’s the Droste songs that you may find yourself humming around the house.Hints of Radiohead are also discernible here and there, which may be unintentional. As things stand, ovations from Radiohead and Fleet Foxes look sure to propel Grizzly Bear to wider renown. While I’m not sure Veckatimest is the huge improvement on Yellow House that some blogs claim it to be, it’s unquestionably a lovely record and it deserves to be heard on land, sea, indoors and out.


UNCUT Q&A: Ed Droste
Fleet Foxes have praised Veckatimest to the skies. Are you friends? Is there a shared purpose?

I wouldn’t say a shared purpose, but I greatly respect them. I’ve never met Robin [Pecknold], but we talk all the time via email or Twitter. He lives in Seattle and I’m in New York, so we haven’t crossed paths yet. I’m sure I’ll meet him this year at some festival.

Grizzly Bear are often compared to Van Dyke Parks. Do you play his music much?

I didn’t grow up listening to him as much as my band-mates, but I went to college with his daughter and she became one of my best friends. Ironically enough, I’m sitting in her house in California right now, so it’s funny you should bring up his name…

You performed at Paul Simon’s concerts in Brooklyn last year. How did that happen?

A total fluke, actually. He met our friend Feist at a taping of Saturday Night Live, and said he needed bands who could perform his music. She mentioned that Grizzly Bear cover “Graceland”. He was like, “Great, when are they playing?” She said: “In about 90 minutes, about four blocks away.” Next thing you know, he’s sitting backstage with us.