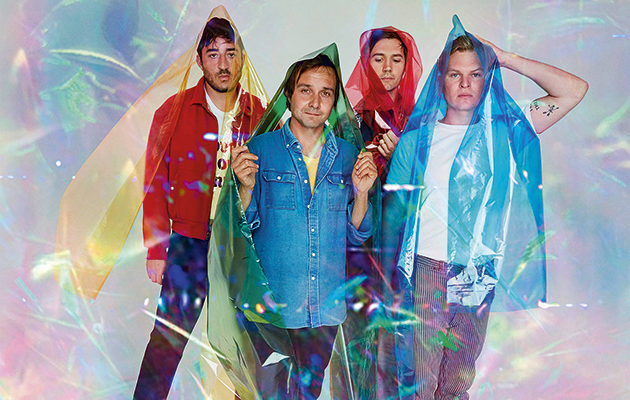 IF recent history has taught us nothing else, it’s that democracy is messy business. Despite its high-minded ideals of representation and accountability, it can be slow and cumbersome, inhibiting good ideas while letting unfortunate ones occasionally slip through. Even its vaunted robustness can be undercut by a few bad actors, as we’re reminded almost hourly of late.

Perhaps we shouldn’t be surprised about those political realities, given the poor performance of democracy in the microcosm of music. In the band structure, totalitarianism oftren rules, with groups organised around an undisputed leader typically showing the greatest longevity. Egalitarianism, on the other hand, can be band poison, as attested by the tombstones of many acts whose secondary songwriter sought greater authority.

Grizzly Bear stand as the exception to this rule, a band that, despite all odds, have only grown more democratic over their existence. From their genesis as Edward Droste’s solo project, the group has gradually decentralised, adding a second singer and songwriter in Daniel Rossen, the multi-instrumentalist and in-house producer Chris Taylor, and the assertive drumming of Christopher Bear.

Since 2006’s Yellow House, every Grizzly Bear track has credited all four members as songwriters. The lines between “Ed songs” and “Dan songs” gradually blurred as they increasingly traded lead vocals within songs, while collective harmonies became their most distinctive voice. Even their onstage set-up reflects this equal footing, with all four primary members organised in a line at the front of the stage.

But that remarkable commitment to democracy comes with its disadvantages, too. It’s been five years – an eternity in internet time – since the group’s last record, 2012’s Shields. Like many groups of friends in their thirties, they’ve drifted apart geographically, spreading out across both US coasts. And a healthy amount of individual side projects – solo records, television scoring, production work – have conspired to keep Grizzly Bear on the backburner.

As a result, there was a lack of urgency in producing what would become Painted Ruins. For months, the foursome shared scraps of music online, paired off on songwriting excursions, and forbade the use of the word “album”, keeping the pressure as low as possible. Even the recording process was bi-coastal, with separate sessions in Hollywood and the rural New York studio where they recorded 2009’s Veckatimest.

Given its fragmented creation story, the cohesiveness of Painted Ruins is a wonder. Expertly blending the band’s four strong perspectives and patiently expanding on their previous work, it’s a confident effort that belies its halting construction. As Rossen sings on “Four Cypresses”, the band’s process is “chaos, but it works”.

Consider the many moving parts of “Losing All Sense”, which moves from itchy post-punk to dreamier environs (complete with harp) to an electro fantasia, relays lead vocals from Droste to Rossen for a haunting bridge, then circles back to its wind-up-toy beginning. If it develops like four songs in one, that’s because it probably is – but woven together so skilfully you can’t see the sutures.

Other songs fluidly move through several sections without ever feeling cumbersome. “Cut-Out” journeys from a sparkling Droste verse (with a great opening line for a love song – “You are like an invading spore”) to a loud Rossen section over reverbed guitar fireworks. “Three Rings” keeps a steady rhythmic floor but progressively applies multiple vocal and instrumental ideas on top, from Droste’s gentle croon and the band’s airtight harmonising to stretches of woodwind buzzes and sing-song arpeggios.

Throughout, Painted Ruins is sonically brighter compared with their occasionally drowsy back catalogue. Opener “Wasted Acres” is probably the first Grizzly Bear track you could convincingly rap over, with a loping drum loop, strings in full glissando and lyrics about a four-wheeler off-road vehicle. “Losing All Sense” shares DNA with their former Brooklyn neighbours Yeasayer, a syncopated groove gilded with electronic interludes. Even “Glass Hillside”, which head fakes as a folky dirge for its first minute, mood-shifts to a bouncy electric piano part that dominates the rest of the track.

While not fully triggering the narrative of the “post-guitar” record, songs such as “Mourning Sound” do a lot of work without the instrument, deploying it only for the occasional acoustic texture or brief lead melody. Where Rossen and Droste’s guitar interplay does appear, it’s just as strong as their vocal blend, as on the chugging acoustic choruses of “Neighbors”.

The other half of Grizzly Bear also hold their own. Taylor’s production talents, responsible for defining much of Grizzly Bear’s hazy, calmly psychedelic sound, continue to mature, placing subtle horn or string drones in the corners to unsettle songs such as “Sky Took Hold” and “Four Cypresses”, while keeping arrangements deeply layered without spilling into clutter. Painted Ruins also includes Taylor’s first turn on lead vocals, the ethereal “Systole”, a producer’s producer track loaded with studio shimmer and crystalline fingerpicking.

Meanwhile, Bear’s drums are frequently staged as a lead instrument, whether embellishing around simple loops throughout “Three Rings” or “Losing All Sense” or leading the charge through the proggy snags of “Aquarian”. Often, his percussion skitters anxiously with sporadic 16th notes, in the style of Phil Selway’s most paranoiac patterns, knocking any pastoral vibes off-centre in disquieting fashion. In fact, it’s tempting to draw deeper thematic parallels with Radiohead, who enlisted Grizzly Bear as opening act in 2008. Though the lyrics here are as opaque as ever, repeated themes of distressing sounds, great disasters and environmental decay butt up against the tranquil imagery of songs conceived in Big Sur and rural upstate New York. As a band known for its sedate moods and crystal harmonies, the slow-build panic attack in the middle third of “Four Cypresses” creates an ambush of contrast with its suddenly sharpened intensity.

Indeed, if Painted Ruins fits the current political mood, it’s as an album of songs beautiful on the surface, but with darkness nibbling on all sides; hope and despair on an endless see-saw. It’s also a record of thirtysomething friends, estranged by both geography and navigating the adult territory of marriage, divorce and parenthood, fighting through frustration and separation to find the common ground that once and still exists. It’s political and personal – democracy functioning at its messiest yet most idealistic, buttressed by the simple but ever-elusive act of listening and trusting each other.