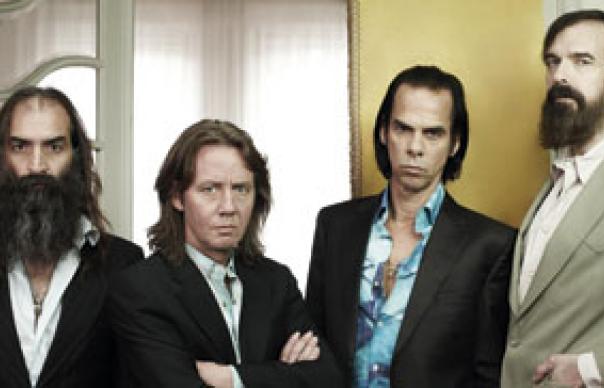 The original Grinderman manifesto was simple but savage: “No God, no love, no piano”. For these four inveterate Bad Seeds, whose lifeblood for the past 15 years and more has been piano-led songs about ’im upstairs and ’er indoors, Grinderman has been a brutal exercise in deprogramming.

Not many rock stars approaching their 50th birthday would be prepared to kick away all their usual songwriting crutches and risk their reputation on a brand new venture, especially one involving the deconstruction of their own masculinity to a squall of semi-improvised garage rock noise. Luckily, Nick Cave was game for a laugh.

He mothballed his piano and picked up the electric guitar for the first time in his life. Warren Ellis followed suit, setting aside his violin in favour of a toybox full of effects, while the rhythm section of Martyn Casey and Jim Sclavunos devolved their style of playing to such an extent that they may have well been hitting their instruments with rocks and bones. And the great Grinderman gamble paid off: now the second album by this schismatic sect is as hotly anticipated as any Cave release in recent memory.

Nobody who’s seen Grinderman live, with their synchronised facial foliage and we-mean-business suits, Cave attacking the unfamiliar instrument around his neck as if he’s trying to strangle a poisonous snake, has been left in any doubt as to what distinguishes them from The Bad Seeds. Their challenge here has been to maintain that distinction, now that Grinderman has “infected” The Bad Seeds, its abstract sonics and twisted sense of rock’n’roll fun smeared all over 2008 Bad Seeds album Dig Lazarus Dig!!!

They’re also well aware that you can only hit a man in the face once before he starts ducking your punches, so Grinderman 2 opts for the rack over the electric chair, easing off the tempo, eking out the tension, prolonging the pain. Guitars are fed backwards, sideways, shredded and skewered until they sound less like guitars and more like rutting foxes at a motorbike rally.

The blues remain a touchstone – the album’s first line is “Woke up this morning” – but Grinderman 2 prefers to prowl rock’s perimeter with Amon Düül II, Suicide and contemporary drone practitioners like Wooden Shjips. “Mickey Mouse And The Goodbye Man” repeats a glowering two-note bassline for five-and-a-half minutes, allowing Cave to ad-lib a perverted fairytale, complete with “bat-faced girls” and werewolf howls. “Worm Tamer” is a swirling cesspool of noise over which Cave reveals, magnificently, that, “My baby calls me the Loch Ness Monster – two great big humps and then I’m gone”.

Cave’s protagonists – gruesome, lecherous, desperate – stalk these songs like Wild At Heart’s Bobby Peru prowling his trailer park. “I’ll stick my fingers in your biscuit jar,” he leers on “Kitchenette”, again displaying his talent for transforming the mundane into the malevolent. “Palaces Of Montezuma” is comparatively breezy, a whiff of “Sympathy For The Devil”, until Cave goes too far when trying to woo his reluctant quarry with ever-more exotic gifts: “The spinal column of JFK/ Wrapped in Marilyn Monroe’s negligee/I give to you.” Hope he’s kept the receipt.

“When My Baby Comes” is unleavened by such near-the-knuckle humour, largely because it appears to be sung from the perspective of a gang-rape victim. Instead it sambas grimly towards a terrible, ear-splitting climax before staggering around as if shot, and eventually collapsing in a bloody heap. Yet as with “Man In The Moon” on the first Grinderman album, it’s actually the quietest track here that’s the most radical, compared to Cave’s usual schtick. “What I Know” consists of little more than a lightly-tapped acoustic guitar, some tropical static and distant whoo-hoos, as Cave croons glumly, devoid of his usual theatrics, “I know a million things are going to happen to me / In rooms that are much like these/ It’ll never be enough.” It’s the kind of elegantly defeated admission you expect to hear tumble from the mouth of Marks Eitzel or Kozelek, which makes it all the more stunning coming from Cave.

Grinderman 2 is not without its faults: “Heathen Child” is basically just “No Pussy Blues” without the punchline, “Evil”’s blanket of noise hides a stillborn half-song, and “Bellringer Blues” is the kind of Cave-by-numbers trudge he’s been closing albums with for years. You sincerely hope, however, that this gang of ageing delinquents allow themselves to keep devolving in tandem with The Bad Seeds for a good while yet.
Sam Richards