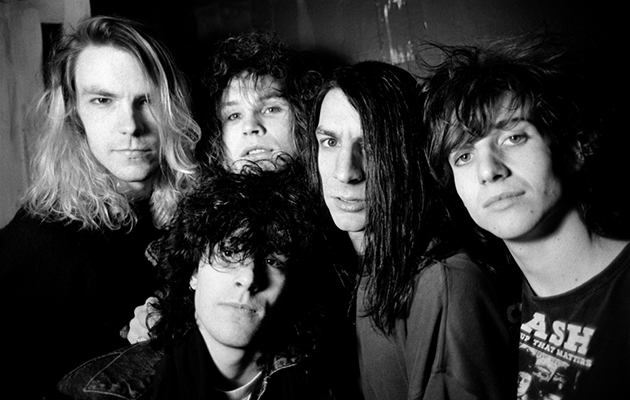 Formed in 1984 and defunct by 1987, Seattle’s Green River didn’t enjoy an auspicious career. They released two EPs of sludgy punk-metal during their time together, both of which were delayed by their labels, and their only U.S. tour was launched with no record in hand and no fans in clubs. Another delay meant their first full-length album was released six months after the musicians had gone their separate ways.

Despite such indignities, Green River have had a remarkable afterlife, proving massively influential within the Seattle rock scene. Following their break-up, its members went on to co-found Mudhoney, Love Battery, Mother Love Bone, and later Pearl Jam. More crucially, Green River’s small catalogue — in particular 1986’s Dry As A Bone and 1988’s posthumous Rehab Doll, both of which are being reissued with generous bonus material by Sub Pop — established what became known as the Seattle sound, a rambunctious collision of metal aggression, punk insouciance, classic rock riffing, and industrial-grade sludge. In these two releases lay the foundation of every subsequent Washington State band, for better or for worse, from Nirvana to Alice in Chains to such suspect latecomers as Candlebox.

Produced by Jack Endino (Soundgarden, Tad), Dry As A Bone is arguably Green River’s best and most unhinged album, certainly their rawest and possibly even their funniest. Frontman Mark Arm already exhibits a bizarre charisma, singing like he’s trying to out-Iggy the Stooges, and the band churn up a dank, dramatic sound that doesn’t sacrifice agile for heavy. “Unwind” opens as a grimy blooz-rock strut until the rhythm section turns it all inside out, quickening the pace and stretching the groove like taffy. It’s the most bracing moment in their small catalogue.

Sounding much more professional, Rehab Doll sharpens their blustery attack but burnishes some of Green River’s snottier eccentricities. An early and grimly humorous send-up of the city’s infamous heroin scene, the title track showcases the chops of new guitarist Stone Gossard, who introduces some of the swagger he would later bring to Pearl Jam. The highlight, however, might be their gnarly version of “Queen Bitch,” which shows the band could strut and sashay as confidently as they could lurch and lumber.

Perhaps even more than establishing the musical blueprint for grunge, Green River are noteworthy for embodying two very different, very oppositional attitudes that defined the Seattle scene of the late 1980s and beyond: keeping it real versus selling out. The tension between Arm’s DIY ethos and the more ambitious aims of Gossard and bassist Jeff Ament eventually tore the band apart, and that conflict would outlive grunge and define alt.rock for the next decade. As Arm howls on “PCC”: “What’s dead is now long forgotten / I never let it bother me.”