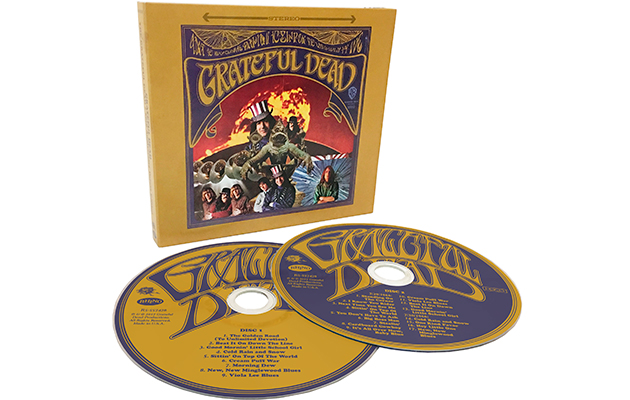 The late ’60s are littered with lost proto-punk classics, bands who accidentally bashed their way into time travel through a combination of blues simplicity and amateur talent. Since Lenny Kaye’s seminal Nuggets in 1972, excavating these unsung heroes of the garage has been a favourite pursuit of rock’n’roll paleontologists, fuelling many a compilation and deluxe reissue. But one of these early transitional species might just have been hiding in plain sight all these years, on Warner Brothers, under the nameplate of a band that ended up about as far from punk rock as possible.

The first of the Grateful Dead’s studio album reissue series – the extension of the band’s unending 50th anniversary self-commemoration – is possibly the most surprising of their discography. Here, what would become the flagship band of long, psychedelic improvisation sounds urgent, direct, pithy, and a variety of other adjectives you’d never use to describe their later career. Packaged with similarly-frenzied live material from the 1966 Vancouver Trips Festival, the reissue argues the case that the Dead initially had the fuzz-and-Farfisa sound that would still get them on the hippest garage-rock compilations today.

When the Grateful Dead entered the studio in January 1967, the psychedelic scene was still a blank slate, blindly feeling its way from the mind-cracking anomalies of the Acid Tests to a paisley worldwide wave. Before the Summer of Love codified the hippie aesthetic, there was a volatile mixture of concurrent countercultures, appropriately represented in the original Dead lineup by the biker bard Ron “Pigpen” McKernan, the folk-bluegrass licks of Jerry Garcia, the avant-garde classical-jazz of Phil Lesh, the maximum R’n’B clatter of Bill Kreutzmann, and the beat music brashness of Bob Weir. Throw these seemingly incompatible parts into a California blender of new sounds and new drugs, and what came out sounded – at least initially – a hell of a lot like punk rock.

With about a hundred shows’ experience by the time they got to the studio in 1967, the Dead were rapidly building their sterling live reputation. But as songwriters, they were still prepubescent, as reflected by their debut’s 7-to-2 ratio of covers to originals. While drawing mainly from prewar country blues and folk of the Harry Smith variety, the early Dead was hardly a throwback act, electrifying their roots and playing them at breakneck speed.

Of course, the drugs helped – though in the case of the self-titled LP, it wasn’t acid, but the more mundane Ritalin, taken by 3/5ths of the band to help complete recording in the four days allotted. The resultant high tempo might be the most jarring feature of the debut for seasoned Deadheads, with stately classics such as “Morning Dew” and “Cold Rain And Snow” played at double the bpm of later versions.

Nearly as disorienting might be the democracy of the early Dead. Pigpen’s early frontman status was more of a live thing than displayed here, where he only gets a single lead vocal (on a characteristically skeevy “Good Morning Little Schoolgirl”). But his generally unheralded organ stands toe-to-toe with Garcia’s lead guitar, swirling merrily through the serpentine middle-eight of “Cold Rain And Snow” and pumping the beat through Weir’s lead shouting turns “Beat It On Down The Line” and “New New Minglewood Blues”.

Despite the preponderance of covers, the two originals that made the debut are no slouches. “The Golden Road (To Unlimited Devotion)” probably sounded dated by the time the ’60s ended, but its ragged harmonies and carnival swirl were a more accurate depiction of early acid test euphoria than the genteel contemporaneous psychedelia of your Donovans and Byrds. “Cream Puff War” is the true lost gem, with jagged strums and a rope-a-dope rhythm that predict absolutely zero about the future of the Grateful Dead, but maybe a little about the fussier hybrid of post-punk.

The bonus 1966 show reveals a less successful songbook of early originals – “Cardboard Cowboy” and “You Don’t Have to Ask” were mercifully euthanized soon after – but just as much gusto. Played in a front of a less-than-enthusiastic crowd (“Our fame has preceded us,” Lesh comments after their introduction draws awkward silence), and upstaged by the light show, they nevertheless throw themselves into their set with abandon, stretching out “Cream Puff War” and tearing through early arrangements of “I Know You Rider” and “It’s All Over Now, Baby Blue”.

If you’re looking for true prophecy on the Dead to come, it’s found on both the album and live set in “Viola Lee Blues”, a lengthy update of a 1928 jugband 78. Even here though, the improvisatory vibe is much less interstellar exploration as hard-charging blues explosion, with a gradually building tempo manoeuvre honed over dozens of sweaty Fillmore nights that starts straining EQs by its last couple minutes. In a matter of months, they’d have a song called “Dark Star” that would launch them into a different orbit altogether, dramatically expanding the band’s sonic canvas and audience.

But given how those late-’60s jam epics became synonymous with psychedelic rock as we still know it today, it’s a thrill to hear the primordial ooze that preceded those more mature stages. Like any band or scene taking its first wobbly steps, it’s a hot mess in good ways and bad, an overflow of unrefined ideas that occasionally lap the abilities of the personnel on hand. That enthusiasm and ambition makes The Grateful Dead a historical document worth revisiting, even if it sometimes seems like a page from the wrong history book.

Q&A
BOB WEIR
What memory sticks out the most from the recording of the first album?
It was all new to me, so it all stuck out.

One striking element about the debut is how *fast* everything is played, which some biographers have attributed to Ritalin provided by the record company. Is there a better explanation? First-album nerves?
Most of the band was cranked up on Ritalin for just about the whole four-day process. I wasn’t, as I was on a macrobiotic diet at the time, so all the tempos seemed a *bit bright* to me.

The band was already starting to stretch songs live by the time you recorded the debut, how much of that did you want to capture in the studio? Was there record company pressure to keep songs shorter?
I think the prevailing wisdom was that we would try to keep the tunes at least kind of concise, as we didn’t want to put out something that no-one could relate to. It didn’t seem at the time like records were the best place to stretch out. These songs were just what we thought were our strongest tunes to offer on a record. We hadn’t gotten all that fully into writing yet; this was before we hooked up with Robert Hunter, for instance.

Do you remember anything notable about the Vancouver Trips Festival gigs included here?
I had taken LSD pretty much once a week, every week, for about a year at that point, and that was the last time for me. I thought it was getting to be time to try something new, so I got into the macrobiotic diet for a couple years. I also remember Michael McClure’s poetry reading, really powerful…
INTERVIEW: ROB MITCHUM