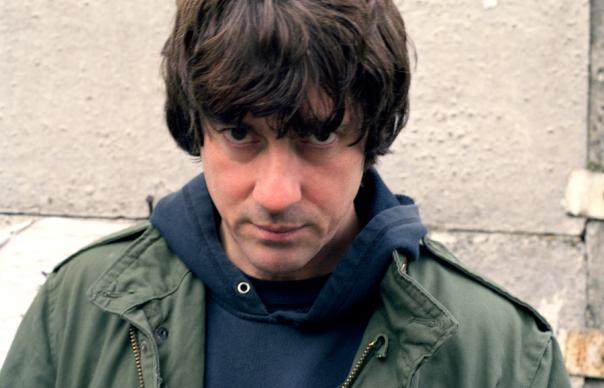 A series of heavy squalls rather than a settled spell of fair weather, Graham Coxon’s eighth solo album travels many miles from the serene, crafted almost-folk of his last release, 2009’s The Spinning Top. That record was a long, themed exercise in sustained mood and atmosphere featuring guests as venerable as Danny Thompson, Martin Carthy and Robyn Hitchcock. In contrast, A+E is short, loud and brattish. It’s also tremendous fun.

Driven by some of Coxon’s most innovative and uninhibited guitar playing, A+E’s trump card is its sheer sense of adventure. It’s not an album for lovers of the perfectly turned pop song so much as those who prefer to be bombarded by sonic extremes. The scratchy, angular pop of fizzing opener “Advice” sets the scene: melodic precision makes way for lopsided rhythm, abrasive textures, extemporised experimentation and vintage electronic equipment running riot. Much of the album takes delight in what can only be described as the sound of machinery arguing. The element of chance effectively becomes another instrument.

A+E is produced by Ben Hillier, who worked on Blur’s Think Tank and – perhaps more pertinently – Coxon’s second solo album The Golden D. Like that record, A+E is self-played, relatively lo-fi and rhythmically eccentric, making little attempt to ingratiate itself to the listener. The major difference between the two is that this time Coxon generally favours the influence of krautrock and post-punk from the late 70s and early 80s over alternative US rock from the same era.

He marries Magazine and Kraftwerk on the whiney space-pop of “What It’ll Take”, a delightfully artless throwback which smears arpeggiated sci-fi synth lines over a chugging motorik groove. Its jittery desire to “make you people dance” is a recurring theme. Much of A+E extends a hand from the dancefloor towards the kind of inhibited white kids who have to be wasted before shaking their stuff, a group to whom you strongly suspect Coxon once belonged.

But generally a spirit of slightly unhinged buoyancy prevails. The robotic “Meet + Drink + Pollinate” is both sinister and hilarious, as Coxon’s blank voice intones a perverse tale of a man “working undercover in his bedroom” over cheesy handclaps and random sounds colliding in a shower of sparks. All frantic riff and shriek, “Running For Your Life” is a tragi-comic portrayal of England’s north/south divide. Amid all the aggro and closing time violence we find not only the album’s title but also the promise that “we don’t like your accent or your Northampton shoes.” It’s funny, but not necessarily ha-ha.

Perhaps due to the after-effects of the Blur reunion, at times Coxon sounds more like Damon Albarn than ever before, particularly on the clattering, punkish “Bah Singer” and “Seven Naked Valleys”, which welds its corrupted Duane Eddy twang to boozy horns and a lovely galloping melody. It’s one of the few times where a tune really sticks. Another is “Ooh Yeh Yeh”, a slinky, Kinksy little thing which ends the album on an upbeat note. It feels apt, because ultimately A+E’s ramshackle joie de vivre is what lingers. Loud and lively, fast and fuzzy, this scattering of creative energy is the most persuasive solo record Coxon has released.
Graeme Thomson

Q&A
GRAHAM COXON
A+E could hardly be more different than your last record.
The Spinning Top was acoustic music and an ear-tingling experience but I’d had enough of that flavour. I put my guitar away and started playing around with bass and drum machines, thinking about rhythm and perverse sounds. The idea of songs didn’t really enter my mind, it was all about using and abusing technology. I listened to a funny song on The Golden D called “My Idea Of Hell” where we put drum machines through synthesisers. I thought these new ideas would go well with that sort of treatment. It’s my idea of groovy dance music.

Lyrically it feels less introspective…
I removed any temptation to be flowery, pretty or sentimental. This has a more sinister edge, but I was in a good place when we were recording. It was fun despite some of the bleakness. I hope it’s not depressing.

Is A+E the sound of you being wilfully awkward?
I like my ears to be entertained. I can’t be bored. I like prog rock but it goes on a bit, so I make 15 minute prog rock songs into compact pop songs. Pack all the good bits into three minutes!
INTERVIEW: GRAEME THOMSON