Pull up to her bumper! Disco diva’s 1981 new-wave masterpiece pimped out with b-sides and unreleased material... 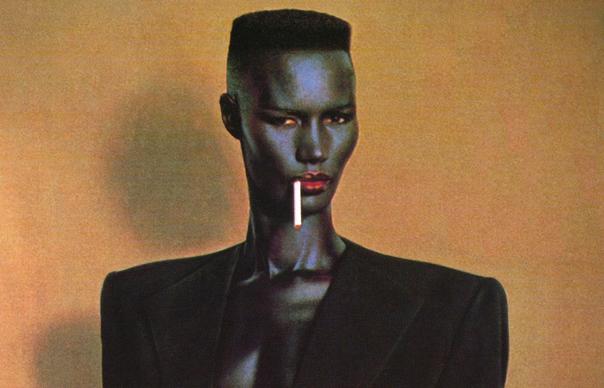 Pull up to her bumper! Disco diva’s 1981 new-wave masterpiece pimped out with b-sides and unreleased material…

Grace Jones had already been typecast as a supernatural being by the fashion world in the 1970s while she held court in the bohemian hotspots of New York and Paris. Still, it it took a leap of faith by Island Records’ Chris Blackwell and Alex Sadkin to launch the Jamaican diva as a radical new artist at the turn of the ’80s. Released in 1981, Nightclubbing is the album that came to define Jones as the complete performer, in her own way, as singer, muse, actress, alien and androgyne. Its sound, a sublime mix of reggae, funk, new wave and disco, was as arresting as its cover image, a painting of Jones by her partner Jean-Paul Goude, her sinuous masculinity accentuated by a flat top hairstyle and modern Armani tailoring. The indigo mood, cool gaze and cigarette suggested Marlene Dietrich, the gender-bending a touch of Bowie. No one had seen or heard anything quite like this, though.

She had form, of course, having made, in tandem with her modelling career, three decent disco albums with master mixer Tom Moulton, but by the end of the ’70s it was time to step off that treadmill. Sensing her potential, Blackwell invited Jones to his studio, Compass Point, near Nassau in the Bahamas, and assembled a band who, under his charismatic stewardship, would interpret contemporary hits and compose original material for Jones. Though A Certain Ratio had been considered for the gig, it quickly became apparent that Blackwell’s boys were no ordinary outfit. The backbone of countless dub and reggae grooves, bassist Sly Dunbar and drummer Robbie Shakespeare could claim to be the finest rhythm section in the world, while alongside guitarists Mikey Chung and Barry Reynolds (ex-Blodwyn Pig) and percussionist Uziah ‘Sticky’ Thompson, Parisian keyboard player Wally Badarou brought continental flair to the mix. Dubbed the Compass Point All Stars, they eased themselves into the task at hand with fairly orthodox covers of The Pretenders, Roxy Music and The Normal for 1980’s Warm Leatherette before hitting their stride on the edgier material that would form Nightclubbing.

Only 12 months separates the two albums – Jones’ altercation with chat show host Russell Harty, in December 1980, occurred midway between releases – yet they’re very different beasts. Perhaps the All Stars, by now a well-oiled unit, had sussed out what Blackwell and Sadkin were after because on Nightclubbing they’re cavalier enough to dismantle Flash And The Pan’s “Walking In The Rain” and Bill Withers’ “Use Me” and rebuild them in Jones’ image: exotic, sensual, funky and – uniquely for a woman who devoured the spotlight – somehow endlessly mysterious.

On “Nightclubbing” they construct a synth-funk chassis over which Jones decadently drapes her long limbs, transforming Iggy’s neurotic narrator into a champion athlete. “Demolition Man”, a song Sting wrote for Jones and later recorded with The Police, is gobbled up and spat out over a booming, rubbery groove. There are lighter moments that highlight the breadth of the producers’ tastes – the snaking, sultry “I’ve Seen That Face Before (Libertango)” and “I’ve Done It Again”, written by Reynolds and Marianne Faithfull, on which Jones sings rather than commands – but it’s the All Stars’ “Pull Up To The Bumper” that will always be the real head-turner. A raunchy post-punk dub underpinned by a classic Sly & Robbie riddim, “Pull Up…” is supposedly about parallel parking, but when Jones instructs, “Pull up to my bumper, baby / In your long black limousine / Pull up to my bumper, baby / Drive it in between”, she’s not thinking about the Highway Code.

Five extended versions of “Pull Up…” appear on Disc 2 amid sundry other 12-inch mixes. The key track here is the unreleased cover of Gary Numan’s “Me! I Disconnect From You” which finds Jones coasting on a warm, rolling groove, the original’s angst thawing beneath a palm tree. This didn’t feature on ’82’s (i)Living My Life(i), the passable final instalment of Jones’ Compass Point trilogy, but it wouldn’t have fitted. Even by then, Jones had moved on, her sights set on Hollywood. The nightclub veteran knew when to make the perfect exit.
Piers Martin

Q+A
Wally Badarou, Compass Point All Stars keyboard player
What was the atmosphere like at Compass Point when you joined?
A bit tense at the beginning, as apart from Chris (Blackwell) and Alex (Sadkin), no one really knew what was in the game: disco or reggae? Luckily, things unfolded without verbal or written explanation.

What are you enduring memories of making Nightclubbing?
The smile on Sly’s face when I improvised the keys on “Pull Up To The Bumper”; Chris’ astonishment when he realised I did the solo on “Walking In The Rain” with a synth; Alex and Chris’ relief when I came up with the high-pitch introduction to “I’ve Seen That Face Before”… Each song had its special moments.

How did the sessions unfold?
We would start at sunset and carry on until we felt we were not productive anymore. No drinking, barely smoking, nothing unusual for the times. Concentrated and relaxed.

What do you remember of the Gary Numan cover?
I had plans for overdubs, but never did them because the song was no longer scheduled. It still sounds unfinished to my ear. It is always interesting that people might like what you felt was unfinished: it is all about where we place the cursor in purposefulness. Fans love it, so be it.

Was there a sense you were making something special with Grace?
At the time, no. So many massive hits from the US and UK were attracting so much attention wordwide, we hardly had a clue about making any durable impact.