Gospel According To Al Green 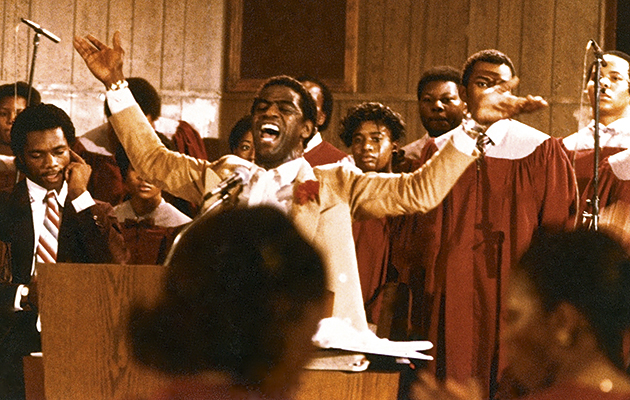 Besides being one of the most joyful and powerful film profiles of a major musical artist ever made, Gospel According To Al Green adheres awfully well to Willie Mitchell’s description of a great song. Al Green’s closest collaborator during the first secular phase of his career, Mitchell explains that a song shouldn’t stay in one place. Instead, it should be like “climbing a mountain”. When you “don’t have any more elevation”, it’s time to fade it out or cut it off. The real magic, Mitchell implies, is figuring out how high you can climb.

Evidently, director Robert Mugge was listening carefully to Mitchell’s advice, judging by the film’s ecstatic finale – a glorious 30-minute sequence featuring Green in full flight, singing and preaching to his congregation. It is rich reward for Mugge’s persistence; the US director chased Green for 13 months for permission to interview and film him in action.

The documentary – newly restored for this DVD and Blu-ray edition – was Mugge’s second project for Channel 4 after Black Wax, his 1982 film on Gil Scott-Heron. Though he was initially asked to profile gospel star Andraé Crouch, Mugge believed Green made for a more compelling subject, the singer having turned away from soul in the late ’70s to help spread the gospel as the minister of his own Baptist church in Memphis. After getting Green’s approval, Mugge hastily arranged to shoot the church’s seventh-anniversary celebration in 1983 with three 16mm cameras and a 24-track recording truck. It was the first (and apparently still the only) service by Green to be extensively filmed.

A few months later, Mugge shot Green and his band performing at an American Air Force base in Washington, DC. As presented here in the original film’s 4K restoration, the results of both shoots are stunning. Indeed, it’s another testament to Mugge’s talent and fortitude that he’s able to keep a camera steady on his exuberant subject as he bounces on his heels before his lectern in his tan-coloured suit, or bounds through the DC crowd to shake hands and share love.

Despite his initial reticence, Green made for a remarkably warm and candid subject during the film’s central interview, shot during rehearsals for the service. Though Green’s more jubilant when reflecting on his hard-won breakthrough with “Tired Of Being Alone” and the “charge of electricity” that prompted his conversion in 1973, he’s still plenty forthcoming on the topic of “the incident”. That was the night in 1974 when then-girlfriend Mary Woodson scalded him with hot grits before fatally shooting herself in his home. Speaking about it publicly for the first time, he relates the sad and grisly details like a man who can scarcely believe the story himself. “Did that actually happen?” he wonders. “I’m asking you – I’m not playing it for the movie.” He’s similarly frank about the complications caused by his newfound faith as he wrestled with his decision to change course: “I mean, I got a million-dollar career going here and I’m telling people they got to talk to Jesus?”

Perhaps what’s most surprising about Mugge’s film is how much it complicates any presumptions about the lines Green drew between the secular and the spiritual when he cast his thoughts heavenward. For instance, he has no apparent misgivings about leading his musicians and singers through a rendition of “Let’s Stay Together” in the rehearsal studio. What’s more, he freely and enthusiastically admits to applying the lessons he learned as a soul performer to his role as a man of God. “I took what I learned from the rock’n’roll,” he says. “The ingenuity, the class, the charisma, the steps, the movement, the hesitation, the wait, the way to be curious. You take all of this that you learn in pop and rhythm-and-blues and you use it to your best advantage.”

The additional ingredient, of course, is the “spiritual fire”. That’s what we witness in Gospel According To Al Green’s sublime finale, along with the astonishing prowess of a rare performer who’s able to surrender to the moment yet remain utterly in command.

EXTRAS: 8/10. Along with overseeing the original film’s 4K remaster, Mugge also created a new seven-minute Making Of doc. The set includes the complete audio of the interview and the whole anniversary church service, an extended sequence for one song, and a phone message by Green for Mugge.