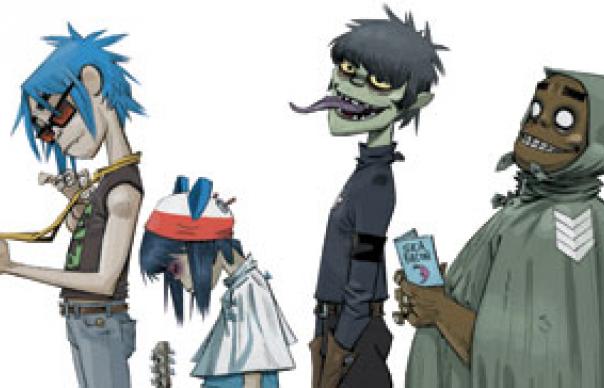 On the recent Blur documentary film No Distance Left To Run, Damon Albarn casually claims that he “invented Britpop”.

It sometimes seems he’s spent the last decade apologising for this. While his more dimwitted rivals continue to pursue a monochrome vision of Anglo-Saxon pop, unsullied by outside influences, Albarn has scoured the world in search of sound: archiving dance music from Trinidad to Iraq, collaborating with Mali’s finest musicians, forming a band with Nigeria’s greatest drummer, and writing a Chinese opera.

And, more to the point, he’s emerged as one of the few Brits who is still able to do what all great British pop stars have done since The Beatles – add a subversive art-school twist to African-American music and sell it back to the States. Gorillaz – a project that had its roots in Damon’s guest slot with hip hop supergroup Deltron 3030 – have shifted more than 12 million albums, twice going double platinum in America. It’s a statistic that ?puts the Blur vs Oasis shenanigans into some context.

Album No 3 sees Albarn and cartoonist Jamie Hewlett take that conceptual edge further. Plastic Beach is a concept album set on a mythical Pacific island, one built from the detritus dumped into the Pacific Trash Vortex. There are various nautical and ecological references, a few recurring characters and some philosophical meditations on recycling, but all get rather lost in the flow of perfect pop singles that tumble out from the album.

Plastic Beach is the first Gorillaz album to be self-produced, and there are points where it lacks the sonic oomph that Dan The Automator gave to the first album or Danger Mouse gave to Demon Days. What Albarn can do effectively is marshall a disparate array of influences – the cultural detritus from his other projects, perhaps. The opener features a slow, strident arrangement for strings that recalls Michael Nyman. The tremendous “White Flag” sounds like a multicultural British national anthem, with grime MCs Kano and Bashy duelling over a mash-up of darbuka drums, Arabic flutes and slurring Bollywood strings. Best of all is “Sweepstakes”, a vehicle for Mos Def, which starts with the arrhythmic bleeps of an arcade game and mutates into a New Orleans funeral march, courtesy of the Hypnotic Brass Ensemble.

And, like a Variety Performance, your expectations rise in the presence of the great and the good. Wow – that’s Lou Reed on ”Some Kind Of Nature”! And he’s singing what sounds like a track from Transformer! As played on Fisher- Price toys! And wow again – that’s Mick Jones on the title track! With Paul Simonon playing the bassline from “Guns Of Brixton”! With Damon dicking about on a Stylophone! And who’s that on “Superfast Jellyfish”? It’s a vaudevillian turn from De La Soul! And a fantastic chorus from the bloke out of Super Furry Animals! And isn’t that Snoop Dogg ?on “Welcome To The World Of The Plastic Beach”?

Some of the cameos disappoint. “Glitter Freeze” starts with Mark E Smith dead-panning “Where’s north from here?” over a fine Glitter Band schaffel stomp and a barrage of wobbly Theremins and Morse Code synths, but his voice doesn’t re-emerge for another few minutes, and that great intro peters out into something faintly unsatisfying.

“Stylo” is another disappointment, and a strange choice for lead single. Over the bassline from Mis-Teeq’s “Scandalous”, Damon sings, Bobby Womack hollers and Mos Def rhymes, and none of them sound like they were even on the same continent, let alone the in same studio. Indeed, one slight danger is that the mass of cameos drown out the four songs that Albarn sings alone, in particular “Broken”(a pretty ballad that earns comparisons with Blur’s “Out Of Time”) and “Pirate Jet” (an infuriatingly catchy glam rock pastiche).

But for all its flaws, Plastic Beach is still a fascinating and frequently brilliant album. ?It displays a sonic ambition, an open-mindedness and a melodic gift that puts ?so much modern pop to shame.
John Lewis