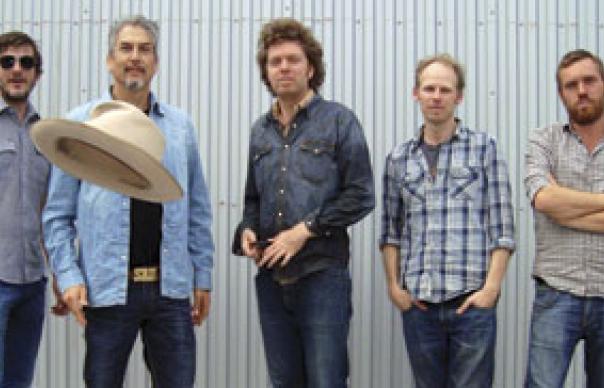 It’s a fair bet that Paul Weller finds that whole “Modfather” thing pretty tedious. By the same token, you suspect that Howe Gelb must get fed up being referred to as “the Godfather of Alt.Country”.

After all, Gelb’s 25-year recording career with Giant Sand (30 if you count its original incarnation as Giant Sandworms, the Arizona troupe he founded with late guitarist Rainer Ptacek) has seen him trade jazz, blues and folk with punk, Mexicali and Morricone – plenty of alternatives, in fact, to country music.

Giant Sand’s roots in the Southwestern desert may afford them rights to the authentic twang of lo-plains country, but Gelb likens himself more to a jazz musician. He’s happiest heading up a loose collective of like-minded souls, his largely improvised songs informed by a wanderlust, a search for happy accidents.

It’s made for some of the most hallucinatory music of the last three decades, either as Giant Sand or solo, sometimes with offshoots like The Band Of Blacky Ranchette – all of these fronted by Gelb’s unique voice, an instrument that’s become more steadfastly laidback as the years have crept by. It has to be said, before we get too carried away, that the same approach has also resulted in some less memorable, rather more ponderous moments.

But that’s all part of Gelb’s enigmatic appeal. His influence is sizeable. Though now partly resident in Denmark, he was for many years the mainstay of the underground Tucson scene. Joey Burns and John Convertino began in Giant Sand, before striking out as Calexico, while other protégés and collaborators have included M.Ward, Grandaddy, PJ Harvey, Vic Chesnutt and Neko Case. Blurry Blue Mountain marks the beginning of a concentrated flurry of Giant Sand activity. The next 12 months will see a comprehensive reissue programme – one already begun with their 1985 debut, Valley Of Rain – and on through solo work, various side projects and a couple of hefty boxsets.

One thing you’re likely to notice is that, essentially, Giant Sand haven’t changed much. Nowadays there are more Danes than Americans in the band, but the essence is the same. Shuffling rhythms suddenly break sweat into something more immediate yet indistinct. Sad-slow plinks of piano make way for cowboy choruses; train songs rumble into percussive, jazzy numbers. There’s walking bass, swamp blues and Gelb himself, for the most part singing like a man still stirring from slumber and groping for the nearest lamp.

That said, as with 2008’s Provisions, Giant Sand are a more urgent proposition these days, as if age has somehow sharpened Gelb’s appetite. Outlaw tale “Thin Line Man” is a case in point, a thrillingly concise remake of an old ’80s song that clocks in at half the length of his seven-minute original. “Ride The Rail” fairly rattles along too, recounting the tale of the Molly Macguires – the Irish emigrant coal miners who took on the authorities in 19th century Pennsylvania, Gelb’s home state. The soft gait of “Fields Of Green” often appears to be a meditation on time and the ageing process. And his own unwitting/unwilling role as patriarch of some larger musical family, country or not. “Now I amble over 50/And the longest hours move so swiftly/Such young fresh folk look to me as a pathfinder,” murmurs Gelb, before telling everyone to just be quiet and listen to their own hearts instead.

Playfulness abounds here. Anyone familiar with Gelb’s propensity for wordplay will admire the way he elects to rhyme “prayer” with “Leo Sayer”. Or conjure a fireside tale wherein Daddy’s out back listening to Haggard while Momma’s getting down to Thunderclap Newman.
Suffice to say that Blurry Blue Mountain is a lovely, oddly charming record. And in the unlikely event that it doesn’t move you, there’s a whole heap of past glories just waiting to be discovered.
ROB HUGHES

Q+A HOWE GELB
How has your approach to making music changed now you’re into your fifties?
On this LP I show off an acquired appreciation for the simple lyric. Kinda haiku at times, like flamenco verse, or the blues. I can focus more as it’s obvious there’s only so much time left – that has a production value all its own.

“Fields Of Green” suggests that upcoming musicians tend to see you as an elder statesman. Do they ask for advice?
Most of my advice is on record. I can only reveal what I wish someone would’ve revealed to me along the way. If the older me met up with the younger me, I’d now know what to do with me. But back then, getting this old seemed out of the question.

There’s a mammoth Giant Sand reissue campaign under way. Did you ever think you’d last this long?
30 years ago, living in the desert made it hard to get music recorded and released. The goal was a vow between myself and Rainer Ptacek not to make records that would embarrass ourselves 20 years on. I can at least say I achieved that, but Rainer’s records do more. They still release a stunning amount of information embedded like a time capsule, encoded within every track.
INTERVIEW: ROB HUGHES