The Godfather of Soul biopic... 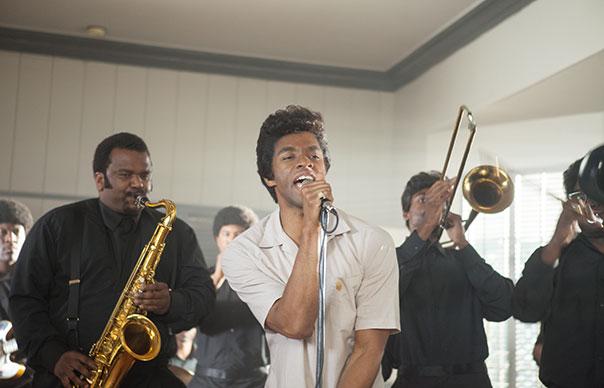 The Godfather of Soul biopic…

“You cats ready?” Chadwick Boseman’s James Brown asks the audience directly early in Get On Up. It’s a surprisingly audacious move for a rock biopic. Cinema has always enjoyed telling a good life story, and you could be forgiven for assuming that the ones accompanied with lashings of sex and drugs and a profitable spin-off soundtrack album would be among the best. But – as recent biopics of Ray Charles and Johnny Cash have proved – even the most transformative of performer can have his life story rendered in the most banal fashion. Todd Haynes’ I’m Not There, at least took a novel approach as it addressed the mass of contradictions Bob Dylan embodies by casting six different actors as the musician, including a young black boy and a woman.

Now, it’s James Brown’s turn in the movie spotlight. Under the auspices of producer Mick Jagger, Get On Up carves out the usual Hollywood story arc of affliction, transcendence and – for the true believers – unadulterated affirmation. But, surprisingly, it is delivered – in the early stages, at least – with a welcome lightness of touch. The story opens in 1988, with the Godfather of Soul, wearing a dapper green velour tracksuit, blowing chunks out of the ceiling at his corporate offices with a shotgun.

Anyone familiar with Pop Will Eat Itself’s “Not Now James, We’re Busy” will doubtless be aware of the events that follow, as the police chase Brown from South Carolina to Georgia. It’s a lively start, for sure. From there, the film loops back and forth, trying to unburden itself from the shackles of genre convention by breaking the fourth wall, shooting the early scenes of his hardscrabble childhood like weird, elemental Southern Gothic. But, alas, it doesn’t sustain the lively momentum.

Before you know it, Basil Exposition has taken over (“If you stand up Lyndon Johnson and suck up to the Panthers, you ain’t going to be playing Vegas anytime soon,”) and the film begins to stumble through all the usual genre pitfalls. Chadwick Boseman is charismatic as Brown – a violent, manipulative perfectionist who is emotionally disconnected from those around him. The script, by British playwright Jez Butterworth and his brother John-Henry, is driving, constant, fluid; like Brown’s music. But director Tate Taylor – who gave us the woeful Oscar-bait of The Help – doesn’t quite seem able to grasp the liquidity of Boseman’s performance or the wit of the Butterworths’ script.
Michael Bonner