Sumptuous boxset of the ex-Beatle’s 13 solo albums, on heavyweight vinyl with repro sleeves 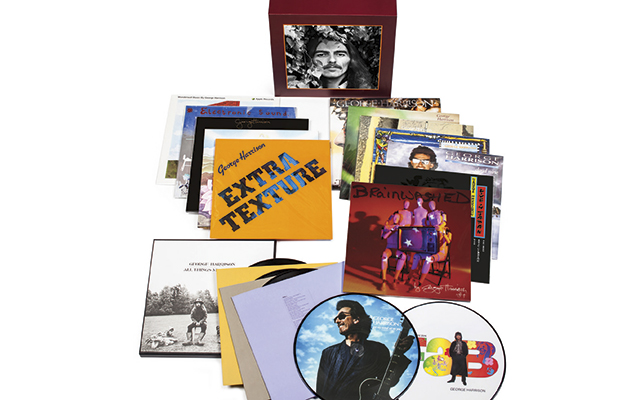 As a solo artist, George Harrison’s big mistake was his first; putting out an album that he was never able to better. All Things Must Pass, released in November 1970, looms over the rest of his output like a beautifully chiselled monolith that he could never emulate, and against which all subsequent albums were measured and found wanting.

It’s arguably an unfair judgment. All Things Must Pass arrived as an unexpected cornucopia from a man customarily allotted just the one ‘George song’ per Beatle album (a source of chagrin for Harrison, whose attitude to his former band was rarely warm), and who had been storing up songs. Though two sides of its three LPs were indulgent jam sessions, its other four boasted a potent mix of romantic and spiritual numbers, including a brace of tunes from Bob Dylan, a massive hit in “My Sweet Lord” (subsequently judged as a sub-conscious lift of The Chiffons’ He’s So Fine) plus a hefty sonic punch courtesy of co-producer Phil Spector. According to George, Phil needed a few cherry brandies to get him up and alive in the morning, but without Phil, no Wah-Wah.

Compared to the lo-fi acoustic sketchbook of McCartney, released in spring 1970, and the pungent minimalism of Lennon’s Plastic Ono Band, which arrived in December of that year, ATMP maintained the florid sound and socio-spiritual idealism the Beatles’ global public expected. Little wonder it sold so well.

The need for a follow-up was displaced by 1971’s The Concert for Bangladesh, arranged by George at the request of Ravi Shankar, an event that marked the birth of rock charity. The resultant live album isn’t featured here, but helps explain why 1973’s Living In The Material World arrived on a wave of goodwill that made it a chart-topper, though the good faith wasn’t repaid by the stodgy rock and pious, self-righteous songs that lay beyond its joyous hit single “Give Me Love (Give Me Peace On Earth)”. Stung by criticism, Harrison never again made an album so overtly drenched in Hinduism, thus sparing us advice like “Remember, A mind that wanders round a corner is an unwise mind”.

Having all of Harrison’s albums gathered in one place may promise a narrative arc through his solo career and life, but played back to back what comes across is their consistency, predictability even. “Guitars, basic drums and analogue tapes – that’s the way I like it. It doesn’t go with trends. My music just stays what it is,” George summarised bluntly towards the end of his life.

There are a few exceptions, most obviously the Indian experimentalism of 1968’s Wonderwall and 1969’s Moog-driven Electronic Sound. 1975’s Extra Texture might also be considered something of a one-off, being made largely in Los Angeles with a bunch of session players and in a vaguely soul-funk style.

Otherwise, the records bleed pretty much seamlessly into each other, helped by Harrison’s habit of using old songs on new albums and getting the usual suspects to play on them; Clapton, Keltner, Preston and Starr among them. Every album has its high points and its champions, even those rubbished at the time have been latterly reassessed as ‘minor masterpiece’, ‘overlooked gem’, ‘return to form’ and the like. It is a matter of personal choice and, one suspects, personal history. For example, the introvert Extra Texture, dismissed by George himself as “grubby”,turns out to be a favourite of his wife Olivia.

What’s clear is that George’s musical career became way less important to him after the pivotal year of 1974, which saw him build his own studio, establish his own label, Dark Horse, produce other people’s albums, undertake a badly received North American tour alongside Ravi Shankar, and split with his wife Pattie Boyd. He reached the sanctuary of his beloved Friar Park badly mauled; “the nearest I came to a nervous breakdown”.

Thereafter Harrison worked to his own schedule. His touring days – which had turned stale for all the Fabs in the Mid Sixties – were firmly behind him. Music took second place to his role as film producer (where his output was prodigious), to the restoration of his garden, and to his interest in fast cars. Krishna, cocaine, Formula One – Harrison, allegedly ‘The Quiet Beatle’, was in reality a complex, contradictory personality.

It’s likely no coincidence that Cloud Nine, by far the most polished and successful of the later albums, had, like All Things Must Pass, an outside producer involved, with Jeff Lynne giving it a sheen of Electric Light Orchestra, and taking George back to the top of the singles charts with |Got My Mind Set On You”. By then, Harrison’s cob with the Beatles had softened as When We Was Fab, a minor hit, proved. “All Those Years Ago”, his 1981 tribute to Lennon, had also given him a rare hit.

The mood on George’s post-74 output is softer and less judgmental than on his early output – he had nothing to prove – and their delights are often unexpected. On 1982’s much dismissed Gone Troppo you’ll find the dreamy “That’s The Way it Goes”, the laughalong title track and some gorgeous Hawaiian ukulele. 1981’s Somewhere In England has Save The World, considered soft protest at the time but beautifully played and never more relevant than today. Perfect cameo guitar solos are sprinkled liberally around – Harrison was, even in the Beatles, always an underrated axeman. It’s a mild shock to hear him rattle so confidently through his back catalogue on 1991’s Live In Japan, an undervalued album.

Brainwashed, completed after George’s passing in 2001 by his son Danu and Jeff Lynne, is a touching epitaph. Harrison’s vocal cords are shot, but contemplative songs like Pisces Fish offer a glimpse into a gentle soul.

Extras: 12” single Picture Discs of When Was Fab/Zig Zag/ That’s The Way it Goes remix/When Was Fab Reverse End and Got My Mind Set On You extended/Lay His Head.