Creators of The Wire tackle ultra-violence in Iraq 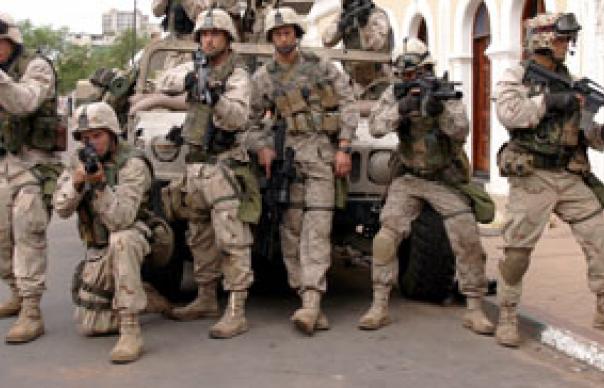 One of the scenes from Evan Wright‘s book Generation Kill not to be filmed for David Simon and Ed Burns‘ new miniseries of the same name is a striking interlude involving a gas mask. In the book, the Rolling Stone reporter spends time preparing for the period he will spend “embedded” with troops in Iraq – specifically, what to expect in a chemical weapons attack. In this event, Wright is instructed, it is possible that he will vomit into his mask, blocking his airway. The reporter is then told of his options. He can suffocate. He can remove the mask and face the nerve agent. Or, he can clear the blockage – by eating the vomit.

Military literature and drama is, of course, filled with accounts of such unenviable choices, and Generation Kill is no exception. A seven part, sumptuously-filmed series made by the creators of The Wire, it follows – more or less – the narrative of Wright’s experiences. Reporting from what eventually became known as Operation Iraqi Freedom, Wright (in the show just known as “Scribe” or “Reporter”) spends the best part of a month inside an armoured jeep (or “Humvee”) with the personnel of First Recon Marine, in particular with an unflappable sergeant, Brad “Iceman” Colbert, (Alexander Skarsgard), and the motormouth, stimulant-gobbling driver of their Humvee, Ray Person, (played by James Ransone, the Wire’s Ziggy).

This physical situation, really, is Generation Kill’s biggest strength. Neither, thank God, Iraq as homily (like Brian De Palma‘s movie Redacted) or as personal journey (like the marines in Gulf movie Jarhead, from which this is distanced by 10 years and a lot of different nomenclature), this, interspersed with moronic chatter and bodily functions, is more like Iraq as road trip. To the team onboard it, the ultraviolent military operation and human tragedy playing out outside the Humvee is at worst, hostile, at best, entertaining.

It’s a claustrophobic point of view that Generation Kill exploits with some skill, but how the makers thought anyone could ever simply sit down and watch an episode of this, then wait a week for another episode is mind-boggling. So frustrating is the plot (like the marines themselves, the viewer is at the command of the Generals, who decide what’s going to happen next), and generally alien the scenario, it requires the immersion of the box set form to get anything out of this. It’s likely only freelance journalists will have the time or inclination to watch this twice – but really, it’s the best way to get involved in an otherwise rather uneven experience.

That’s to say that for viewer and Marine alike, the situation here is one that veers unpredictably between the mind-numbingly boring (“watch your sectors!”) and the frenetic (the occasions when the men come under enemy fire). Rather than unfolding as a rich, novelistic experience like The Wire, a series where clues, and character developments build up a bigger picture from both sides of a conflict, Generation Kill proceeds in fits and starts, less a narrative with depth and development, more one with a series of violent bumps along its surface.

That’s not to say there aren’t some familiar riffs from The Wire here. A general fascination with the language and routines of men at work. The frustration of having a poor line manager. Most particularly, there’s the same resounding critique of short-term solutions that Burns and Simon put to work in that show: the disparity between what is, and what should be, what’s right, and what’s expedient. In (i)Generation Kill(i), it’s something we’re introduced to via the conscientious soldiering of Brad Colbert. He wants to change things. Unfortunately, though, that’s not his job. As a superior officer tells him, with some depth of meaning: “We’re not cops…”

It’s a frustrating situation, but the wisdom of the masters is something a soldier can question, but ultimately must obey. In the person of “Godfather”, a man whose eyes glint with the possibility of new military challenges, that’s no bad thing. In one memorable scene, he turns from his map, and informs his officers of his thinking on manoeuvre warfare, America’s battle operating system for the 21st century. He refuses, he says, to let the enemy “dictate the tempo”.

Generation Kill does much the same. Given the option of doing the same sort of thing again, or trying something entirely new, Burns and Simon have refused to have the tempo dictated to them. An unenviable, almost military choice, certainly, but one that in the long term you’ll be glad they made.

EXTRAS: 3* Episode commentaries, Making Of doc, and Interviews with the real marines.