The crown has slipped for the Scottish pop kings 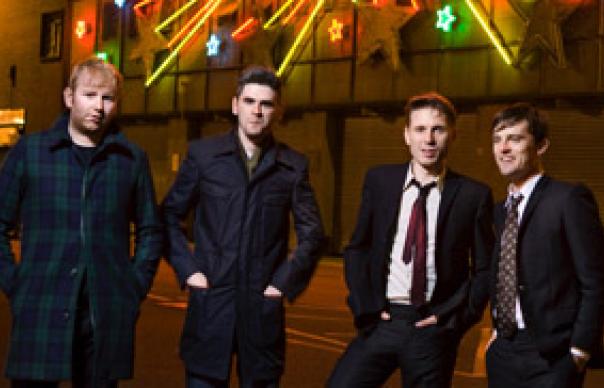 When Franz Ferdinand strode purposefully into the Top Ten in January 2004 with “Take Me Out”, they were welcomed like liberating forces to a besieged town. Clever but not too clever, posh but not too posh, rambunctious but not too edgy, brand new but retro – a flash of those glimmering white teeth and we were theirs.

Not since Blur ten years earlier had there been a gang of art school boys with the wit and the gumption to trouble the hit parade. We shouldn’t have cared about these things, but we did: we wanted to see our boys in there sparring with Pop Idol winners and Black Eyed Peas. Even better, Franz were signed to righteous indie institution Domino. And their sleeve designs referenced Russian constructivism! And they were a bit like a slicker Orange Juice! Somebody give these chaps a Mercury Prize!

Since then, a whole gaggle of Kaiser Chiefs, Futureheads, Arctic Monkeys and Maximo Parks have nonchalantly bowled through the door Franz Ferdinand blasted open, making what they do seem commonplace. A hasty second album, 2005’s You Could Have It So Much Better, failed to sustain the momentum in quite the way they’d hoped.

Recently Franz Ferdinand appear to have been taking tips from Damon Albarn on how to successfully negotiate your way out of a creative cul-de-sac. They’ve backed platinum US rapper TI in New York and jammed with Baaba Maal as part of the Africa Express. They built their own studio from scratch in an old drug rehabilitation centre in Govan, blooded a hot young producer in Dan Carey and roadtested their new songs at a series of secret gigs everywhere from Fort William to Glastonbury.

So after all that, the fact that Tonight: Franz Ferdinand sounds so dry and superficial is a nagging disappointment.

There’s no need to call in the receivers just yet: lead-off single “Ulysees”, is actually rather terrific, its louche shuffling beat complemented by vampiric synth snarls and a particularly devilish Kapranos vocal (“C’mon, let’s get hiiiiigh!”) before exploding into a typically contagious Franz chorus. The alarm bells only start to ring when you realise that you can comfortably sing “Take Me Out” over the top of it.

Squirty vintage synth lines pervade the album. This is hardly a revolutionary move at a time when kids are wigging out to the abrasive electronic squall of Crystal Castles, but they do add an impish zip to “What She Came For” and “Bite Hard”. Eno-era Roxy Music is the obvious stylistic template, but just as often the addition of keyboards simply makes Franz Ferdinand sound a bit more like the Kaiser Chiefs.

Only on “Lucid Dreams”, as Tonight enters its fourth quarter, are their new toys employed as anything more than a novelty turn, the song eventually surrendering to a shuddering acid house freakout in the manner of LCD Soundsystem’s “Yeah”. It’s exhilarating, although as with “What She Came For”’s pell-mell motorik coda, it does feel bolted on.

Meanwhile, Alex Kapranos still sounds like he’s singing with a permanent wink. You can understand his eagerness to avoid the grim self-reflection that traditionally plagues the third album of any band on the treadmill, but he’s over-compensated, his lyrics now existing almost solely of quivering come-ons.

By the time he gets to the queasy “Twilight Omens” – “I typed your number into my calculator/ Where it spelled a dirty word when you turned it upside down” – you’re ready with a jug of icy water. He’s like a bad Terry Thomas character, tipsily attempting to crack onto girls half his age by offering them a spin in his Triumph. “Turn It On” does appear to deliberately blur the line between seduction and stalking, but Kapranos is no Jarvis Cocker.

You’re willing him to ditch his roué’s routine or for the band to loosen their rigid backbeat but when they do, as on lightweight psychedelic pastiches “Send Him Away” or “Dream Again”, the results are limp.

The inescapable feeling is that we could have had it so much better. For all their adroitness, most of the songs on Tonight sound too similar to each other (and to existing Franz Ferdinand songs). It all feels so contained – there’s precious little cutting loose, no ambiguity, no vulnerability. Emotionally, it’s as plastic as the songs pumped out of the Xenomania hit factory where this album was nearly recorded.

Franz Ferdinand would apparently rather be swashbuckling cartoon pop stars than risk-taking, soul-baring artistes. Which is fair enough – but even cartoon pop stars have to keep reinventing themselves to hold our attention. On Tonight, the trousers are still tight but the grins are in danger of wearing thin.