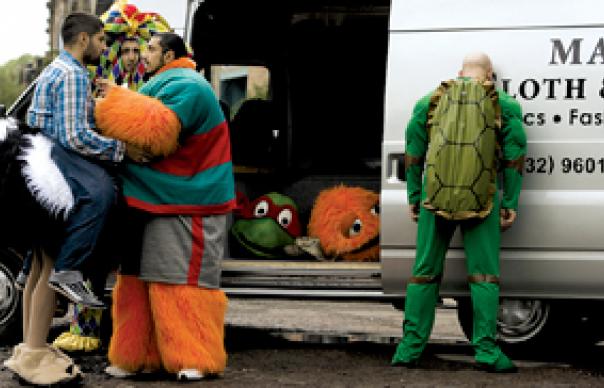 
Chris Morris’ reputation as a fearless satirist, forged by The Day Today and Brass Eye, is so entrenched that you can forget that his work also has a whimsical sitcom aspect – look at his contributions to the amusing but insubstantial Nathan Barley and The IT Crowd.

Four Lions, his long-anticipated comedy set amid the 21st century jihad, is – perhaps surprisingly – spiritual kin to these latter efforts. Though the humour is grim, it is essentially gentle. Morris and the film’s writers – Peep Show creators Jesse Armstrong and Sam Bain – depict the modern holy warrior as hapless rather than evil, more to be pitied than blamed.

They have half a point. Amid the hysteria that’s surrounded the subject since September 11, 2001, the great unsayable has been that most terrorism is rubbish – planned by idiots, executed by morons. Such notable atrocities as 9/11, 7/7, Bali or Madrid were distinguished as much by their competence as their body counts – bids to smite the infidel have more often ended with the would-be perpetrator getting lamped by a Glaswegian baggage-handler or hauled off an aircraft with singed underpants.

Four Lions conjures a British terror cell of exactly this species of dunderhead. Omar (Riz Ahmed) is ringleader in the way that a one-eyed man ends up ruling a kingdom of blind men. Faisal (Adeel Akhtar) is a descendent of Pike, Manuel and Baldrick, harmless and decent, but paralysed by stupidity. Waj (Kayvan Novak) is the dim, enthusiastic cannon fodder necessary to any paramilitary outfit. Barry (Nigel Lindsay) is a white English convert to Islam, inevitably the most boneheadedly militant of the lot. Barry represents that gratingly persistent strain of the Left that will adopt any position, however foolish or disgusting, so long as it pits them in self-righteous opposition to their own country and culture. A few decades ago, a posturing buffoon like Barry would have been a Communist – and the inspiration for Wolfie Smith (Barry’s self-appointed role as “Founder of the Islamic State of Tinsley” is surely a tip of the turban to Citizen Smith’s Tooting Popular Front).

The characters are well acted, and astutely written. Especial care is taken not to turn Omar into a cartoon villain – in an obvious tug on our perplexed memories of the largely ordinary, even admirable, suburban lives of the 7/7 bombers, Omar is depicted as a doting father, adoring husband and genial chap, even to the extent of teasing more devout Muslims about their humourless piety. More crucially, he’s also a stock British comedy lead, believing himself – like Captain Mainwaring, Basil Fawlty and Edmund Blackadder – denied his glorious destiny by the imbecility of his colleagues, which in turn blinds him to his own failings.

The quartet journey to London, intending to visit righteous carnage upon the Marathon. What unfolds is funny without quite being hilarious, tragic without quite being affecting, the satire a series of gentle swipes which never quite threaten to rattle their targets. Perhaps Morris thinks it is statement enough merely to make any sort of satirical foray at Islam, however tentative. Perhaps he’s nervous. He’d have good reasons for this, of course. Theo Van Gogh, approximately Morris’ Dutch equivalent, made a more explicitly confrontational film about Islam in 2004, and was subsequently executed for his troubles on an Amsterdam footpath. And Van Gogh is scarcely alone in having been murdered or threatened with death for having the temerity to ask questions about what Muslims choose to believe.

For whatever reason, Four Lions rather shies away from considering what terrorists think, and concentrates its mockery on what they do. This does result in some moments of priceless slapstick, most of them involving the nice but pathologically dim Faisal, with his useless disguises and cunning plans for exploding crows. The difficulty, whether it was Morris’ intention or not, is that it all feels a bit affectionate, as if the subjects of Four Lions – and, by extension, all putative terrorists – are merely over-excited larrikins who’ll grow out of it eventually.

The single most venomous jab in the film is made at the British security services. In the climactic scenes, a confused police sniper misidentifies a suspect, brings down the wrong man, and says, “It must be the target, I shot it.” In itself, this is a brilliant line of Joseph Heller-esque circular logic. In context, this obvious reference to the death of Jean Charles de Menezes feels like cheap equivalence. The police officers who shot Menezes did not wake that morning intending to kill an innocent person. The bombers of 7/7, and their would-be comrades of 21/7, woke intending to kill as many as possible. Someone possessed of Morris’ rugged moral compass should be able to perceive the difference.

That said, Morris does deserve credit for resisting the common temptation to blame the victims of Islamist terrorism – there’s little credence given here to witless “root causes” theories with which many of Barry’s western fellow travellers excuse the depravities of terrorists. When Omar explains his plans for martyrdom to his son, he does so with clumsy, childish reference to The Lion King, and the internal ideological dicussions of the quartet are an (inevitable) echo of the deliberations of the People’s Front of Judea. There’s also a deft dig at the ridiculous post-9/11 conspirazoid tendency, in Barry’s idea for the cell to blow up a mosque to frame their enemies.

At the heart of Four Lions is the idea that we should perceive fanatics as humans, rather than demons. There is much to be said for this: it’s arguable that it would have been more constructive, after 9/11, for western press and polity to characterise Osama bin-Laden as a dingbat loser ranting in a cave, rather than an omnipotent bearded Blofeld. But by refusing to be quite as bitter and bleak as it could, and probably should, have been, Four Lions ends up feeling weirdly trivial, ultimately little more – though certainly no less – than a diverting knockabout farce. Damningly faint praise to find oneself singing about a Chris Morris film about terrorism.
ANDREW MUELLER