Bigger not necessarily better for Florence... 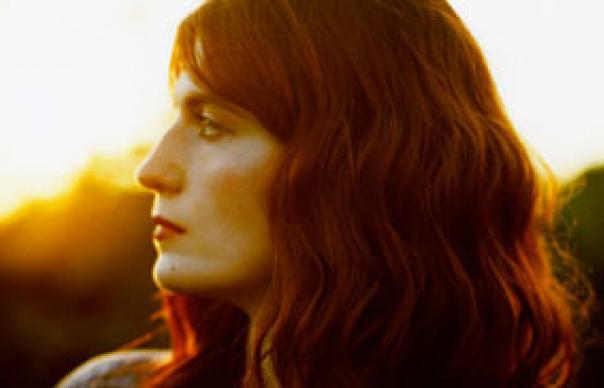 From winning the BRITS Critics’ Choice in 2009 to scooping the Best British Album the following year, the rise of Florence + The Machine has been inexorable and irresistible. The same momentum suggests that, having been nominated for a Grammy in 2010, she will now look to follow Amy and Adele in conquering the US and the world. Ceremonials certainly feels like an album with imperial ambitions. Twelve tracks and almost an hour long, it’s an unashamedly, overwhelmingly epic bid for the big time.

It is odd to remember that Florence once seemed the least convincing of 2009’s class of edgy pop hopefuls. Not as determinedly styled as La Roux, without the hip-pop affinities of Little Boots, her debut album Lungs often seemed like it was chasing old trends, from the Liberteeny skiffle of “Kiss With A Fist” to the Kate Bushery of “Rabbit Heart (Raise It Up)” and the blue-eyed soul of “Cosmic Love”. What ultimately secured her triumph wasn’t just her style – Ken Russell casting a female lead for a Lizstomanic take on the Pre-Raphs – or her timely gels-gone-wild-at-Glasto demeanour, but the gale force voice and performance that blew away reservations of place and genre, from the London indie circuit to V Festival, the Dizzee heights of the BRITS awards to collaborations with Drake and hanging with Beyoncé.

Ceremonials is altogether more focused, designed to provide the proper stage for the global push. The overtures were encouraging. Album trailer “What The Water Gave Me” arrived burdened with allusions to Frida Kahlo and Virginia Woolf, but indicated producer Paul Epworth had created a cavernous, detailed soundworld, glittering with harps, booming with bass, like Mark Hollis producing All About Eve. It suggested that Ceremonials might be a work of sublime English pastoral pop: “River Deep, Mountain High”, if the river was the Ouse and the mountain was Scafell Pike.

But if “What The Water…” was suggestively atmospheric, promising a climax that never quite arrived, the first single proper, “Shake It Out” plainly means business. From a deceptively rueful harmonium intro, the song wastes no time charging into a chorus that seems scaled not just for festivals or stadiums but for colosseums. So efficiently does it splice 21st-century Arcade-Fire anthemry with ’80s enormo-dome aesthetics, by the time the third chorus rolls around you fully expect it to be accompanied by the entrance of John Farnham’s stadium bagpipes.

Elsewhere, Florence seems to have abandoned the struggle to restrain her inner Céline Dion. “Never Me Let Go” is a titanic ballad (calculatedly so, right down to the lines “the arms of the ocean are carrying me”) shamelessly auditioning for the soundtrack of the next James Cameron folly. Like the similarly grandiose “Heartlines”, it features the kind of pseudo-tribal backing vocals last heard on Red Box’s would-be Earthsong “Lean On Me”. Florence once described Lungs as sounding like “a choir, a harp, some metal chains and a piano all put through a car crusher”. Ceremonials, you might say, sounds like a dry iceberg, the Na’vi People’s Choir and Sydney Opera House, re-assembled by Jim Steinman in the Hadron Collider.

It’s less impressive than that might sound. Songs like “Only If For A Night” and “Seven Devils” still try to summon the uncanny spirit of Kate Bush, but they retain little of the modernist shock of her best work. Epworth’s early production of the Futureheads’ “Hounds Of Love” has proved characteristic of his career: honouring the pioneering heritage of British pop, but tastefully draining it of the Fairlight stabs, the gated drums, the scandalously synthetic elements that might offend more conservative modern palates.

If Ceremonials has a presiding spirit it might actually be Annie Lennox – particularly the Eurythmics circa “Be Yourself Tonight”, when they drafted in Stevie Wonder and Aretha in a bid to endear themselves to America. “Lover To Lover” and “Leave My Body” aim to repeat the trick of “You Got The Love”, channeling Hurricane Florence in a more gospel direction. Like Annie, Florence can undoubtedly sing up a storm, but even when she’s singing “there’s no salvation for me”, her relationship with real abandon feels oddly theoretical.

Like the similarly Lennox-indebted Lady Gaga’s Born This Way, Ceremonials feels afflicted by its ambition, the desire to create an album so epic it miraculously re-establishes the mainstream pop blockbuster in an age of fragmented niche audiences. The result is exhausting, an album of songs that all want to be showstoppers. The high points are those tracks that offer some breathing space from the bombast: “What The Water Gave Me”, but also “Breaking Down”, a sole writing credit for James Ford on an album largely dominated by Epworth, and a song oddly redolent of The Waterboys of This Is The Sea. Moments like this suggest there might yet be other ways for Florence to reach the Big Music she seems intent on.
Stephen Trousse