Flight Of The Conchords – Series Two

Return of the hapless comedy duo, now with added “Garfunkelling”. 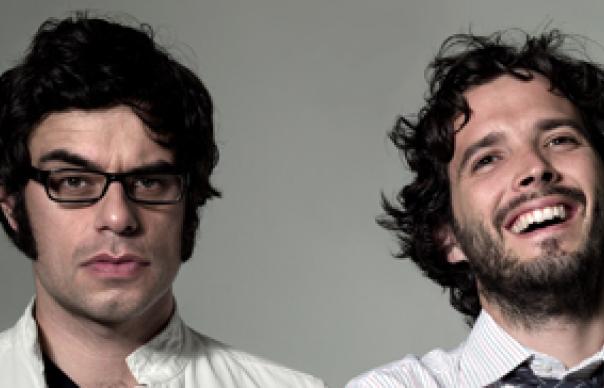 Jemaine Clement and Bret McKenzie have not, it’s fair to say, been spoiled by success. The first series of Flight Of The Conchords, about the New Zealand duo’s useless attempts to find pop stardom in New York, resulted in largish cult acclaim, as well as that true rarity, a comedy spin-off album that stood up to repeat listens.

For the second and apparently last series, however, little has changed – except, possibly, that Flight Of The Conchords have sunk even lower. Bret and Jemaine (their characters in the show, that is) remain failures as a band, as lovers and, mostly, as functioning adults.

They approach the world with the same sweet, ingenuous bemusement, and still hang out with the same tiny and dysfunctional crowd: Murray, their manager (played by Rhys Darby), a Kiwi even more naive – though substantially more self-deluding – than they are; Mel (Kristen Schaal), their sole, deranged fan, and her agonisingly stoical husband Doug (David Costabile); and the marvellous Dave (Arj Barker), a pawn shop clerk.

Barker takes a pleasingly bigger role in Series Two, expanding on his job of acting as an unreliable guide to New York. Part of the programme’s charm, though, is that this New York is only fractionally more populous and threatening than New Zealand (traffic and crowds are eerily absent), and that the notionally streetwise Dave is every bit as gauche as Jemaine and Bret. “Women,” he advises in Episode Nine, “like three things: men in kilts, Southern Comfort and Chris Isaak’s ‘Wicked Game’.”

Women, in fact, bring out the dubious best in Flight Of The Conchords. The finest episodes in this batch of ten come when one or both of the pair falls more or less in love. Episode Six, Love Is A Weapon Of Choice, finds them pursuing the same girl, like an indie Morecambe & Wise, and becoming preoccupied with dog epilepsy.

Episode Seven, Prime Minister, involves a woman with an Art Garfunkel fetish, and also Brian, the – unworldly, of course – Prime Minister of New Zealand. And Episode Five, Unnatural Love, may be their greatest half-hour, a treatise on the dangers of dating Australian women directed by Michel Gondry, who clearly shares Clement and McKenzie’s underplayed, whimsical aesthetic.

If there’s a problem with Series Two, it’s that the pair’s new songs don’t stand up quite as well as those, written over a period of many years, from Series One. The exception is “Carol Brown”, soulful indie-oompah with a neat video from Gondry and a ravishing chorus of Jemaine’s ex-girlfriends. It reveals, once again, how Clement and McKenzie would make very decent pop stars – if they weren’t cursed with the gift of being so funny, too.