Dreamy hymns of the American wilderness 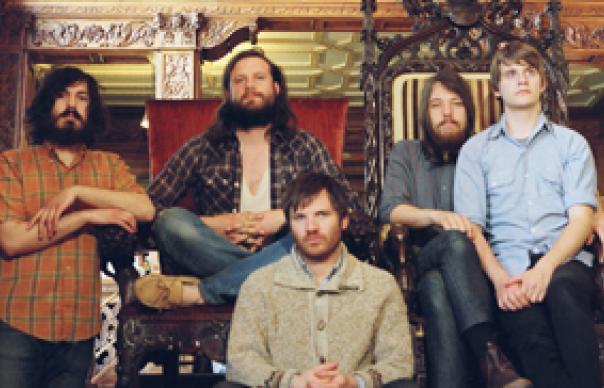 In the July issue of Uncut magazine, Sam Richards calls the new record by My Morning Jacket, “slick, simmering and – dammit – sexy”. For some of us, though, Jim James’ noble experimental spirit is distracting him from the music that he makes best. Listening to “Highly Suspicious”- a needy, Robert Palmer-ish take on funk – it’s hard not to long for the time when My Morning Jacket were merely a cosmic Southern rock band.

Of course, the pain of MMJ’s departure from some metaphysical backwoods has been mediated these past couple of years by the emergence of Band Of Horses. And now, even better, along comes the debut album by Fleet Foxes, a commendably hirsute five-piece from Seattle. Fleet Foxes don’t rock much, though the opening “Sun It Rises” does have a clanging guitar line that could well propel them into gutsier territory live. They have an echoing, sepulchral air: anyone who’s fixated on Jim James songs like “Golden” should find plenty of solace in “Ragged Wood” and “Your Protector”, for a start.

It’s a highly aestheticised, mud-free treatment of folk, certainly – but then you could probably say the same of Crosby, Stills & Nash. At times, the massed voices that usher in a song like “White Winter Hymnal” are purposefully reminiscent of the Sacred Harp singing tradition that once flourished in white southern churches. But then, on a song like “Quiet Houses”, the pristine harmonies are closer to The Beach Boys: combined with firmly plonked piano, bells and what sounds like a six-string bass, it’s a glorious descendant of “Smile” ephemera like “Fall Breaks And Back To Winter”.

Some Americana fans may find Fleet Foxes too precious and evanescent to be treated seriously. But like the equally rapturous “Sun Giant” EP which preceded it, Fleet Foxes’ debut album is a fastidious, sometimes overwhelmingly pretty evocation of the American wilderness; a dreamy companion piece to last month’s superb Bon Iver album. And an escapist fantasy, perhaps, to compare with the very best hymns – never mind My Morning Jacket.
JOHN MULVEY

Do you come from a rural background, or are you city boys dreaming of one?

We were all living in fairly bad environments during the recording of these things and that may have found its way into the songs, a feeling of wanting to be somewhere else.

Are you, or have you ever been religious? Hymns seem to be a big influence on your music…

Speaking for myself, I’ve never been religious. I think hymns and semi-religious music like Judee Sill or Trees Community are amazing in that the devotion of the singer is so powerful when they’re addressing some higher power and it’s not just a love song. I guess we wanted our singing to have that same spirit.

Do you agree that you’ll be seen as a godsend by old My Morning Jacket fans?

We’re not nearly as rock’n’roll as that band. I hope people listen to us for what we are – sorry about the reverb.