Singing sisters' major-label debut is a glittering folk-pop tapestry of Scandi-angst... When they first started releasing music six years ago, teenage Swedish sisters Klara and Johanna Söderberg named their band in acknowledgement of the healing power of song. On their third album the pair sound in need of a dose of their own medicine. The emotions driving these ten tracks are as troubled and uncertain as the music is gloriously resolved. 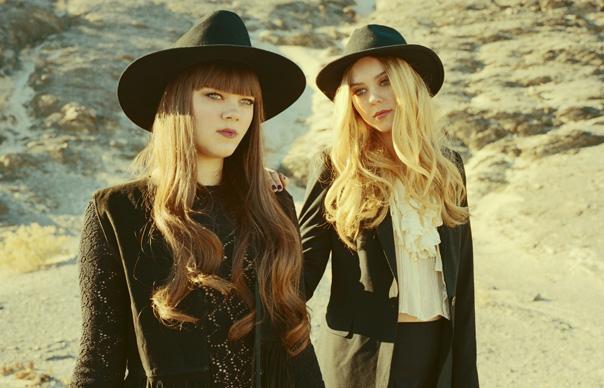 When they first started releasing music six years ago, teenage Swedish sisters Klara and Johanna Söderberg named their band in acknowledgement of the healing power of song. On their third album the pair sound in need of a dose of their own medicine. The emotions driving these ten tracks are as troubled and uncertain as the music is gloriously resolved.

There has always been a underlay of Scandi-angst to First Aid Kit’s otherwise unfailingly accessible take on past and present Americana. It’s got a lot to do with their vaulting sibling harmonies, so redolent of The Carter Family, The Louven Brothers and the Everlys in the way in which they simultaneously convey a spine-tingling mixture of joy and heartbreak. Melancholia is also an integral ingredient in many of their most obvious musical influences. The pair first emerged in 2008 when their cover of Fleet Foxes’ “Tiger Mountain Peasant Song” became a YouTube hit. On stage they’ve covered Gram Parsons’ “Still Feeling Blue”, while the pointedly titled “Emmylou”, from their second album, 2012’s The Lion’s Roar, name-checks Parsons alongside Johnny Cash and June Carter.

On Stay Gold, their major label debut, these core inspirations remain tangible, but the net is cast wider. “My Silver Lining”, a galloping Death Valley lament in a malevolent minor key, sounds like Cash’s take on “Ghost Riders (In The Sky”) filtered through Lee Hazelwood’s “Some Velvet Morning”. “Waitress Song”’s mix of crystalline vocals, violin and keening pedal steel recalls Neko Case’s “I Wish I Was The Moon” from her 2002 album Blacklisted. On “Cedar Lane”, a shifty waltz with a bad case of the motel blues, the mix of sobering country music borne aloft by flutes and strings brings to mind Townes Van Zandt’s 1969 album Our Mother The Mountain.

Elsewhere there are other, perhaps more surprising echoes. The pounding tribal chorus of “Stay Gold” has more than a hint of vintage Eurovision about it, while the beautiful “Shattered & Hollow” pulses powerfully, like a forlorn, backwoods version of The Ronettes’ “Be My Baby”.

The duo’s skill lies in their ability to weave these strands into a golden folk-pop tapestry of consistent loveliness, even if the results are hardly ground-breaking. First Aid Kit made their great leap forward when they moved from the spare acoustic renderings of their 2010 debut, The Big Black And The Blue, to the more fully-fleshed sound of The Lion’s Roar. As a next step, Stay Gold is part confident consolidation, part logical progression. Like its predecessor, it was recorded in Omaha with Bright Eyes’ producer/instrumentalist Mike Mogis, but while the general creative approach is similar, the arrangements are markedly more ambitious. The marquee harmonies and indie-folk textures remain, but it’s Nate Walcott’s inventive use of viola, cello, flute, mellotron and clarinet, performed by members of the Omaha Symphony Orchestra, which dominates.

Among all this crafted tastefulness, the breathless train-track rattle of “Heaven Knows” provides a welcome carefree kick, a lip-smacking kiss-off to some hapless fellow who has “spent a year staring into a mirror”. If Stay Gold at times seems almost too poised and pretty, then the words drag the listener back to the messy heart of the matter. Now 21 and 23 respectively, Klara and Johanna have moved away from the precocious observational narratives of early songs like “Tangerine” into what feels like nakedly autobiographical terrain. The songs return again and again to the dislocated sensation of being in constant motion and a long way from home. On “Master Pretender”, “shit gets fucked up and people just disappear,” while the rousing “Waitress Song” imagines a simpler life away from this “dark, twisted road.”

The prevailing sense of regret, stoicism and hard-won wisdom is captured best on “Shattered & Hollow”, which concludes: “I’d rather be broken than empty, rather be striving than settled.” Embracing experience in all its prickly incarnations might make for a tricky life but – on this evidence – the pay-off is the creation of ever more beautiful and emotionally engaging music.
Graeme Thomson

Q&A
KLARA & JOHANNA SÖDERBERG
Has signing to Sony changed anything about how you work?
KLARA: Not at all. We had the album finished before we even knew who the label was going to be. We made the record we wanted, and then found a home for it.

It feels like a logical continuation of The Lion’s Roar.
JOHANNA: With that record we felt we’d found our home sonically and lyrically, so we wanted to establish what we’d already done, instead of doing something completely new.
KLARA: We did try new things. The strings and arrangements move us into new territory. We’re a four-piece band on stage, but we felt that shouldn’t dictate how this record sounds. If the songs wanted to be big, let them be big! On “Waitress Song” and “Stay Gold” we really wanted something epic from the get-go.

There’s a recurring theme of travel and dislocation, and yet resolving to keep on keeping on.
KLARA: It’s not something we planned. We wrote these songs about what we’ve been going through – being away from people we love and going on great adventures, but hopefully anyone can relate to it. It’s not an “on tour” record, it’s about feeling lost in any sort of way. We’re very emotional people, and we deal with our sadness by writing about it. That’s really the whole idea behind our band.
INTERVIEW: GRAEME THOMSON