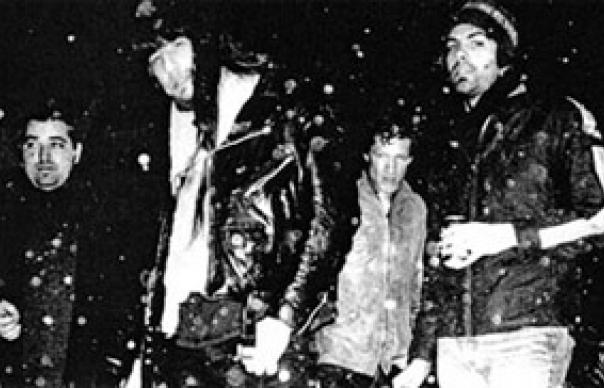 Imagine Kraftwerk’s “Autobahn” rescored for monster trucks, and you’re a little bit of the way to grasping the appeal of Endless Boogie’s first album. Four music-industry guys of a certain age from New York, the Boogie (as one feels compelled to call them) might act dumb, but they’re smart enough to understand the affinities between the fastidious, linear motorik of ‘70s Germany, and some of their looser, jamming contemporaries in North America and Australia.

Consequently, Focus Level finds them selecting a bare minimum of riffs and rigorously sticking with them for a very long time indeed. They chug, they choogle, they jam in a ruthlessly tight sort of way, and they’re going to terrify the hell out of anyone who finds Southern boogie a tad recherché. There are times, in fact, when you could almost suspect Endless Boogie were some ironic in-joke for Stephen Malkmus’ extended circle of friends: songs called “The Manly Vibe” and “Gimme The Awesome”; a frontman called Paul “Top Dollar” Major, whose singing chiefly consists of a series of scrofulous, good-ol’-boy hiccups indebted to Captain Beefheart at his most mannered and obtuse.

But for those of us who love AC/DC and their Aussie bootboy cousins Coloured Balls, who appreciate the first few ZZ Top albums, and who are gingerly considering a re-evaluation of Status Quo, Endless Boogie aren’t some southern-fried guilty pleasure, they’re a straightforwardly exhilarating rock’n’roll band. Apparently, Major is a dealer in rare records, so there are doubtless more obscure antecedents behind these ten superb tracks.

Still, as the opening “Smoking Figs In The Yard” proves, he clearly understands that Malcolm Young and military discipline are the most important elements of AC/DC. He grasps that a record like this is obliged to have a Canned Heat tribute: it’s called “Jammin’ With Top Dollar”, sweetly, and it betrays a deep working knowledge of “Spirit In The Sky”, too. And he knows the blues – the bandname comes from an old John Lee Hooker album, incidentally – can be stretched out as far as the event horizon, and can flourish when there’s not much of a song structure to contain them. Focus Level lasts for all of 79 minutes, but it could happily go on forever.