When The King met Mr President 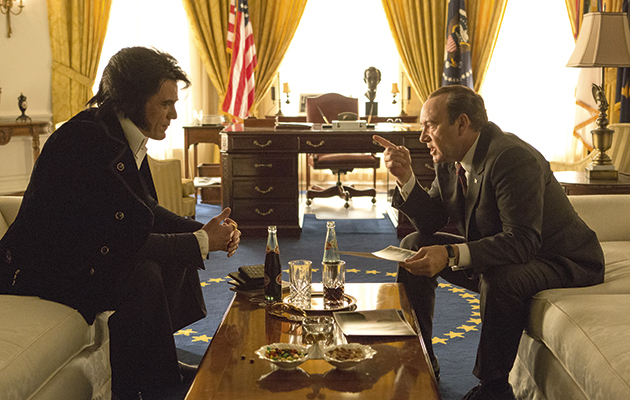 On December 21, 1970, an unexpected meeting took place in the Oval Office of the White House. At Elvis Presley’s request, he was granted an audience with Richard Nixon where he asked the President for a badge from the Bureau of Narcotics and Dangerous Drugs. This fabled summit is the subject of director Liza Johnson’s slight, but delightful, film.

The truth is so remarkable Johnson – and the screenwriters, who including Cary Elwes – have to resort to very little fictionalization. No longer the megastar he once was, threatened by The Beatles and the Woodstock generation, Presley wants to volunteer as an undercover agent. The Beatles, he says, are “anti-American, possibly with Communist leanings.” As he explains to the President, “If I can have a narcotics badge, I could protect this nation from sliding into anarchy.” His plan is to infiltrate the immoral arbiters of the Age of Aquarius: “The Rolling Stones, the Grateful Dead or possibly the Black Panthers.” After all, “I have a military background and I have a deep, abiding interest in law enforcement.”

To bring this momentous meeting to life, Johnson is blessed with two strong performances from Michael Shannon as Presley and Kevin Spacey as Nixon. Shannon underplays Presley – it works well. Despite the film being very funny, Shannon brings an understated pathos to the part. “When I walk into a room, everyone remembers their first kiss watching one of my movies, but they never see me,” he says. “He’s buried under gold and money. I don’t know if I know who he is anymore.”

Spacey similarly pushes Nixon away from revue sketch parody into something more nuanced. Around them, orbit a strong supporting cast – Alex Pettyfer as Jerry Schilling and Johnny Knoxville as Sonny West, members of Presley’s Memphis Mafia, and Colin Hanks as White House staffer Egil Krogh. But the main event between Shannon and Spacey sparkles.