Ella Fitzgerald – 100 Songs For A Centennial

Celebrating a century of the First Lady of Song 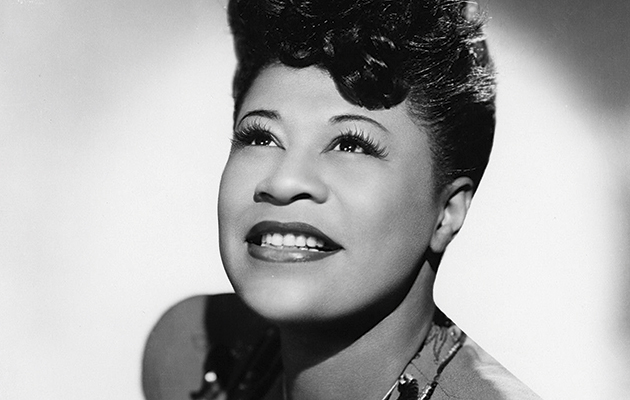 In a career that spanned most of the twentieth century, Ella Fitzgerald sold more than 40 million records, helped to define the American Songbook, became the first African-American woman to win a Grammy, and sang with almost all of her peers. And yet, twenty years after her death, she remains a strangely under-appreciated jazz singer, perhaps because she lacks the Rat Pack mythology of Frank Sinatra and the romanticized miseries of Billie Holiday.

Or, perhaps it’s simply because she sounds so happy. Her vocal tone is bright and clear, her phrasing so fluid and breezy that the songs become playgrounds, but that ebullience of voice should not suggest a lack of depth or a dearth of soul. Fitzgerald can sound melancholy, even lonely, but there’s always a hardy optimism lurking in even her slowest, bleakest tune—as though she knows the next tune will be a happy one.

100 Songs For A Centennial, a 4xCD retrospective chronicles the first two major chapters in her career, starting with Fitzgerald’s tenure at Decca and then with her even more impressive run at Verve. While not a comprehensive overview of her life and career, this box set provides apt context for a series of releases commemorating her 100th birthday.

Born in Virginia but raised in New York—where one of her first jobs was lookout for a brothel—Fitzgerald willed her career into existence, first by winning a talent show at the Apollo and then signing with Chick Webb’s orchestra, all while still a teenager. Her early hits were largely novelty tunes, including her immensely popular “A Tisket, A Tasket” in 1938. Like Sinatra, however, she gracefully weathered the change from singles to albums in the 1950s, understanding that the new format allowed her to make bigger and more complex statements.

At Verve she undertook one of the most significant endeavors in the history of recorded music: a series of albums exploring the catalogs of such songwriters as Cole Porter, Rodgers & Hart, Duke Ellington and George & Ira Gershwin. 100 Songs ends with Fitzgerald in her early forties, around the time she was enjoying her last smash hit, “Mack the Knife,” but even as the pop landscape made less room for her brand of pop music, the blithe excitement of her vocals never waned.

In the twentieth century and even in the twenty-first, there’s something incredibly compelling and even poignant about cheeriness of her interpretations. In the face of oppression within the jazz scene and without—she was dismissed for being too black, for being a woman, for not being traditionally beautiful and desirable—Fitzgerald met the world with what might be considered a radical happiness, which is the animating force on 100 Songs for a Centennial.