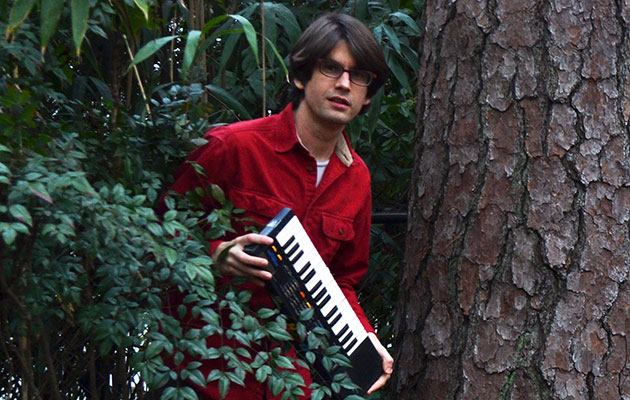 The first thing you hear, on a track called “Surf A”, sounds like the sea, where everything comes from, our watery genesis. Waves appear to crash on a beach somewhere. Seagulls squawk in circling overhead flight. It’s like a field recording from the beginning of time, or thereabouts. But the noise you’re listening to is made by a homemade synthesiser called The Mutant, a contraption likely built by a boffin with electrified hair and an obsession with obsolete technologies. Whatever, you are soon beguiled by the rhythm of surf hitting sand and its sucking retreat, even as it goes on longer than a typical Ramones song. Then a voice eventually appears, superimposed on the tidal splash and bird caw behind it. The singer is describing all the ways he’d change the world, if only he was someone else. It’s the same speculative construct effectively deployed on earlier Elephant Micah songs like “If I Wore Wigs” and “If I Were A Surfer” that imagined the promise of assuming new identities, the possibility of becoming someone or something else. Which, of course, begs the question: who or exactly what is Elephant Micah?

Joseph O’Connell’s been putting out records of idiosyncratic Americana and avant-folk since Low Energy Dance Music in 2002, mostly on small labels, sometimes self-released. This is something like his 16th album. He was born in rural Kentucky and grew up in Louisville before moving to Indiana, where he has a day job as a folklorist and freelance ethnographer, recording when he has the time, inclination and inspiration. It’s probably a nice way to live if not make an actual living as a musician. Hiss Golden Messenger’s MC Taylor, introducing his rather more obscure friend to Uncut around the time of Elephant Micah’s 2012 album, Louder Than Thou, referred in passing to the influence of Richard and Linda Thompson and John Martyn on O’Connell’s music, which seemed plausible enough. Across most of his albums, you may also hear something of Mark Kozelek, Arthur Russell, Jason Molina, Sam Beam, any number of usually be-whiskered men making melancholy music in shacks, log cabins, wigwams or whatever. The deep mournfulness of some tracks would therefore appeal also to fans of David Corley and John Murry. O’Connell’s greatest musical kinship, however, is probably with Will Oldham. They have very similar voices – frail, hesitant, slightly askew, vulnerable but exclamatory – and the influence of records like I See A Darkness and Master And Servant is often conspicuous.

The wryly named Genericana – the title has something to do with genre and genealogy and how they bind a culture together, apparently – blows O’Connell further than ever from the mainstream he’s sometimes tacked recently towards. The fractured country rock and splintery folk of records like Louder Than Thou, 2013’s Globe Rush Progressions and 2015’s Where In Our Woods is here dramatically abandoned. The sound is often reduced to not much more than O’Connell’s voice, the drones, yawns and sonorous sonic shifts provided by The Mutant and the kind of pounding drums you might hear at the funeral of a Pharaoh. Elvis Costello has probably written songs with more words in the first couple of lines than you’ll hear on the whole of Genericana. O’Connell writes with such piercing brevity, these songs are the equivalent of a kind of shorthand haiku. Looking for a chorus in any of them, you may not even find what usually passes for a verse. It’s a dramatically stark but luminous sound and the difference between this album and the several it follows is similarly the difference between Nico’s Chelsea Girl and The Marble Index or Tim Buckley’s Blue Afternoon and Lorca. Records in other words that similarly were so stubbornly singular they couldn’t easily be compared to anything else. Parts of the album make you think especially of “Lorca”, the 10-minute track that marked at the time such a departure for Buckley, but stripped of everything but Tim’s voice and John Balkin’s upright bass and pump organ. On The Marble Index, Nico’s glacially fatalistic voice was projected onto a series of astonishing arrangements played by a multi-tracked John Cale that owed more to modern European classical traditions than anything that in 1968 was happening in pop, folk or rock. In its own ways, Genericana is often as daunting, O’Connell’s voice, sometimes disturbingly double and treble-tracked, given such prominence in the mix it sometimes seems to be a computer generated effect, almost alien.

For such an apparently minimalist record, Genericana is nevertheless full of unexpected associations, surprising echoes and evocations. The final death-pulse of “Surf A” has barely faded before “Fire A” starts with an instrumental passage that recalls something from Ry Cooder’s portfolio of dustbowl ballads. The song then turns into an elegant lament, a dissolving hymn with stately gospel roots. The brief “Life A” follows on a mudslide of guitars, not quite the remorseless grind of Dylan Carlson but still as intense as Lou Reed on “The Blue Mask”. The most striking thing about the track, though, is how much O’Connell sounds like Townes Van Zandt, another unexpected juxtaposition.

“Life B”, meanwhile, reprises a song called “Still Life Blues” from 2010’s Echoers Intent. Up to a point, it occupies the same sensuous vacuum as Fleetwood Mac’s “Albatross”, that spacey loneliness. The guitar part is like something walking across space, one star to another, a series of luminous notes, bright as pearls against a sublateral darkness, the prevailing cosmic murk. O’Connell’s voice eventually replaces the guitars as the track’s focus, his vocals a warm halogen glow, all shrillness denuded, utterly gorgeous before the track is reduced to tom-tom beats and tape hiss. “Fire B”, meanwhile, is introduced by what sounds like a six-year-old trying to master the opening to “Baba O’Reilly” on the cheapest synthesiser in the shop, some Amstrad-era monstrosity. A cluster of repeated notes, drones, a needling noise, prefaces the return of breaking waves, various hammerings, what sounds like a string quartet playing the refrain from Lou’s “Street Hassle”, O’Connell again promising to reshape everything, conditional on being someone he’s not, including in this instance a hunter and a Quaker.

Finally, “Surf B” opens with a drumbeat that’s equivalent to a man hammering sand down a rat hole and the same oppressive guitars as “Life A”, a nauseous churn. “If I were a thinker, I’d occupy my mind,” O’Connell sings. “Take a view of something and assess its meaning.” There’s a deadpan nihilism to this that again evokes Van Zandt, especially now that O’Connell sounds like someone barely clinging onto life. “We’ll start all over again,” he sings, over a sudden cacophony, revisiting a line from “If I Were A Surfer”. “Let it turn into dust,” he goes on, his voice forlorn, accepting, bereft. “It’s gone,” he’s singing now, “whatever it was.”  You’re almost relieved when his voice is washed away by what again sounds like breaking waves, as if the album is taking us back to the beach where all this started and now apparently ends. You keep waiting for the seagulls to make their somehow reassuring return, wheeling above the desolate scene. But the birds like everything else, by now are gone, baby, gone.