EL VY – Return To The Moon 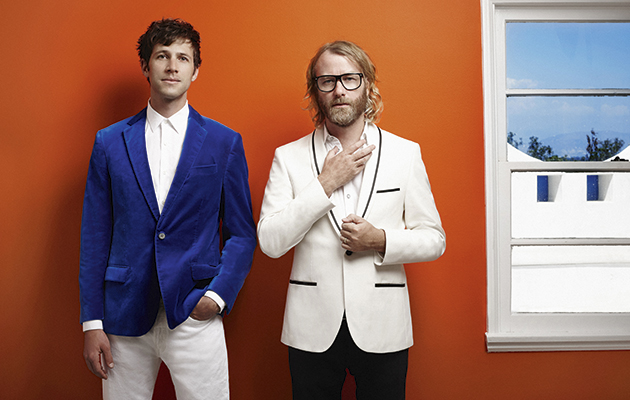 Sixteen years in, The National remain together because they effectively split between records in order to pursue diverse peripatetic activities. In particular, guitarists Aaron and Bryce Dessner have the indie-rock and classical worlds licked, their reputations inviting collaborations with acts as diverse as Mumford & Sons and the Kronos Quartet. There have been outlandish collaborations with visual artists, an acclaimed documentary, comedy cameos; they’ll release an all-star Grateful Dead tribute compilation featuring Bob Weir before the next National record, their seventh.

Frontman Matt Berninger figures the least in these side-projects. A classic words-only man à la Michael Stipe, he plays no instruments, and writes to music rather than filling journals with potential lyrics. He makes an unlikely collaborator, not least because his iconic croon would only dominate new company; at any rate, his insularity helps make him a captivating leading man. But in ex-Menomena multi-instrumentalist Brent Knopf, Berninger found a challenge to get out of context. The pair met when The National played with Menomena back in 2003. Years later, Berninger asked the prolific Knopf, now leading solo project Ramona Falls, to share some sketches for him to write to.

This casual arrangement is evident in their debut as EL VY (pronounced el-vie, as in the plural of Elvis), which captures Berninger’s seldom-seen playful side. He killed off his louche bachelor past on 2005’s Alligator, where he charmed women by dancing on tables, “cock in hand” (“Karen”), and smothered anxiety in bravado on “Mr November”. EL VY’s “I’m The Man To Be” seems to synthesise those two songs exactly, but from the perspective of a washed-up rock star rattling around his hotel room rather than an aspiring one. Atop bursts of clenched guitar, Berninger breaks out of his usual forlorn voice to affect a sleazy drawl on the memorable chorus: “I’m peaceful cos my dick’s in sunlight held up by kites/Cos I’m the man to be.” The parody doesn’t quite work – it’s hooked around brand names (the pathetic figure drinks offensively expensive shampoo and wipes his tears with a designer tie) rather than emotion and self-awareness, as was High Violet’s “Sorrow”, and feels a little insincere for it.

What rings true is the sense of imposter syndrome. In the Mistaken For Strangers documentary, Tom Berninger described his older brother as “a rock star – and he always has been”. But a lifelong sense of fraudulence emerges on Return To The Moon, where 42-year-old Berninger leaps back quarter of a decade to consider his anxious teenage years in Cincinnati, Ohio. On the glimmering, tumbling “Paul Is Alive”, he finds himself crying into his lemonade outside a punk club, listening to Hüsker Dü through the walls. “Need A Friend” is tougher, all flinching groove and suspicious stabs of piano, evoking the encroach of a panic attack in the club’s toilets. By the end of the song he’s repeatedly screaming “this is heartbreaking”, that sense of frustration bristling close to the surface of his skin.

Return To The Moon could do with more of these visceral lyrical moments to differentiate it from Berninger’s day job. There’s plenty of magnetic imagery: “I imagine myself being cool in the backseat of your car,” he sings on the breezy title track. “Silent Ivy Hotel” finds him hiding out on another bathroom floor drinking “pool water martinis” in the kind of weird sanctuary he evokes so well. The majority of the other songs mine familiar territory: alienation, ineffable pain, desperation for comfort. Once or twice, Berninger’s usual knack for oblique poetry starts to sound like someone impersonating him; like the title track’s “Bought a saltwater fish from a colourblind witch ‘cos she said she loved it.”

If you’re familiar with Menomena‘s knotted guitar and high piano melodies, then Knopf’s presence offers few surprises. There are some outliers: “No Time To Crank The Sun” and “It’s A Game” are tender piano devotionals, but they’re followed by the two nastiest and best songs on the record, where Knopf and Berninger’s violent sensibilities collide well. The brittle, stuttering “Sad Case” has an almost industrial thwack to the chorus, and a reeling outro that sequences so sharply into “Happiness, Missouri” that the latter sounds like an equally intense extension rather than a new song. Return To The Moon is fully realised and offers plenty of intrigue, but the moments like this final one-two are sadly lacking: rarely do they sound like a unit, and surprisingly, Berninger is the one that ends up sounding a little lost.

Q&A
MATT BERNINGER
Was the record made remotely?
95 per cent of it, which is not unlike the way I’ve been working for a while – even The National’s last record I did all my vocals out here in LA.

You’ve said it’s your most personal record.
It has the most autobiographical foundation to it. It’s the most I’ve dug into my past. One of the perspectives is of a Cincinnati teenager who’s falling in love with music and maybe a person – they’re falling in love together through music.

Why reflect on your teenage years?
I’ve been listening to a lot of old stuff from the ’80s – punk, the Minutemen – that took me back there. There are a lot of Minutemen references on this record: their documentary We Jam Econo was an inspiration, mostly because of how music was the glue of the friendship between those three guys. It gave me some perspective on the fact that music was my salvation or basis of identity as a teenager, adolescent, and as a young man – my whole life.

Will this record affect the way you write for The National?
Brent and I were almost never in a room together, the whole writing of this record; The National – we’re trying to do totally the opposite. We were all together at Aaron’s house a few months ago, and now they’re coming out to LA in a couple of weeks. We’re going to camp out in a studio and write together in a room. It’s already been working really well.
INTERVIEW: LAURA SNAPES