Eagles Of Death Metal – Heart On 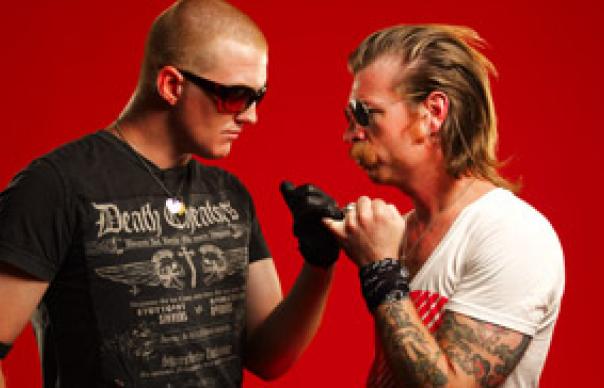 Itself a work of classic rock ‘n’ roll, the new album by Eagles of Death Metal inevitably calls to mind the work of some classic rock ‘n’ roll bands: The Rolling Stones, The Jon Spencer Blues Explosion, and also drummer/guitarist/producer Josh Homme’s other band, Queens Of The Stone Age. More interestingly, perhaps, and a thought probably not problematic to the album’s lusty creators, Homme and singer/guitarist Jesse Hughes, it also makes you think of Dolly Parton. Chiefly, of the singer’s famous assertion on cosmetic surgery: “It takes a lot of money to look this cheap.”

In the hands of the Eagles of Death Metal – a project that has now, with Heart On reached an unthinkable degree of accomplishment, its third album – there’s a similar kind of oxymoron at work. Rather than looking expensive or sounding cheap, however, the working principle with this band would appear to be “You have to be pretty clever to sound this stupid.”

Heart On is the fullest vindication yet of an unpromising operating procedure. A band seemingly started with light-hearted aims – main man Jesse “The Devil” Hughes had not picked up a guitar prior to writing the songs for the band’s first album; this for a long time seemed to be just one among Josh Homme’s many side-projects – the band’s ethos seemed disarmingly simple. Here were two self-proclaimed sexy gentlemen, on a mission to make good time music. So far in their career, however, while one might have had opportunity to admire the talk, one may not, however, have properly observed the walk.

Obviously, it would be a foolish person who seized on the uncomplicated punning of Heart On and song titles like “Thought I Couldn’t Dance (Tight Pants)” (incidentally, a cousin of the Jon Spencer Blues Explosion’s “Bell Bottoms”), and claimed that this was a record on which the pair had turned a new and serious corner in their work. Throughout this extremely enjoyable record, however, it’s more straightforward than ever to see this music as being successful on its own terms, even to those maybe not cognizant of (or even interested in) the group’s self-referential backstory.

It’s true, the band’s take on, say, the compositions of the 1970s Rolling Stones (opening track “Anything ‘Cept The Truth” and “Cheap Thrills” have the riffs; “Now I’m A Fool” duplicates some of that band’s exquisite millionaire langour) are undertaken with an occasionally knowing wink. But this isn’t, by a long chalk, irony served cold. Much as LCD Soundsystem have done in the dance/rock field, Eagles are doing for rock: bringing, along with the smile of recognition, a huge genuine love for the source material. It’s hard to think of a better vindication for their working methods than the effect that the band had on Axl Rose. After referring to them from the stage as “the Pigeons Of Shit Metal”, he threw them off the 2006 Guns N’ Roses tour after a single show.

Weirdly, though, both Rose and the Eagles are ultimately batting for the same team. Both would appear to be log cabin republicans (“I love my guns and my money, and I don’t want anyone taking them from me,” Hughes claimed in a recent interview). Both aim to appeal to the American heartland (puns notwithstanding, it’s this heart, apparently, from which Heart On takes its title). Maybe more significantly, both are nominally in the tradition of uncomplicated good time music, that’s best heard blasting from a bar or customised automobile. With one significant difference – the Eagles seem to still be having a good time making it.

Undoubtedly, though, and this is again a fact both Rose and Hughes can swear to, creating such music is not a process that comes without work. In the short but sweet single “Wannabe In LA”, Hughes claims he “Came to LA to make rock ‘n’ roll/Along the way I had to sell my soul…” But really, if this album testifies to anything, it’s that rock success is never achieved with so simple a transaction. Rather than a knockabout album, Heart On instead sounds meticulously worked over, the likes of “Prissy Prancin’” buffed by producer/engineer Homme (Queens affiliates Troy Van Leeuwen, Alain Johannes and Dave Catching are also all on board) to a devastating shine, while still punching their considerable weight.

All round, a party atmosphere prevails – and undoubtedly a good time is had by all. What it was much harder to have forseen, though, is how essential this finished article might become. Eagles Of Death Metal might have started as in-joke among friends, but theirs are the jokes of the best kind, built on a firm foundation of truth. Already, they’re laughing pretty loudly – could be that they laugh the longest, too.

You write the songs, Jesse – what does Josh bring to the party? It must take a lot of hard work to make it sound that easy, right?

I write the songs, sometimes they’re just coal – sometimes they’re unpolished diamonds. Josh brings the other half of the song – the manner in which to capture it. I bring the devil and he puts it into the bottle.

Can you tell me how EODM albums sessions work?
We show up in the studio and Joshua is the man man, the producer, the executive dog. I bring the songs, he brings the noise, and then he leaves the studio and I polish it up, then I leave the studio and he polishes it up some more. We set a production standard to make it the best it can be, and then we obey the music.

How important is it to try to connect with the American heartland with your music?

Like the American heartland, we’re not so pretentious as to believe we made anything up. We just want to follow in a tradition that’s good. We wear our hearts on our sleeves. And when I wear tight pants, you can notice my boner – that’s my killer riff.

You were ‘The Devil’, but now you’re ‘Boots Electric’. Is this simply a change of name, or of state of mind?
My mother is a devout southern Baptist and she cried when she saw the devil in my name. And have you seen me dance? My boots set the stage on fire!