Leftfield film from Poland has the makings of a cult success 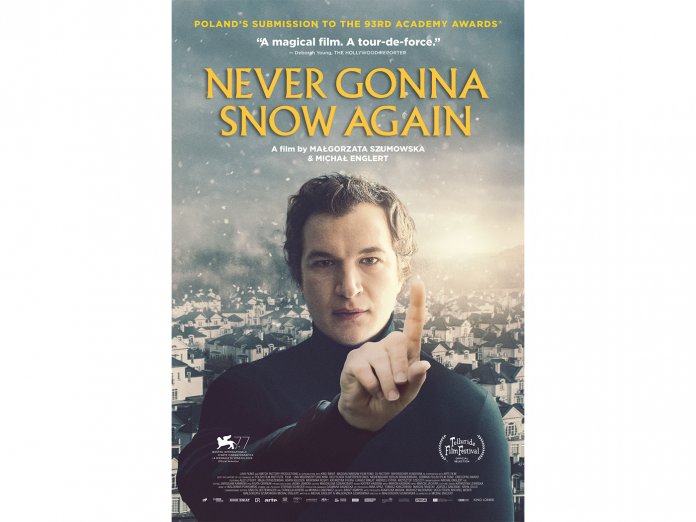 For several years, director Małgorzata Szumowska and cinematographer Michael Englert have been the most productive force in Polish cinema, with an unpredictable and cosmopolitan output ranging from Juliette Binoche drama Elles to recent US-set religious-cult drama The Other Lamb. Their latest, Never Gonna Snow Again, is among their most thoroughly Polish but may be the title that really marks their international breakthrough.

Alec Utgoff plays Zhenya, a young mystery man from the East – ominously near Chernobyl, in fact – who arrives at a Polish gated community to work as a masseur. He passes from household to household attending to the variously spoiled and disconsolate residents (including eco-conscious widow Ewa, played by Agata Kulesza, from Pawel Pawlikowkski’s Ida and Cold War). Everyone wants something different from the distant, gentle, oddly sexless Zhenya – absolution, calm, some kind of magic. But nuclear exposure seems to have left him with telekinetic powers, even made him an earthly angel of death.

What’s fascinating is how ambivalent the film remains throughout, sustaining a mood of hovering unease as it proceeds in deadpan fashion through its borderline-satirical vignettes – with brief eruptions of outright visual weirdness, like a show-stopping Halloween parade. Meanwhile, Utgoff – resembling a baby Patrick Swayze – has the sort of mysteriously absent presence that’s like a magnetic void at the film’s centre. Whether you view this as an eco-parable, a satire of an East that’s turned into a version of the bourgeois West, or a mystically tinged existential comedy about human need and folly, this elegantly executed number is Szumowska and Elgart’s most alluring film. Assuming the world is still open to the prospect of leftfield discoveries from Eastern Europe, this has the makings of a genuine cult success.