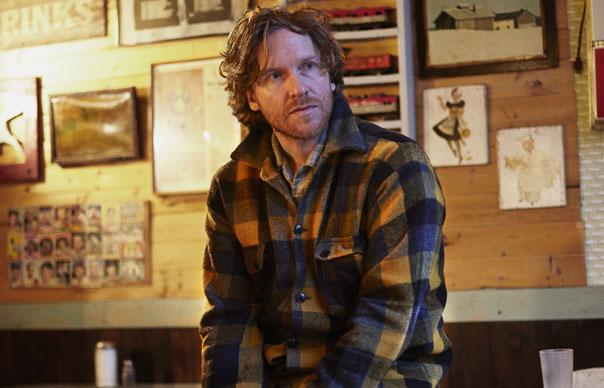 There’s something about Doug Paisley that defies categorisation. Generally, the Toronto-based singer is filed as a throwback to the singer-songwriters of the early 1970s, though the fact that his tunes arrive with a twang makes it tempting to see him as a country artist. On the evidence of his first two albums, you might place him to the left of James Taylor and Don Williams, on account of the easy smoothness of his sound. But he’s way more interesting than that.

What’s evident is that Paisley has embarked on a re-evaluation since his fine 2010 album, Constant Companion (characterised by friendly critics as sounding like a never-ending 1971). Since then there has been one release, the austere EP, Golden Embers (2012), in which Paisley’s acoustic guitar, a mandolin, and Leslie Feist, added muted backing to his characteristically careworn vocals.

If Golden Embers was a hat-tip to the bluegrass Paisley played for a decade as a member of a Stanley Brothers’ tribute act, Strong Feelings is more diverse. There is, at the end of “Where The Light Takes You”, a playful coda which could conceivably be termed “prog”; “Growing Souls” marries a church organ and a disorienting burst of Mellotron (the result sounds like The Beatles rehearsing in a Chapel of Rest). Then there is the bustling “To and Fro”, which dates from Paisley’s time as part of Dark Hand and Lamplight, in which he sang while visual artist Shary Boyle projected sympathetic images.

These variations are welcome, but Paisley’s real gift is neither generic, nor subversive. His band, which includes Emmett Kelly (ex-Cairo Gang, and a Will Oldham sideman), is limber. But Paisley is an unassuming character and, at its best, his music is waist-high in the mainstream. A song like “Old Times” has the parched quality of a Guy Clark lament, while the ballad “One Love” is soothing and supple, its sweet intimacies propelled by the resting heartbeat of Bazil Donovan’s bass.

Paisley can do the Nashville sound, but he isn’t a formulaic writer. Mostly, he edits, removing narrative clues until only emotion remains. The opener, “Radio Girl” has a lyric that is almost like a cut-up of country lyrics, yet the warmth of the melody takes it beyond pastiche. “It’s Not Too Late (To Say Goodbye”) is a conventional country weeper, with resonant guitar from Kelly.  And “Song My Love Can Sing” is a dreamily understated song about love and regret, with a gorgeous keyboard riff from The Band’s Garth Hudson.

Hudson is also at the centre of the album’s stand-out, “What’s Up Is Down”, a late night heartbreaker of the type Tom Waits and Crystal Gayle might have essayed in One From The Heart. Hudson plays “One For My Baby” piano on Glenn Gould’s old Steinway, while Paisley acts the wounded man, and (another unclassifiable Canadian) Mary Margaret O’Hara trills beautifully.

“What’s Up Is Down” is a perfect illustration of Paisley’s gift. It sounds timeless, and oddly familiar. But subsequent listens add intrigue. It’s a love song framed as a complaint, though the exact nature of the singer’s disquiet is hard to fathom. Perhaps it reveals a forbidden affair, or maybe a dishonest relationship. It could be read as a passive-aggressive farewell, a blue valentine, or a melancholy wallow. In truth, it’s all those things, yet the mood is calibrated so precisely that the lingering impression is of emotional uncertainty, a nervous flux in which love and hurt are locked in a bleary waltz.

Then there is the closer, “Because I Love You”, in which Paisley directly addresses the power of song, via the metaphor of love. Recorded in a few spare moments at the end of his session with O’Hara, it’s playful, joyous and sad. O’Hara improvises a whistling solo. “Songs can travel over walls, across great spaces, and through time,” Paisley croons. It’s crafted to the point of timelessness, as compelling as a dream.
Alastair McKay

Q&
How did you approach this album?
Foremost, I’m a guitar player, so my daily work is really just sitting at home and playing lots of guitar and songs come out of that. A lot of these songs took two or three years So you’re really just playing them hundreds and hundreds of times.  If you are interested enough in them, that’s what’s going to make you keep playing them. But also you just have to wear away everything that might be superfluous, or that you don’t like. Beyond that, when I work with musicians, particularly people like Garth Hudson or the other people on this album, I have so much confidence in what they do that there really isn’t any direction. So I guess I could say the backbone of what I’m doing is very deliberately laboured over, but when it comes time to record it with others, there’s a lot of spontaneity.

How did you find, Mary Margaret O’Hara? Isn’t she a recluse?
She’s actually quite active in Toronto. Her mythology is one hugely important album [Miss America] and then disappearing but she has been doing a lot of really interesting stuff all this time.  She’s a very funny person, a real character, but actually when we were working, she’s like any great musician you’d want to work with. She’s very quick and very creative.
INTERVIEW: ALASTAIR McKAY