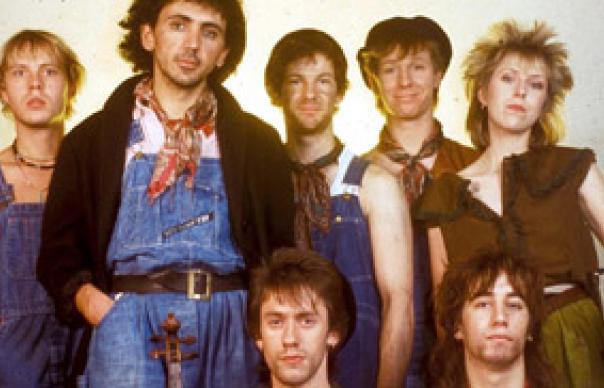 By the spring of 1982 Dexys Midnight Runners finally seemed to have gone off the rails. Following 1980’s number one, “Geno”, and the incendiary debut album, Searching for The Young Soul Rebels, a couple of relative flops saw a band revolt, an attempted coup and the eventual expulsion of five members.

In an unrelated development, founder member Kevin “Al” Archer departed more amicably to work on some sketchy ideas for his own string-driven things. Undeterred, Kevin Rowland forged a new Dexys, now recast as boxer-boys of soul, and, if anything, they burned with an even greater zeal – as captured on this year’s Projected Passion Revue collection.
But their commercial moment seemed to have passed, and further singles such as “Plan B” failed even to break the top 50. Towards the end of 1981, Rowland heard some of the demos Archer had been working on – featuring a young student fiddle player called Helen O’Hara – and the seeds of Dexys Mark Three had been planted. Word that Rowland intended to replace the brass section with strings inevitably filtered back to members of the band, and Big Jim Paterson and Brian Maurice promptly left.

Nevertheless, recruiting O’Hara, along with the Emerald Express strings, Rowland pressed on. The first fruit of the new soul vision, the “Celtic Soul Brothers”, was released with great expectations in March 1982 – and then fizzled out, ignominiously short of the top 40. “Our stock,” as Rowland says now, “was at an all-time low.”

That Dexys managed to recover from the kind of intrigues more common among feuding political factions than pop groups, and wound up recording one of the biggest selling albums of the year – as well as a single that seems to have transcended its time and place altogether – is one of the great miracles of early ’80s British pop.

Recording in the same studio where the Human League had just finished Dare, watching as ABC, The Associates and even OMD stormed Top of the Pops, Dexys had seemed a band out of time. But in some ways they were just as much a New Pop confection as any of their peers. Rowland would be the first to admit he owed as much to Roxy Music (his weird soul yelp is a descendant of Ferry’s) as he did to Van Morrison; and he understood instinctively that pop was less about plain music than epic theatre, a complete, minutely detailed vision – in this new incarnation, a raggle-taggle world of earnest, proselytising troubadors in threadbare dungarees.

He also did a fine line in meta-pop sloganeering. In the context of the album the stalling “Celtic Soul Brothers” is their Sgt Pepper-style introduction to the concept, with the band chanting “More please… and thank you” like modern day Olivers demanding an extra serving of the thin gruel of pop acclaim, reclaiming their pop stage from the vain pretenders.
The horns blare back in on the delirious “Let’s Make This Precious” – part call and response, part Catholic catechism: “But still we must forsake all to win / (All temptation?) / Everything! / (For salvation?) / Now you’re talking!”. In many ways, Too Ry Aye is one long pep talk, postponing its reckoning amid recriminations (“All in All”, “Liars A to E”), bad memories (“I’ll Show You”, “Old”), inspirational readings (the straight cover of Van’s “Jackie Wilson Said”) and ascetic affirmations (“I’m going to punish my body until I believe in my soul”).

The pay-off is the final track: “Come On Eileen”. Fascinatingly, producer Clive Langer now says that the song was originally called “James, Van and Me” – referring to James Brown, Van Morrison and, of course, Kevin Rowland. And you can imagine that song being a new version of “Geno” – a testament to the inspirational glory of soul, Kevin fixing himself in some new starry trinity.

You can only speculate as to what thunderbolt caused him to take a more secular tack, but by giving into earthly lusts (“my thoughts, I confess, verge on dirty”) and writing an indisputably classic love song, Kevin Rowland finally endeared himself to a mainstream pop audience, saved his band’s career, secured his pop immortality… and seemingly incurred a whole lifetime’s worth of guilt (partly in the belief that he had ripped off Kevin Archer).

“Eileen” was unstoppable: number one in the UK throughout the whole of August 1982, and then again in the US the following spring, ensuring that, after its shaky start, Too Rye Ay was a pop triumph. Yet 25 years later, as an album it feels distinctly patchy. The band sound caught in limbo: between the old disciplined zealotry of ’81 (having left before recording, the horn section were persuaded to return as session musicians, creating a some intensely awkward recordings), the commercial instincts of producers Langer and Winstanley (fresh from minting the music hall pop of Madness), and the new celtic soul vision of Rowland, caught in an infatuated anxiety of influence with Van Morrison, compelled to pursue success, but half-hating himself for doing so. Compare the band on the additional disc here, recorded live in Newcastle in the summer of 1982, with that on Projected Passion Revue and it’s like a Jesuit soul army have been replaced with by a gang of milksops and mercenaries.

Dexys purists are always going to prefer the albums either side: the earnestly questing ‘Searching…’ and the maverick yearning of ‘Don’t Stand Me Down’. But for one or two moments – “Eileen” and “Precious” – Too Rye Ay might convince you that Dexys were at their best when they were at their most impure – their most insecure, most lustful, most ambitious. For better or worse, on every jukebox, at every closing time, at every wedding reception, Kevin Rowland will sing this tune forever.