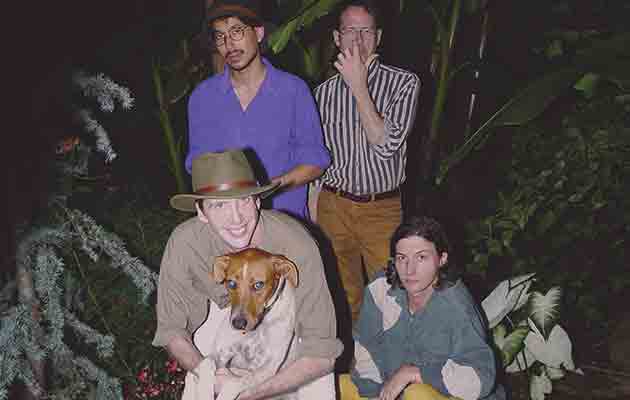 It’s hard not to hear a glimmer of gratitude in Bradford Cox’s voice as, not long into his band’s thrilling and unexpectedly affirmative seventh album, he sings, “I’m living my life, I’m living my life”. The idea that Deerhunter’s frontman has a stake in the here and now also seems to elicit a measure of surprise – he repeats the phrase as if he’s trying to convince himself that it’s true. Then again, a life-threatening encounter with a swiftly moving hunk of steel and glass is bound to make anyone consider their place in the world.

Though Cox has been reluctant to divulge specific details about the car accident that left him hospitalised last December, the effect has clearly been profound. As he put it bluntly in an Instagram message while waiting for X-rays, “Can’t move much. Incredible pain.” Given Cox’s long history of suffering due to Marfan syndrome, one can barely comprehend all that’s contained in those last two words.

Cox has said the accident “erased all illusions for me” and was subsequently treated for depression. Yet he also claims to be pleased about the antidepressants’ dampening effects on his libido and the “manic urge” that fueled the making of 2013’s Monomania, the band’s most abrasive disc to date.

Regardless of how much Cox owes his current disposition to pharmaceutical benefit, Fading Frontier bursts with a far different kind of energy than the darker sort of recent years. Cox has gone so far as to liken Fading Frontier to the first day of spring after a brutal winter. While matters are not necessarily so sunny throughout the album’s entirety, never before has Deerhunter’s brand of noise been such a joyful one.

Of all their releases in the last decade, Fading Frontier strikes the most satisfying balance between the menacing, mantric grooves of 2006’s Cryptograms and the pop melodicism that emerged on 2010’s Halcyon Digest. From the sideways funk of first single “Snakeskin”, the beatific vocal harmonies of “Breaker” or the synth-drenched Tangerine Dream-iness of “Ad Astra”, the stylistic detours here somehow keep sending them further into the light.

Recorded with Halcyon Digest producer Ben H Allen in Atlanta, the new album may partially owe its lowered anxiety levels to the comforts that go with working close to home. And whereas the line between Cox’s Deerhunter activities and his solo endeavours as Atlas Sound has been blurry at times, Fading Frontier sounds very much like a group effort. Cox’s powerful presence is well-balanced by equally strong contributions by his Deerhunter co-founders, guitarist and keyboardist Lockett Pundt and drummer Moses Archuleta. (Officially enlisted in early 2013, Josh McKay returns on bass.) Indeed, “Breaker” is the first recording in which Cox and Pundt share lead vocals, a strategy that lends a Byrds-ian prettiness to the hazy but propulsive dream-pop template that prevails on Fading Frontier. With former Stereolab leader Tim Gane dropping by to add a Left Banke-like dusting of electric harpsichord, “Duplex Planet” is just as fetching. Broadcast’s James Cargill also makes a guest appearance to add tape manipulations and yet another layer of synthesiser gloss to “Take Care”, a hypnotic ballad that sounds custom-built for a night-time driving scene in a moody ’80s crime thriller.

Fading Frontier’s similarly cinematic centrepiece, “Leather And Wood” demonstrates the album’s richness in regards to texture and detail. Glitch-y bleeps, choppy beats and other discordant elements underpin a plaintive piano part and Cox’s eerie, treated vocal. “I believe we can die, I believe we can live again,” he croons, as matters of mortality again hijack his stream of thoughts.

And despite Cox’s claims about the benefits of living libido-free, there’s no lack of swagger in “Snakeskin”. Though this burst of bravura may contrast sharply with Fading Frontier’s more placid songs, it highlights the clarity of purpose and offhand sensuality shared by all of the songs here. The anger and anguish so prevalent in Monomania have been replaced by a greater sense of ease on Cox’s part.

That’s true even when he sings of a lover’s departure in the closing “Carrion”. Never one to miss an opportunity for wordplay, Cox delights in the confusion he creates as to whether he’s singing the unpleasant word in the title or imploring that special someone to “carry on”. Either way, the pun is perfectly suited to a work that could have been mired in despondency but is instead rife with a lust for life and an eagerness to engage with the moments at hand. As Cox sings in the final track, “I will stay strong, I will stay strong.” Fading Frontier leaves no doubt that he and Deerhunter have done just that.

Q&A
Bradford Cox
What kind of effect did the car accident and your recovery have on the making of Fading Frontier?
Any time you have something unexpected like that come along out of nowhere and knock you on your ass, you find a lot of time to re-evaluate your priorities. I had a broken pelvis and was bed-ridden. I had lots of time to catch up on reading and listening to piles of music I had collected to explore. There was a lot of worry that I would suffer long-term consequences, and I am very blessed that that was not the case. A lot of the time in bed was spent worrying about that. I found organising and arranging songs for the record to be a good distraction from the physical pain and discomfort.

You’ve been saying that Fading Frontier is your favourite of Deerhunter’s albums – what do you think you’ve achieved here?
Well, if you ask any musician, artist, writer, filmmaker or what have you to choose their favourite work, it would almost always be the most recent. As I have gotten older, I’ve become less self-critical about our early work. I’ve come to appreciate it for what it was and what we made given the circumstances and resources we had at our disposal. We had a lot of resources at our disposal for Monomania but decided to record in a very backwards and primitive way, bypassing a lot of that. This is the first album where I don’t think we made any sacrifices in sonic quality. Everything is either how I imagined it should be or better.

The band may have also attained the best balance between its experimental bent and its more melodic sensibility – is it always hard not to tip too far one way or the other?
I have always wanted to make music that could affect people and entertain them and engage them. I like to think of artists like Björk and Radiohead, and how in their best work, they never avoid the strange if it leads to moments of beauty. They have a wide appeal because they draw you in with something familiar and you trust them to take you somewhere that would otherwise be a little dissonant or uncomfortable. I find that inspiring.
INTERVIEW: JASON ANDERSON