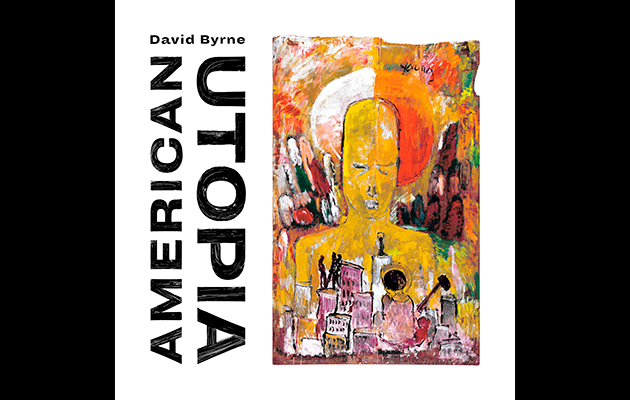 Listen to “Don’t Worry About the Government” from Talking Heads‘ 1977 debut album and you could take it as a straight homage to Jonathan Richman: “I smell the pine trees and the peaches in the woods / I see the pinecones that fall by the highway”. It’s only gradually that the pastoral takes on sinister overtones: “I see the states, across this big nation / I see the laws made in Washington, D.C / I think of the ones I consider my favorites / I think of the people that are working for me”. It dawns on you that Byrne is singing from the perspective of the President, or even Government itself, as a kind of anonymous, cybernetic Greek chorus. “Don’t you worry about me,” it lulls its anxious citizens, like HAL 9000 in 2001 “I wouldn’t worry about me.”

The song established a signature tone of creepy naivety that has persisted through Byrne’s work, from the ecstatic dread of “Once in a Lifetime”, through the giddy doom of “Road to Nowhere”, right up to the title track of the 2008 Brian Eno collaboration Everything That Happens… It’s a tone that’s all over American Utopia, which considers the state of the union with a surreal impassiveness. It reaches its apogee on “Dog’s Mind”. It begins with portentous piano chords before building to a gospel chorus sung by Government clerks, gazing out upon “a place where nothing matters / Where the wheels of progress turn / Where reality is fiction / But the dogs show no concern”. Is this where the grand experiment of America winds up, wonders the album – with the citizens adrift in doggy dreams, the judiciary hungover, the media quiescent, while the Presidential fiasco proceeds unchecked?

These are good questions for a great American artist like David Byrne to be pondering, but I’m not sure American Utopia adds up to a great piece of work. It is at some level, like Everything That Happens… That album had a dated feel, but there was a great charm in hearing the massed Enoid choir once again supporting Byrne’s quizzical lead. This time around the tracks are based on drum tracks that Eno programmed, but he takes a back seat. It makes you wonder whether Byrne needs more active, engaged collaborators (like the other Talking Heads, Eno, or St Vincent) to really provoke him to greatness.

Left to his own devices, Byrne comes home to a screwball hymnal mode that for all the lyrical left turns, feels a little too predictable. The album begins with the twinkly chords of “I Dance Like This”, an uncanny Philip K Dick vision of the day after the end of the world: “ a fitness consultant / in the negative zone / wandering the city / looking for home”. The chorus is a jarring intrusion, like the song is being given ECT, but it feels arbitrary, the result of an algorithmic decision, rather than anything dramatically disturbed.

“Gasoline and Dirty Streets” is better, entering with synthetic sitar and slapback bass, backed with eerie saxophone and harmonica, one of a number of tracks recalling Talking Heads at their most polished circa “Sax and Violins”. It describes a battle between a woman “who is royalty” (for whom “freedom costs too much”) and “a man who would be king”. Like much of the album it feels overdetermined by recent American politics. At its worst, on “Every Day is a Miracle”, this leads to childlike, slightly pious fables which, which like the political squibs of George Saunders, feel like collaborations between Dr Seuss and Kafka.

If you don’t much care for green eggs and ham, the two sides of the album end with a couple of the best songs of Byrne’s storied career. “This is that” is a yearning tribute to the power of music, sung over synthetic chinese zither, which aquiesces to the clichés we use to describe “that moment when the melody ends and the rhythm kicks in”: “that’s when I call you up, that’s when my river overflows” Byrne sings, falling back, unapologetically, on old soul tropes of transcendence.

The final “Here” is the one track credited to Byrne and Daniel Lopatin, better known as electronic auteur Oneohtrix Point Never, who came on board in the project late in the day. Over roilingdrones and a rhythm track reminiscent of Japan circa Tin Drum, Byrne describes some unnamed territory – possibly a map of neural pathways: “Here is an area—of great confusion / Here is a section—that’s extremely precise / And here is an area—that needs attention / Here’s the connection—with the opposite side”. Maybe due to Lopatin’s involvement it strikes a new, subtler, deeper note on the record. But once again it’s reminiscent of early Talking Heads – in this case “The Big Country” from 1978’s More Songs About Buildings And Food, with its alienated airplane passenger, surveying the flyover counties: “Then we come to the farmlands, and the undeveloped areas / And I have learned how these things work together.” Back then Byrne sang “I wouldn’t live there if you paid me.” This time round he yearns for the making rather than the unmaking of sense, reconciliation, intimacy and the acceptance of the here and now. Maybe, he suggests, this humble, pragmatic ideal is the real American Utopia.