David Bowie – Bowie At The Beeb 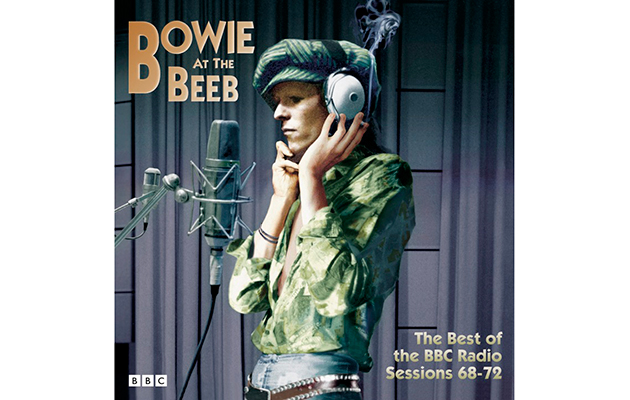 For an artist eager to stage-manage much of his life and career – including, as we discovered this year, his death – David Bowie was perversely happy to present his workings in public. Take 1973’s 1980 Floor Show TV special, where “1984” was previewed in an embryonic stage a year before it would appear on Diamond Dogs; or in December 1974, when a skeletal Bowie covered The Flares’ “Footstompin’” live on America’s Dick Cavett Show, and then thought nothing the following year of reusing Carlos Alomar’s riff for “Fame”.

Even the sheer number of references to movies, literature, philosophy and the occult in Bowie’s songs – from bardos to Billy dolls – practically invites the listener to peer beneath the surface and examine his influences and his bookshelves.

Bowie At The Beeb, reissued for the first time on vinyl after its release on CD in 2000, presents more of Bowie’s workings for our delectation. So quickly did he evolve between 1968 and 1972 that most of these sessions showcased songs that wouldn’t be in the shops for months. After four songs with the Tony Visconti Orchestra from 1968 and two recorded with Junior’s Eyes in late ’69 (not broadcast at the time), we find Bowie taking over Radio 1 for a full hour in February 1970. Though the session is still incomplete – no “Buzz The Fuzz”, “Karma Man” or “London Bye Ta-Ta” – we hear Bowie debut an incomplete, shorter “The Width Of A Circle” with his brand new sideman. “Michael’s just come down from Hull,” Bowie says. “I met him for the first time about two days ago.” And with the entrance of Mick Ronson’s aggressive, strangulated lead guitar, the sound of the Spiders From Mars is prematurely hatched.

An electric “Wild Eyed Boy From Freecloud”, recorded in March 1970, is darker and stranger when shorn of its syrupy orchestrations, and from the same session, unearthed for this vinyl reissue, is a full-band version of “The Supermen”. Recorded a month before the version on The Man Who Sold The World, this is sleeker, heavier and more dynamic, with Ronson’s mangled lead lines supremely exciting.

One of the strangest sessions took place on June 3, 1971: with Hunky Dory still six months away, Bowie was joined at the BBC by George Underwood, who sings “Song For Bob Dylan” (not included here), Dana Gillespie, Geoff MacCormack, Arnold Corns guitarist Mark Carr-Pritchard, and Ronno, a group consisting of Ronson, Trevor Bolder and Woody Woodmansey. The jaunty opener, “Bombers”, is sublime, with Bowie “on piano and an amazing pair of trousers”, according to John Peel, while “Looking For A Friend”, written for Arnold Corns, is strutting but slighter. With “Oh! You Pretty Things” subsequently lost, the most historically valuable selection from this session is “Kooks”, written by Bowie to celebrate the birth of his son Zowie four days earlier. “I’d been listening to a Neil Young album,” he tells Peel, “and they phoned through and said my wife had had a baby on Sunday morning. And I wrote this about the baby.” He professes to be unsure of the words, but this meditative solo take is actually strikingly similar to the Hunky Dory version, a testament to Bowie’s faith in intuition.

Just a month after Hunky Dory’s release in December 1971, Bowie was back at the BBC, now performing in the guise, if not the name, of Ziggy. Out are the quirky piano ballads, and in are sleazy rockers such as “Hang On To Yourself”, “Ziggy Stardust” and a propulsive “I’m Waiting For The Man”. Returning in May 1972, the Spiders preview a metallic “Suffragette City”, which tops the album version for sheer energy. There’s more Velvets worship too, with a brazen “White Light/White Heat” (“White light… gonna make me feel like Lou Reed”), while the Spiders’ take on “Moonage Daydream” presages the more bombastic Aladdin Sane, with Ronson’s guitar spewing molten chords and Bolder’s bass buzzing and blown-out.

Later the same month, Bowie must have been feeling nostalgic, for here we’re shunted back in time with “Space Oddity”, “Changes”, “Andy Warhol” and “Oh! You Pretty Things”, before a session the following day brings us back to Ziggy with “Lady Stardust” – Bowie sounding even more like Elton John on the opening line than on the album – and a rawer “Rock’n’Roll Suicide”.

24 days later, Ziggy Stardust was released, and David Bowie would have no more time to chat with John Peel about Chuck Berry songs. Instead, he’d be producing his hero Lou Reed, and Bowie and America would devour each other with delight and disgust. There would be no room for the Spiders, for BBC sessions or for Ziggy himself.

Still, the short period covered by Bowie At The Beeb is a pivotal and fascinating one; if you want to hear Mick Ronson at the peak of his powers, “Kooks” in its infancy, or an ensemble cover of “It Ain’t Easy”, you’ll find them all here, often as stunning as their ‘official’ versions. Ultimately, even when it seems as if Bowie is letting us peer behind the curtain to see the nuts and bolts of his work, the magic remains intact.

EXTRAS 7/10: Four heavyweight LPs housed in a sturdy box. “The Supermen” is previously unreleased, while the duo version of “Oh! You Pretty Things” was a Japan-only bonus track on the 2000 CD release.