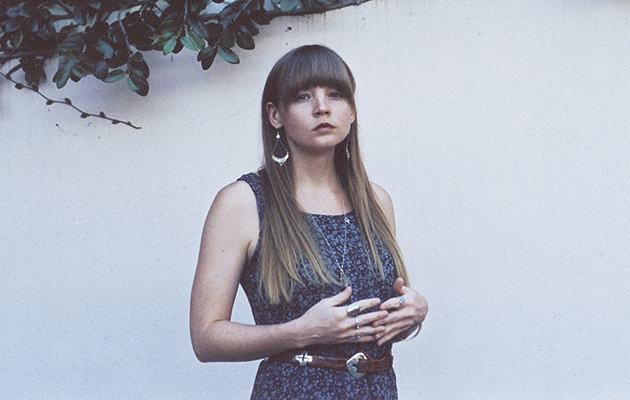 Honest Life may be her first European release, but Courtney Marie Andrews is hardly the neophyte. The 26-year-old Arizona native has been gigging for the past decade, either alone or with others, as well as negotiating a fair amount of session activity. Perhaps the most high-profile collaboration to date has been with US brat-rockers Jimmy Eat World, for whom she sang back-ups on 2010’s Invented (plus the world tour that followed) and this year’s Integrity Blues. Until recently, too, Andrews was Damien Jurado’s live guitarist.

Then there are her five prior solo albums, beginning with 2008’s Urban Myths, issued on tiny indie label, River Jones. Nevertheless, and mindful that she’s already withdrawn the first three of those, Honest Life is likely to serve as an introduction to most of us. In fact, and by her own admission, this is the record to which all roads have been leading.

The journeying metaphor happens to be a pretty apt one. Conceived in Belgium while touring with local singer Milow, Honest Life is the product of both heartache and homesickness. These are essentially break-up songs, their vulnerability made all the more acute by Andrews’ physical dislocation. But while there’s plenty of wistful candour, she doesn’t overdo the sentimental bit. It is, instead, a remarkably assured piece of work, gracefully furnished and artfully wrought.

Andrews has been eliciting lofty comparisons to Joni Mitchell back in the States. Certainly, tunes like “Irene” or “Not The End” are marked by that same crystalline glide and swoop, especially the manner in which she caresses the higher notes. Though there’s more of a quiver in Andrews’ voice that aligns her just as equitably to the late Judee Sill or, on the more countrified songs, Emmylou Harris. Like Harris, she has a natural ability to traverse folk and country with apparent ease.

Nowhere is this better illustrated than on “How Quickly Your Heart Mends” (regular readers may recognise the song from its appearance on Uncut’s 2016 Sounds Of The New West covermount CD). Over piano and pedal steel, steadied by a ticking rhythm, Andrews details the empty consolations of life with an airy elegance that leavens the song’s disconsolate mood: “The jukebox is playin’ a sad country song/For all the ugly Americans/Now I feel like one of them.” Others display a kind of stony wisdom that belies her relatively tender years. The baroque-styled “Only In My Mind”, her anguish cushioned by a dreamy string arrangement, suggests that we knowingly live with our own illusions, both as a comforting strategy and as protection against aspects of ourselves that we refuse to deal with. “In my mind, life was a road without any turns,” she sings, as if caught in an absent reverie. “Every chance was given/No hard lessons to be learned.”

The other musical strand at play here is Southern soul. Andrews has assembled a backing band capable of navigating the emotional and stylistic nuances of her songs. In particular, the subtle embellishments of pianist Charles Wicklander and pedal steel player, Steve Norman. Andrew Butler’s Hammond organ gives wings to “15 Highway Lines”, whose sedate acoustic strum eventually makes way for a Memphis beat and a gorgeous vocal line in which Andrews truly soars. “Put The Fire Out”, which examines the duality between letting go and reconnecting with your roots, is similarly endowed, with its shuffling piano and sudden urgency. One of several songs that were written after Andrews returned to Seattle to bartend at a tavern, it’s about as close as she gets to closure over her romantic woes, finding succour in the company of those with a shared experience: “There’s a place for everything/And I think I know mine now/Now that I’m off this plane I think I’m ready to stay.”

Perhaps the most intriguing thing about Honest Life is the options it presents. On this evidence, such is Andrews’ intuitive feel for disparate musical idioms that she could take a number of directions from here. She could just as easily go classic Nashville country as austere American folk. And she clearly has a great Southern soul album in her. For the time being, though, it’s enough to wallow in the possibilities.

Q&A
COURTNEY MARIE ANDREWS
You call Honest Life your coming-of-age record…
It feels like I’m at my most mature as a songwriter and finally have enough experience to make a record like this. It’s been a very therapeutic process. It’s amazing how heartbreak will change your values, how much it will shake the core of who you are and make you reassess your life. That’s where a lot of these songs about wanting to be back home came from. It’s a kind of break-up travelogue record.

Did you need to leave home in Phoenix, Arizona, in order to blossom?
Oh yeah. I’m definitely one of those people who grows very well amid change. I like to throw myself over the edge a lot of the time, just to see what happens. I’ve always thrived in that way. I’m a restless spirit, I think that’s just part of who I am. In fact, I’m currently in the process of moving from Seattle to LA. I’ve met a lot of great artists and musicians here, but I think LA is a lot more conducive to songwriters.

What’s next for you?
I’ve already started writing the next album and hope to record it in the spring, if I can nail down the time after my European tour. It’s really moving towards a soul kind of feeling, but there are also a lot of songs involving the empowerment of women. That comes from my love of Aretha Franklin and Odetta, those kinds of people. I’m already so excited about these new songs.
INTERVIEW: ROB HUGHES