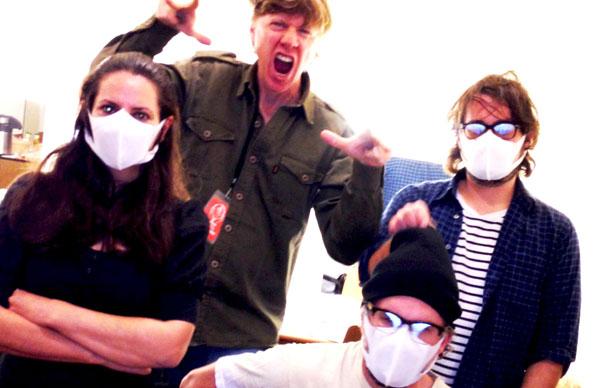 Sonic Youth may or may not have ended, but Thurston Moore doesn’t seem to be pausing too long for bouts of reflection. He’s always seemed like a tireless character and instigator, involved in multiple projects, meet-ups, noise blowouts, record labels, curatorial projects, chapbook publications, and the past year or so has been little different. There’s the teaching workshop gig (see panel below for more details). There are the ongoing noise/improv collaborations, including a recent duo with Chelsea Light Moving drummer John Moloney, Caught On Tape. There are the publishing houses: the Ecstatic Peace Library and its associated Ecstatic Peace Poetry Journal, and the smaller poetry imprint, Flowers & Cream Press. And all this connects with his ongoing romance with New York: when asked about his connectedness with the lineage of ‘New York School’ poets and creatives, Moore admits, “with Chelsea Light Moving I feel like I want to have the words of the city fly from my fretboard and my teeth in a very direct and charged way.”

Chelsea Light Moving also appear to be on the road a lot, floating from continent to continent. They are, in a very real sense, a working band. The individuals Moore has pulled together for Chelsea Light Moving all move in similar circles, part of that nebulous American underground that has housed the New Weird America, free-folk and neo-psych delirium. But the connective forces are even more blasted and open-ended, aesthetically or personnel-wise, than you’d expect. The group’s ranks include Samara Lubelski (bass), who has released a handful of graceful baroque-pop albums, but also a gorgeous drone duo with Hototogisu’s Marcia Bassett, Sunday Night, Sunday Afternoon; Keith Wood (guitar), who records beautiful acid-folk as Hush Arbors; and of course, the irrepressible Moloney, one of the heads of Sunburned Hand Of The Man.

Not too much of that agrarian weirdness has really worked its way into the 10 songs that make up the group’s debut album, admittedly. Moore is pretty much whittling away at his peculiar vision of songcraft here; many of these songs are modular, piecing together constituent parts into odd Frankensteins of rock anti-anthems. And while Chelsea Light Moving is far from a simplistic repro of Sonic Youth’s moves, it does sometimes illuminate what Moore brought to that particular equation: spindly, almost math-rock-y guitar interplay; melodic turns that meander down byways; broad-brush sweeps of heavy riffage; occasional bouts of clumsy out-of-tuneness; and a weirdly brutish pop heart, at times as willfully awkward yet compelling as Mayo Thompson of The Red Krayola. Sometimes, you can hear Moore exploring the songs as he goes, feeling out new terrain, sometimes stumbling and sometimes hitting the ace.

Unsurprisingly, it’s not always successful: that modular approach goes seriously awry on “Alighted”, where every twist and turn feels less agile and more forced than the last. But that doesn’t happen too often. Chelsea Light Moving are generally a heads-down, fighting force, capable of swinging with a Mastodon’s gait – “Groovy & Linda” is one of Moore’s most satisfyingly Neanderthal songs yet (at least, until that ungainly “don’t shoot” hardcore coda); “Burroughs” pounds the floor, with Moloney’s primal thud corralling the group into pulling out some of their most rock-reverent moves; and “Mohawk” is gorgeous, with Moore working his poetic tongue over a rumbling, Rhys Chatham-esque guitar pile-up.

Half way through “Empires Of Time”, Moore sings, in his by now patented half-yowl/half-sigh, “We are the third eye of rock and roll/We are the third mind of rock and roll.” Well, that’s a little ambitious for a group on their first run, pulled together out of unlikely circumstances and yet to fully find their feet as a fully working entity. But Chelsea Light Moving suggests there’s plenty of space to move around for Moore and his cohorts. This new group is neither a redux of his Sonic Youth moves, nor a solo project with sidekicks. Awkward moments or not, this group moves as one. The next album might well be the ticket.
Jon Dale

Q&A
Thurston Moore
Your music has always referenced textual culture, poetry, but Chelsea Light Moving seems to make this most explicit – “Frank O’Hara Hit”, “Burroughs”…
It may very well be the fact that I’ve been on faculty at the Summer Writing Workshop at the Jack Kerouac School of Disembodied Poetics at Naropa University in Boulder Colorado the last few years. Burroughs taught there quite a bit and to be able to be in a place where he was active, a school founded on Buddhist principles of engagement and founded by Allen Ginsberg and Anne Waldman, has allowed me to not only continue to investigate their world of alien America perspective but become spiritually immersed in their footsteps and fingerprints.

What other projects are you involved with now – I know there’s a collaborative album with Moloney out on Feeding Tube…
There are some other improv recordings being released – a very limited LP in benefit to Café OTO, that is a duo with me and reeds-maestro Alex Ward. And live recordings with Swedish free jazz sax demon Mats Gustafsson and, hopefully, an amazing session with prepared-guitar genius Bill Nace and jazz sax legend Joe McPhee that’ll blow yr mind, and a guitar duo freakout with Nels Cline. And I’m set to record a duo CD with John Zorn soon!
INTERVIEW BY JON DALE