Can – The Lost Tapes

This huge set of unheard cuts, forgotten by the band, restates the pioneers importance... 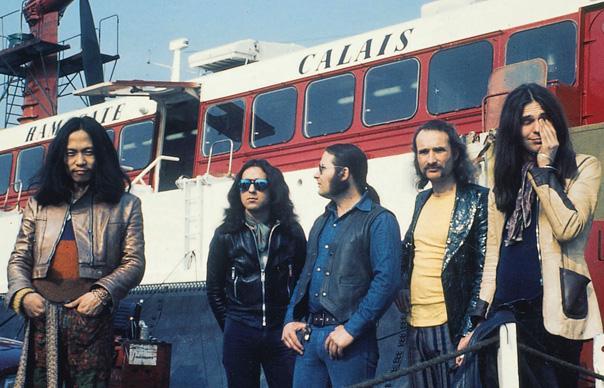 This huge set of unheard cuts, forgotten by the band, restates the pioneers importance…

It’s a testament to how far out Can’s music still seems, over 30 years after the band originally split, that we try to understand it not by looking for musical answers, but by clinging to fantastical suppositions. There are whispers about magic, the better to understand the ghostly power of the band’s Tago Mago album. There’s the notion that the group consulted a practitioner of Santería, a religion of West African/Caribbean origin in which drumming forms part of the ceremony – and that he confided to Can drummer Jaki Liebezeit the secrets of his art. He was, needless to say, subsequently executed.

Even the most basic, substantiated facts of Can’s decade-long career from 1968 (the band’s early base at Schloss Nörvenich outside Cologne, a castle owned by an art dealer, where the band on occasion played for his bemused guests; their subsequent home in a disused cinema at Weilerswist where the walls were lined with army surplus mattresses) seem to derive more from the imaginings of a novelist than the labours of a rock biographer.

And then there’s the music. The work of a unit comprising German scholars of modern classical composition, a free jazz drummer, and extemporising vocalists from other cultures entirely, the band recorded themselves ceaselessly. What gave us landmark albums like Tago Mago, the melodic, groovy Ege Bamyasi and the hypnotic and minimal Future Days was not only the spectral voicings of Irmin Schmidt, the savage soloing of Michael Karoli, the warm Morse code bass of Holger Czukay and Jaki Liebezeit’s “unhuman” drumming, but a process of editing – the democratic band at benign loggerheads, kilometres of spliced tape rising to their experimental knees. From chaos, sublime beauty. If the studio was a castle, what must their vault be like? The Can Archive, one imagines, is a place of sprawling chaos, but infinite possibility.

As The Lost Tapes goes some way to illustrating, again even that is not quite true. Certainly, Can ran tape on all their rehearsals, but they also approached their work economically and methodically – excerpting material from their tapes as they went with an eye to using it later, then recording over the unwanted tape. Compiled from 50 hours of such fragments, what is contained here, then, is a world away from that boxset staple, the “alternate take”. Instead, there is a rich mixture of the many areas in which the band explored: movie/TV soundtrack recordings, live tapes, promising but undeveloped rehearsal fragments, and hitherto unused compositions. All of which are valuable additions to our enjoyment of the core canon. The value here isn’t only that, though – it’s also the final testimony to, and product of, Can’s working methods.

“Spontaneous composition” was Can’s aim, and it was something the band achieved by a highly developed (as Irmin Schmidt describes it, “magical”) sensitivity to each other as players. Here that tendency is abundantly represented in two Malcolm Mooney-fronted tracks “Waiting For The Streetcar” and “Deadly Doris”, wherein the singer’s improvised lyrics direct a savage tempo for two longform workouts. Likewise, this collection makes choice selections from the band’s live tapes, in which tracks like “Spoon” roam in the moment far from their original co-ordinates onto other maps altogether. It’s in these locations where terrifying forays like “AbraCadaBraxas” and “Networks Of Foam” were also birthed.

“Spontaneous” however, did not mean Can achieved their finished product instantly. The Lost Tapes duly offers some thrilling glimpses inside the band’s studios, on the journey towards finished songs. On CD2, we can observe the gentle group playing of “A Swan Is Born” that highlights the gently thrumming of Holger Czukay’s bass, the background textures of Schmidt’s keyboards, and the enchanting melody plotted between them by Damo Suzuki – a journey that will eventually arrive at “Sing Swan Song” from Ege Bamyasi, one of the group’s most beautiful single works.

On CD3, we again enter the derangement of “Mother Sky”, a gigantic composition in the world of Can, and which fans will have heard in versions long (as it appeared on Soundtracks at 14-and-a-half minutes) and succinct (as edited for the great version on the Cannibalism compilation). Here, we join the track at what sounds like the very first four minutes of its travels: Michael Karoli’s screaming guitar tone is in place, as is a tribal pounding from Jaki Liebezeit, but we have yet to uncover the octave pattern of Czukay’s bass riff that will pilot the track onward. Likewise, on CD3, “Messers Scissors, Fork And Light” finds the group in a space that’s familiar but different, the mood set by Irmin Schmidt’s lightly flanging keyboard. Suzuki’s vocals gently suggest we are arriving in the neighbourhood of “Spoon”, but without actually stopping outside the house.

This, like other significant pieces on the album, derives from the band’s soundtrack work, and is a credit in part to the work of Jono Podmore. The man behind the Can remasters from 2004, it’s Podmore who has assumed for this project a similar role to that of Holger Czukay in Can – it has fallen to him to edit extant related fragments together in a coherent and a sympathetic way. These extend from freaky ambient recordings like “Evening All Day” (a ghostly piece that combines distant chatting, violin mangling and synth bubbling in jarring sequence), the contemplative “Private Nocturnal” (in which Czukay’s soft bass anchors some wafting synth and drifting vocal) to the violent (“Godzilla Fragment” which memorialises the band’s live noise tactic, the “Godzilla”) and frankly absurd (“The Agreement” is the sound of someone urinating).

Podmore is also behind the set’s most satisfying elements – the suites constructed from unused soundtrack fragments. Of these, all excellent, the most powerful is “Graublau” (a collage of material intended for the film Ein großer graublauer Vogel) which is simply jawdropping, explaining the affinity between Can’s sense of momentum and group space and the way post-punk bands could use their intelligence to occupy a similar space. It’s great. It makes PiL sound like The Moody Blues.

Sonic Youth’s Thurston Moore recalled his first experience of Can as finding this notionally “rock” group coming from a place completely “outside of rock”. The Lost Tapes confirms that pleasing impression and applies it to the boxset format itself. Here is virtuosity without ego, spontaneity rendered anew, and archive material of real contemporary value. It marks a definitive end to the band’s journey. Outside of rock doesn’t go far enough.
John Robinson

Q&A
Irmin Schmidt
Were these tapes really lost?
No, they were forgotten more or less. We always had tapes running, but 10 years’ tapes running all the time 12 hours a day would come to an unimaginably big pile, so we overplayed a lot of tapes. But perhaps a tape would have 10 minutes on it that we thought were good. So there were little snippets and bits and pieces of all kinds from all different periods on one tape. So it was all a big… chaos. So that’s why no-one wanted to touch it. But [Schmidt’s wife] Hildegard insisted I did this work. It was about 50 hours, but I found three hours that were really good.

Did you have any idea what was in there?
I knew especially there was the music that makes up “Graublau” on the album. I knew
that one particularly because I had done a very special work for that film where I recorded at home lots of tapes and loops from shortwave radio. So these sounds are brought to the studio and then we played to it. Then I took that and went to the editing room and made a montage for the film from all of that. I remembered that as being one of the really nice pieces. The pieces I heard with Malcolm [Mooney, original Can vocalist] were totally unknown to me. When I heard them, I remembered we had played them – but I didn’t remember before.

How did Can vocalists determine the character of Can music?
Can is one composer – if one member changes, the components are different, and it becomes a different organism. Our singers were not what you would call “lead singers”. Their voices were their instruments. They were instrumentalists who used their voice for being a member of the composition. But of course, when one went away or another came, something in the group changed because we all played so intently listening to everyone else – the whole chemistry changed.

How were things different with Malcolm and Damo?
There was a rhythmical connection between Malcolm and Jaki for instance, so they together almost formed a rhythm group. Later, there was a very obvious understanding between Damo, me and Michael, melodically, particularly with Damo and Michael – Holger, Jaki and me were 10 years older than Michael and Damo. They were of the same age and that changed the chemistry.

You tried out Tim Hardin as singer, didn’t you?
No! We did not try out Tim Hardin, that’s wrong. We met him at the hotel where he was on tour – somewhere in Birmingham or Leeds, somewhere in England. He just… came with us to the concert and came with us onstage and it was fun. I think he did it a second time, because he was in the mood and on tour. But there was no question that he would have joined the group – neither of us had that idea. He was a singer-songwriter, a fantastic singer-songwriter, but he had to make his own songs and he would not have fitted in this kind of thing.

Given the way you made music, were there a lot of arguments about the final composition?
Of course, sometimes things had to be discussed, and sometimes there were different opinions about things. But we didn’t aimlessly jam for hours, there was always some kind of spontaneous idea, and then we had to find the essence of it. This we would play over and over and find the right groove. Sometimes we would fight, but that’s normal when you have four very strong personalities. We didn’t have any personal kind of… problems.

There were 50 hours of tapes; this is three hours long. Is there more to come?
This is the final extract from the archive. More, there isn’t. There are another 47 hours not worth releasing, which will definitely disappear.
INTERVIEW: JOHN ROBINSON